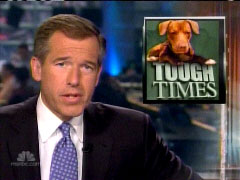 Going to extraordinary lengths to pull at the heartstrings of viewers, Wednesday's NBC Nightly News focused on, in the words of anchor Brian Williams, “the innocent victims of the foreclosure crisis” -- that would be dogs, pigs, goats and horses. Meanwhile, ABC discovered people are more likely to get murdered at work in these “hard economic times,” though they really haven't been. At the end of a story on a workplace shooting in which five were murdered, reporter Eric Horng acknowledged “workplace violence is down in recent years,” but he nonetheless ominously warned: “For smaller companies it remains tough to prevent, because security is costly. And in today's economic environment, disgruntled workers can be reluctant to discuss problems.”

NBC put “TOUGH TIMES” on screen with a picture of a puppy as Williams introduced the story reported by Chris Jansing who, back in May, centered a piece on an elderly couple forced to live in their van. This time, Jansing again delivered anecdotes, starting with a Seattle woman who “has never experienced anything like this -- not just dogs and cats, but horses, pigs, goats -- so many, she has to turn away three out of four animals.” Going south, she asserted that “in May, the number of animals turned into Los Angeles City shelters jumped 30 percent,” which hardly seems like a crisis, and a local official fretted: “Pets seem to be the silent victims of this whole economic downturn.” Jansing next conveyed the deadly consequences:

The harsh reality is, as more animals come in, more animals have to be put down....[A]t shelters across the country, euthanasia rates are going up.

Earlier in her report, Jansing featured another woman who broke into tears while she recalled: 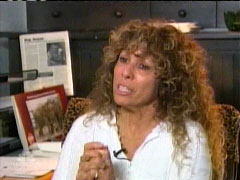 Williams teased at the top if his newscast: “Left behind: Have you thought about the other victims in the tragedy of foreclosures in the U.S.?”

He later plugged the upcoming report: “Innocent victims of the foreclosure crisis in this country, the ones we don't always think about.”

My May 2 NewsBusters posting, “NBC: Seniors Forced to Live in Van as Golden Years 'Tarnished,'” recounted, with video, the previous Jansing story portraying a few people as typical victims of a terrible economy: 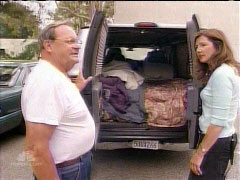 On the day the government reported a tenth of a point drop in the unemployment rate and two days after news of a second straight quarter of 0.6 percent GDP growth proved the nation is not in a recession, Friday's NBC Nightly News delivered a ridiculously shallow story, based on two anecdotes and a couple of advocates, to prove rising prices are forcing the elderly out of their homes and into vans and soup kitchens. Anchor Brian Williams promised "an interesting look...at the toll that rising prices, of things like gas and food, is taking on Americans living on fixed incomes."

Chris Jansing traveled to Northridge, California, just north of Los Angeles, where she found 82-year-old Betty Weinstein, stunned by a water bill, turning to a second reverse mortgage to stay in her home. But she at least still has a home. Jansing then highlighted an even sadder case: "Rising rents forced Scott and Kate Bishop to move out of this blue house and into their van, sleeping on a mattress in the back."

But it got worse: "And now high food costs have meant, for first time in their lives, the Bishops have gone hungry." Jansing cited no source for her claims as she asserted: "Soup kitchens and food banks are seeing record numbers of seniors asking for help for the first time in their lives," but "now donations here are down as middle class donors struggle to feed their own families."

Topping off the story, Jansing featured this from Weinstein: "It's not the golden years anymore, it's the tarnished years."...

From the ABC World News story on a Henderson, Kentucky workplace shooting in which five were murdered and the shooter committed suicide:

ERIC HORNG: While workplace violence is down in recent years, for smaller companies it remains tough to prevent, because security is costly. And in today's economic environment, disgruntled workers can be reluctant to discuss problems.

DR. ALLEN BROWN, DIRECTOR OF THE CENTER ON WORKPLACE AND SCHOOL VIOLENCE: This is particularly true in hard economic times, when they feel like their jobs are already at risk.

The MRC's Brad Wilmouth corrected the closed-captioning against the video to provide this transcript of the story on the Wednesday, June 25 NBC Nightly News:

BRIAN WILLIAMS: One thing in this country that's experiencing the opposite of inflation, home prices, which have, of course, led to a record number of foreclosures. And the people who are losing their homes in this country aren't the only ones suffering or losing out in this crisis. That report from NBC's Chris Jansing.

CHRIS JANSING: At Furrytale Farm outside of Seattle, a heartbreaking phenomenon is playing out.

JANSING: Pets given up by owners who have lost their homes to foreclosure.

SLOAN: You take as many as you can and you do the best you can and you cry yourself to sleep every night over the ones you couldn't take. All right, guys, now, no paws, just mouths. 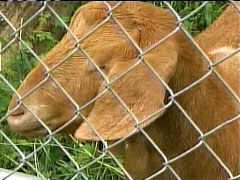 JANSING: In 30 years of rescuing animals, Suzannah Sloan has never experienced anything like this -- not just dogs and cats, but horses, pigs, goats -- so many, she has to turn away three out of four animals.

MELIA KAPLAN: Is it a national tragedy.

JANSING: Melia Kaplan has been rescuing animals for 15 years in California. Now she's opened a hotline for homeowners facing foreclosure.

JANSING: Shelters have been inundated where foreclosure rates are high -- from Florida to Michigan, Minnesota, Colorado, Arizona to California.

JANSING: In May, the number of animals turned into Los Angeles City shelters jumped 30 percent.

BOKS: Pets seem to be the silent victims of this whole economic downturn. 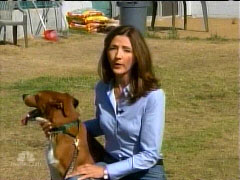 JANSING: And most of the surrendered animals aren't young and fuzzy. They're older, making it unlikely they'll get adopted. The harsh reality is, as more animals come in, more animals have to be put down. Now, Peyton is one of the lucky ones. He's being trained as potentially a bomb sniffing dog. But at shelters across the country, euthanasia rates are going up. Which is one reason why the Furrytale Farm is so attractive. It's a no-kill shelter. Joe Poltamos (sp?) hopes some day to reclaim his dogs.

JOE POLTAMOS: It's just not the animals, but you're giving up that part of your life.

JANSING: With 261,000 homes in foreclosure in May alone, a dog's life is suddenly much more tenuous. Chris Jansing, NBC News, Los Angeles.