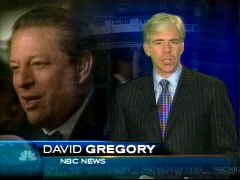 Three months after NBC promoted Al Gore's agenda by broadcasting more than 75 hours of his “Live Earth” concerts, Thursday's NBC Nightly News got the jump on the inevitable media excitement -- if Gore wins the Nobel Peace Prize to be announced Friday -- by championing how that award could launch a Gore presidential bid. Anchor Brian Williams cited “rumors today surrounding” Gore about the Nobel and pronounced “that an effort to draft him to run for President just might work.”

Reporter David Gregory trumpeted how Gore has supposedly “become both a global force tackling climate change and a celebrated figure now in the running for the Nobel Peace Prize.” Gregory highlighted the “Draft Gore” Web site and how “yesterday backers placed a full page ad in the New York Times.” Bizarrely suggesting Republicans would vote for Gore, Gregory contended “Gore is seen by some as a potential savior in the '08 race with questions about frontrunner Hillary Clinton's electability and a GOP field leaving many Republicans dissatisfied.” So, those who find Rudy Giuliani too liberal would prefer Gore? Gregory next featured Democratic strategist Steve McMahon praising Gore for how he “was right on just about every major issue, whether it was the war, the deficit or now global warming.”

Appearing with Today news reader and Dateline anchor Ann Curry during NBC's prime time coverage Saturday of Al Gore's "Live Earth" concerts, Gore gave a shout out to the network for its donation to his global warming cause, as Gore told Curry: "Thanks for what NBC has been doing." Curry didn't exactly deliver a hard-hitting interview. When Gore declared the concerts "the largest global entertainment event in all of history," she congratulated him before pressing him about running for President, suggesting that "without you there will not be the political will in the White House to fight global warming." 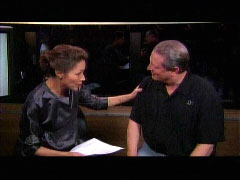 She pleaded: "A lot of people want me to ask you tonight if you're running for President. And I know what you're answer is gonna be, believe me. I gotta ask you though. After fueling this grass roots movement, if you become convinced that without you there will not be the political will in the White House to fight global warming to the level that is required, because the clock is ticking, would you answer the call? Would you answer the call, yes or no?"

In what will surely be one of the largest ever, if not the largest, in-kind contributions to a presidential campaign if Al Gore decides to run, NBC Universal announced late last week that its networks will devote an incredible 75 hours of time on Saturday, July 7 to showing Gore's “Live Earth: The Concerts for a Climate in Crisis.”

In addition to the entirety of NBC's prime time that night hosted by Ann Curry of NBC News, CNBC will carry seven hours of coverage from 7pm to 2am EDT; Bravo will show the concerts around the world for 18 hours starting at 8am EDT; and both the Sundance channel and the Universal HD channel will showcase the concerts for 22 hours each beginning at 4am EDT.

Rounding out the 75 hours, mun2 will run a two-hour show at 5pm EDT and Telemundo will air a one-hour special at 7pm EDT. And that's not counting how NBC's press release touted that “MSNBC will broadcast special coverage of this global concert event throughout the day with live reports from the concerts in New York and London.”

In fact, NBC changed the coverage hours a bit for its cable channels and ended up airing a few additional hours in total. 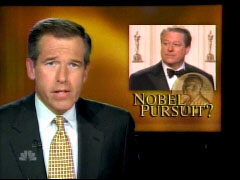 BRIAN WILLIAMS: Now to presidential politics and the rumors today surrounding former Vice President Al Gore: One, that he could be awarded the Nobel Peace Prize tomorrow for his work on climate change; the other, that an effort to draft him to run for President just might work. Our report tonight from NBC's David Gregory.

DAVID GREGORY: He has become both a global force tackling climate change and a celebrated figure now in the running for the Nobel Peace Prize. But does Al Gore still want to be President? This summer he said no, but not never.

AL GORE, JULY 5 TODAY SHOW: I don't have any plans or intentions to be a candidate.

GREGORY: Today an adviser said even the Nobel Prize is unlikely not change his mind.

MICHAEL FELDMAN, FORMER GORE ADVISER: I think all this is very exciting and interesting, but he remains focused on the issue that he's been working on for more than 30 years, and that's how to solve the climate crisis. 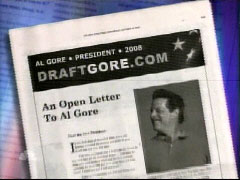 GREGORY: Supporters aren't giving up. There is a “Draft Gore” Web site and yesterday backers placed a full page ad in the New York Times.

BILL MCCORMICK, DRAFTGORE.COM: He offers two important things: One is eight years of experience in the White House, and second he offers an ability to win the general election.

GREGORY: Politically, Gore is seen by some as a potential savior in the '08 race with questions about frontrunner Hillary Clinton's electability and a GOP field leaving many Republicans dissatisfied. His entry may be a long shot, but Democratic strategists say he could immediately change the race, eclipsing the campaigns of Barack Obama and John Edwards.

STEVE MCMAHON, DEMOCRATIC STRATEGIST: He's gone from being somebody who left the stage to somebody who it turns out was right on just about every major issue, whether it was the war, the deficit or now global warming.

GREGORY: In an interview for Countdown with Keith Olbermann on MSNBC, Senator Clinton dodged a question about Gore's impact, saying only she hopes he wins the Nobel Prize.

SENATOR HILLARY CLINTON: I think we've got great candidates running. We have a wonderful field. You don't have to be against anybody.

GREGORY: If the elusive Gore does not run, the only question left is, who is he for? David Gregory, NBC News, Washington.