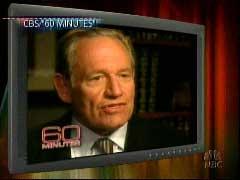 Is NBC News the publicity agency for CBS News? While Thursday's CBS Evening News had nothing on Washington Post reporter Bob Woodward's new book, for which he sat for an interview with Mike Wallace set to air on this Sunday's 60 Minutes, the NBC Nightly News led with the “explosive new book” about the Bush administration's “deception” on Iraq. NBC anchor Brian Williams hyped: “It alleges that attacks by insurgents on coalition forces in Iraq are worse than Americans have been led to believe. It also alleges a kind of campaign of deception on the part of the Bush administration.”

Reporter Jim Miklaszewski read aloud how Woodward “tells CBS's 60 Minutes 'it's getting to the point now where there are eight, nine hundred attacks a week. That's more than 100 a day. That is four an hour attacking our forces.'” Not until the very end of his piece did Miklaszewski relay how “military officials are strongly disputing Woodwards's figures on attacks against Americans in Iraq and just as strongly deny there is any attempt to hide the truth about the war.” But that didn't dissuade Williams from presuming Woodward's accuracy, as Williams proposed to retired General Barry McCaffrey: “Is this now the accurate portrait emerging of what's going on over there?" (Transcript follows)

Woodward's book, State of Denial: Bush at War, Part III, is being published Monday by Simon & Schuster, part of the CBS corporate empire and thus the timing of the promotion set for Sunday's 60 Minutes.

Thursday's CBS Evening News didn't plug the interview, though it probably will on Friday, and instead aired an Iraq story about money wasted there on shoddy construction projects.

A late afternoon posting on the DrudgeReport.com seems to have been NBC's resource, and CNN's The Situation Room hosted by Wolf Blitzer also pounced on the Drudge posting of a link to the CBSNews.com page with a summary of Woodward's allegations.

Now, a transcript of the September 28 NBC Nightly News story:

The tease from Brian Williams: “New allegations tonight that the Bush administration is keeping secrets about the level of violence against troops in Iraq.” 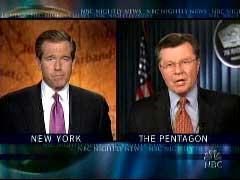 Williams led: “Good evening. An explosive new book, now just days away from store shelves, is tonight making news even before arriving on the market. It is the work of journalist Bob Woodward and according to advanced publicity materials released to the news media, it alleges that attacks by insurgents on coalition forces in Iraq are worse than Americans have been led to believe. It also alleges a kind of campaign of deception on the part of the Bush administration. While this news is just now emerging, this will not be a welcome development at the White House. We will start here tonight with the Pentagon angle, beginning with NBC's Jim Miklaszewski. Jim, good evening.”

Jim Miklaszewski: “Good evening, Brian. Now it's no secret that the Bush administration has tried to put the best face on the war in Iraq. But author Bob Woodward claims it's a deliberate attempt to deceive the American people about the worsening state of the war. 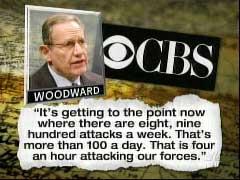 “Woodward claims President Bush and the Pentagon are concealing key intelligence that predicts the violence in Iraq will only get worse in the coming year. It's in his new book, State of Denial. Woodward also tells CBS's 60 Minutes [text o screen with CBS logo] 'it's getting to the point now where there are eight, nine hundred attacks a week. That's more than 100 a day. That is four an hour attacking our forces.' U.S. military officials have stated publicly the level of violence in Iraq is on the rise and confirm the number of attacks in Iraq is about 120 per day, nearly 900 per week. But that also includes attacks against Iraqi security forces and civilians, not only U.S. forces. In fact, the Pentagon's quarterly report on violence in Iraq publicly released last month shows nearly 800 attacks per week against all targets. But Woodward claims the Bush administration classified the information to keep it secret from the American people.”

Woodward, in clip from 60 Minutes interview: “There's public and then there's private. What did they do with the private? They stamp it secret. No one's supposed to know. Why is that secret?”

Miklaszewski: “Woodward also reveals that President Nixon's Secretary of State, Henry Kissinger, often meets with President Bush, advising him to stay the course in Iraq. And according to Woodward, 'Kissinger's fighting the Vietnam war again because in his view the problem with Vietnam was we lost our will.' And tonight, Pentagon and military officials are strongly disputing Woodwards's figures on attacks against Americans in Iraq and just as strongly deny there is any attempt to hide the truth about the war, Brian.”

Williams: “Jim Miklaszewski on duty at the Pentagon for us tonight, thanks. For more on this story, we are joined tonight by retired four star Army General and NBC News military affairs analyst Barry McCaffrey. And General, is this now the accurate portrait emerging of what's going on over there?”

McCaffrey, in DC: “Well, you know, Brian I must admit it didn't come as much of a surprise to me. I keep reminding people, 23,000 of our troops have been killed or wounded in this struggle so far and another, you know, considerable number in Afghanistan. It's $7 billion a month. We lose a battalion a month, soldiers and Marines, primarily killed and wounded. This is a real war.”

Williams: “I know you're a soldier and not a politician, but is it possible to fuzz numbers like these and how will this news be taken by America's military families?”

McCaffrey: “Well, I think, look, these soldiers and Marines are in constant e-mail contact with their families, post newspapers run pretty accurate articles. A lot of these troops are on their third or fourth combat tour now. America's military is at war. The CIA's at war and I would argue relatively few other people are really engaged. Certainly the other branches of government have been considerably detached from this on going struggle.”