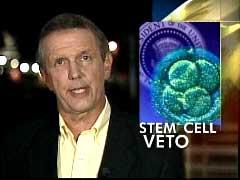 ABC News on Wednesday framed its coverage, of President Bush's veto of a bill to provide federal funding for embryonic stem cell research, from the point of view of those upset by his decision. Charles Gibson, anchor of the newly-named World News with Charles Gibson, delivered a tease and a plug which conveyed only the view of those in favor of the bill and earlier in the day, before the veto occurred, Good Morning America featured an uncontested pleading by actor Michael Fox in favor of the taxpayer funding.

Gibson teased, over video of Fox: "President Bush denies new funding for stem cell research, bringing outrage from some high-profile proponents." Before the first ad break, Gibson highlighted how Bush “vetoed expanded stem cell research and proponents are livid." GMA co-host Bill Ritter touted how “supporters believe this research could bring new hope to millions of people suffering from diseases like Parkinson's, people like actor Michael J. Fox, who spoke to us in a GMA exclusive.” Viewers then saw an uninterrupted minute and 45 seconds from Fox, who lamented how “I find it frustrating that the President will use his first veto of his time in office to thwart this research. It just seems a shame to me.” After the lecture, Ritter admired: "Michael J. Fox boldly in his own words."

After opening with, as quoted above, “outrage from some high-profile proponents,” Gibson's provided this plug before the first ad break:

“When we return, the day's other news, including a veto by President Bush -- his first in five-and-a-half years in office. He vetoed expanded stem cell research and proponents are livid.”

Gibson's introduction to the eventual story:

“President Bush did something today that he has not done since taking office. He issued his first veto, rejecting legislation to expand federal funding of research on stem cells from embryos. Scientists say the research could produce treatments for so many diseases, but the President said the research would violate the dignity of human life.”

Reporter Jake Tapper's story was much more balanced that Gibson's plugs. Tapper began with Bush's comments and the kids at the White House born from adopted embryos, before getting to supporters, including a clip of Fox. 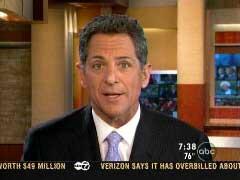 Viewers then saw 1:45 taped talk from Fox sitting in a chair in a living room setting:

"Personally, you know, I'd love to see these things solved in the next 20 years. Personally, I regret the loss of six years and five years where real progress could have been made. And I find it frustrating that the President will use his first veto of his time in office to thwart this research. It just seems a shame to me.

"I'm certainly respectful of those who oppose this research and their reasoning for it, but they do represent a minority and I think, I think that to make a choice to protect millions of cells that are going to be destroyed over protecting millions of living and soon to be living human beings and citizens of this country is, it's hard to get around that. I mean, I can't quite understand the reasoning behind it. 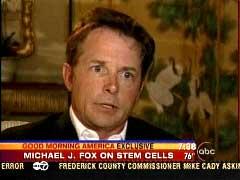 "People really want this and they've considered it and they've prayed on it and they've thought about it and I think you have to trust the American people, our scientists, our institutions, our facilities to really do the right thing and lead the way with this because it's going to happen anyway. So why doesn't it happen with American oversight and federal funding and with the enthusiastic and well thought out approach.

"Since when does America wait for somebody else to figure it out? I mean, we should figure it out. We've been blessed with resources and the intelligence and the spirit and the energy to tackle these kind of problems and we're all set to do it and we need leadership from the top to spur us on to do it. And if I can add my voice to it and for whatever reason get a little more attention, then I'm happy to do that. I see it as a responsibility and a privilege."

Ritter then opined: "Michael J. Fox boldly in his own words."