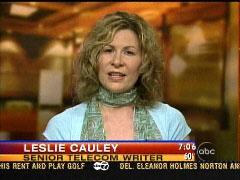 An editorial in Saturday's Washington Times highlighted the discovery by the MRC's Rich Noyes, as detailed in a Friday NewsBusters posting, about how “Leslie Cauley, the USA Today reporter who 'broke' the news that three major U.S. telecommunications companies were assisting the National Security Agency in building a database to more easily track any communications by potential terrorists, is listed as a donor to former House Minority Leader Richard Gephardt, according to a search of the Center for Responsive Politics Web site.”

The May 20 editorial, “Spinning, Spying and USA Today,” recounted: “With Verizon and BellSouth both challenging USA Today's report on their alleged participation in NSA's surveillance programs, it's not yet clear whether or to what extent the claims in the Gannett daily's much-discussed article are true. What's clearer is that USA Today reporter Leslie Cauley has ties to the Democratic Party, which the Media Research Center's 'NewsBusters' Web site unearthed yesterday. Searching through campaign-filing records, Rich Noyes discovered that Miss Cauley gave $2,000 to then-Democratic presidential hopeful Dick Gephardt in 2003. That's the type of activity that journalists normally avoid if they wish to be perceived as objective...” (How Rush Limbaugh also picked up the posting, follows)

The Washington Times also relayed another part of the Noyes item, noting “Cauley's collaboration with Democratic fund-raising heavyweight Leo Hindery, with whom she coauthored a 2003 book.”

Near the end of Friday's show, Rush Limbaugh briefly mentioned Cauley's donation and the RushLimbaugh.com home page this weekend features a link to the Noyes item on Cauley. Right under the picture of liberal Senator Patrick Leahy holding up Cauley's front page story, Limbaugh has a link to NewsBusters: “USA Today Writer Has Ties to Democrat Campaign.”
War on Terrorism USA Today Journalistic Issues