CNN's Cafferty: “If You Listen Carefully, You Can Hear the Word Impeachment” 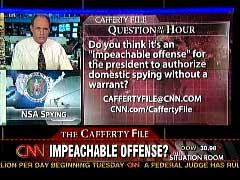 CNN on Tuesday afternoon gave credibility to the ruminations from a few hardcore leftists that President Bush should be impeached over authorizing, without prior court approval, eavesdropping on people within U.S. borders communicating with those abroad who have ties to al-Qaeda. Both Jack Cafferty and anchor Wolf Blitzer raised the subject during the 4pm EST hour of The Situation Room. Cafferty's question of the hour: “Do you think it's an impeachable offense for the President to authorize domestic spying without a warrant?” He set that up by insisting that “if you listen carefully, you can hear the word impeachment.” He asserted that “two congressional Democrats are using it, and they're not the only ones,” referring to how “Senator Barbara Boxer sent a letter to legal experts yesterday asking if they think the President's wiretapping of phone calls without a warrant is a quote, ‘impeachable offense,' unquote.” Cafferty cited the claims of John Dean and touted how Newsweek's Jonathan Alter “says that similar abuse of power was part of the impeachment charge brought against Richard Nixon in 1974.” (Tom Johnson filed a NewsBusters item on Alter's online rant.)

Sandwiched between Cafferty's question and his reading of e-mail replies, Blitzer set up a live interview with Boxer on Capitol Hill: “Some Democrats now are raising the possibility that Mr. Bush's authorization of the plan may be an actual impeachable offense. Joining us now, one of the staunchest critics, Democratic Senator Barbara Boxer of California. Precisely, Senator Boxer, where do you stand on this very sensitive issue of impeachment?" Blitzer did, however, soon move on to challenging Democratic spin on the “domestic spying” matter. (Transcripts follow.)

The MRC's Megan McCormack caught CNN's interest in highlighting impeachment calls and she provided a transcript:

At about 4:12pm EST on The Situation Room, Jack Cafferty, from Manhattan, raised the subject as he explained his question of the hour:

“If you listen carefully, you can hear the word impeachment. Two congressional Democrats are using it, and they're not the only ones. Senator Barbara Boxer sent a letter to legal exerts yesterday asking if they think the President's wiretapping of phone calls without a warrant is a quote, ‘impeachable offense,’ unquote. Boxer was on a radio show over the weekend with Nixon's former White House counsel John Dean. According to her, Dean said that Mr. Bush is the first president to admit to an impeachable offense. A Democratic representative from Georgia, John Lewis said in a radio interview, the President should be impeached if he broke the law. And Jonathan Alter points out in a piece in Newsweek magazine that if the Democrats get control of the House and Senate next year, impeachment is a possibility. He says that similar abuse of power was part of the impeachment charge brought against Richard Nixon in 1974. But according to the Capitol Hill newspaper Roll Call, top Senate Republicans consider even the talk of impeachment to be irresponsible and Democrats like Joe Lieberman and John Kerry say it's not time to talk about impeachment yet. So here's the question: 'Do you think it's an impeachable offense for the President to authorize domestic spying without a warrant?' You can e-mail us at Caffertyfile@cnn.com or you can go to CNN.com/cafferty file.”

Wolf Blitzer, in DC, predicted: “You're going to get a lot of good e-mail on this, both sides and maybe some other sides as well, Jack. Thanks very much.”

Then at about 4:35pm EST, Blitzer introduced Boxer: 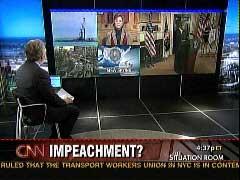 "We'll go back now to the unfolding controversy here in Washington over the President's plan to eavesdrop on terror suspects without court warrants. Some Democrats now are raising the possibility that Mr. Bush's authorization of the plan may be an actual impeachable offense. Joining us now, one of the staunchest critics, Democratic Senator Barbara Boxer of California. Precisely, Senator Boxer, where do you stand on this very sensitive issue of impeachment?"

Senator Barbara Boxer, from Capitol Hill: "Well, I stand on this ground. I was at an event with John Dean and if your, I think your viewers remember him, or at least they've read about him, he was, of course, the White House counsel when Richard Nixon faced impeachment hearings and, of course, he resigned before them, had to do with abuse of power. And we were both asked about this question of surveillance on American citizens without a warrant. And I was very cautious in what I said. I said, look, it's worrisome to me. I don't see where he has the right in the court, in the law to do this. And I called for hearings and I said it was great that Arlen Specter said we would have hearings. John Dean said it was the first time he had heard a president admit to an impeachable offense. And it, it took me back because I think he certainly is one of the most knowledgeable people on executive abuse of power. So what I did was, I took his statement, I got permission from him to use it and I sent it off to four scholars, constitutional scholars, to see what they think, and I'm calling for hearings on this."

Blitzer: "So you're not ready at this point to say that he should be impeached."

Boxer: "Oh, no, but I do have tremendous respect for John Dean on this question, and he felt very strongly. The other thing I've done is, I've spoken, for example, to Senator Joe Biden who wrote the very law that is supposed to be followed here. He's very, very concerned. You know, all this talk by the President and the Vice President, oh, we don't have time to go to a court. There's emergencies here. Well, I'm sure it's true, but that's why our law allows a president to go right away and apply for those warrants retroactively within 72 hours. There is no excuse why they can't subject themselves to checks and balances in behalf of the American people to protect us, of course, from any threat, but also to protect our liberties and our freedoms."

Blitzer moved on to some challenges to Democratic spin:

"The Democratic minority leaders in the Senate and the House, as well as the ranking Democrats on the intelligence committees in the House and the Senate, were all informed by the White House, specifically by Vice President Cheney, about what was going on. Do you feel they were negligent in not reacting more vocally or aggressively, behind the scenes, under a classified nature to try to stop this?"

Boxer: "Well, that's the point. They did. If you, if you, saw today where Jay Rockefeller, one of the people who was, quote unquote, ‘informed' was very concerned about this. And happily, I am so happy he did this, he caught the Vice President in another, if I might say, untruth. The Vice President said, oh, no one said a word about this, everyone, you know, essentially agreed. Jay Rockefeller wrote a letter, in his own handwriting, cause he was prohibited from telling anyone about this. He wrote a letter to the Vice President and put it in a safe in the Intelligence, Senate Intelligence Committee room and brought it out, where he's telling the Vice President in this letter, I have serious concerns about this. I'm very worried about this. So that's another fact, you know, that just is not in evidence that the people agreed with, that they didn't."

Blitzer: "On that point, Senator Roberts of Kansas, the chairman of the Senate Intelligence Committee disputes that point. He says that Rockefeller, who was the vice chairman, he said, ‘I have never heard any objection from him about this valuable program.' Roberts goes on to say, ‘now when it appears to be politically advantageous, Senator Rockefeller has chosen to release his two and a half year old letter. Forgive me if I find this to be inconsistent and a bit disingenuous.' So he's, he's challenging Senator Rockefeller."

Boxer: "Well, let me just say, well, that is just tragic, because if Senator Rockefeller had come out with this before, he could have been kicked out of the United States Senate. This was highly classified-"

Blitzer: "But he could spoken with Senator Roberts about it."

Boxer: "Wolf, Wolf, let's get to the facts here. You know, if, if, if Senator Roberts has a problem with Senator Rockefeller, fine. But the bottom line is Dick Cheney said everyone who was briefed just went along with this. They were told. No one complained. That is a falsehood, on its face. It's absolutely a falsehood. And then the President, last year in April of '05, talks and it looked to me like it was off-the-cuff, reassures the American people, don't worry. When we spy on you, we always get a warrant. So, you know, this is a very serious situation here. And the facts will speak for themselves. You know, the greatest thing about America is the truth always comes out. And especially when there's lots of people who are after the truth. Lots of people are after the truth, and I think we will find out exactly why they couldn't take time to get a check and balance on their work, go to the court. Again, the court has a history of always granting these warrants, except in the most unusual circumstances. They even had a way to do it retroactively and yet they didn't do that."

Just before the end of the hour, Cafferty returned with the replies:

“Question of the hour is this: 'Do you think it's an impeachable offense, impeachable, for the President to authorize domestic spying without a warrant?' Tom in Washington, Virginia, writes, ‘Yes, I do think that unauthorized wiretaps are an impeachable offense as Nixon proved. Mr. Bush’s contemptible administration believes that a frightened populace is more easily malleable, so they forever wave the bloody shirt of 9/11 to justify doing, well, just about anything they want. And if you disagree, then you're helping the terrorists win. But when was the divine right of kings reinstated? Did I miss a meeting somewhere?’ Zach in Chevy Chase, Maryland, ‘While the authorization of the spying itself might not be an impeachable offense, it is certainly unconstitutional as it skips the check and balance of judicial review. Whether or not you trust Bush now to only spy on terrorists is irrelevant. If this surveillance is found to be legal, any future president can spy on Americans for any purpose without any oversight.’ Michael in Redwood City, ‘It’s certainly more of an impeachable offense than was Bill Clinton’s affair with Monica. George learned from Bill’s experience though and avoided the perjury trap by admitting his transgression up front, and then challenging us to do something about it. He probably won’t be impeached, too many Republicans in Congress for that, but history won’t be kind to him either.’ Joe in Sioux Falls, South Dakota, ‘Absolutely not. The constitution grants no right to privacy. The courts have. Why don’t we just hand over the entire playbook to the terrorists? The mainstream media seems to every time a covert procedure could gain an advantage.’ Palm in Reynoldsburg, Ohio, Pam, rather, ‘Does this mean Watergate was not a crime?’ And Lance in Madison, Wisconsin, ‘I’d love to chime in on your question today, but I believe my e-mails are being tapped, so I’ll refrain from answering.’”

Blitzer quipped: “Maybe Lance knows something we don’t know, thanks very much, Jack.”