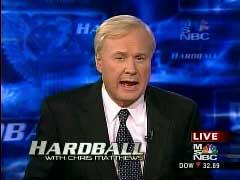 MSNBC's Chris Matthews assumed pernicious wrong-doing on the part of Bush officials and cited facts not in evidence as he opened Wednesday's Hardball by presuming Valerie Plame was a victim, though her publicity-seeking husband was incompatible with keeping her employer secret. Matthews declared that the “FBI closes in on the bad guys,” described Plame as “undercover CIA agent” and touted how she “was a courageous spy for her country,” even though she was working at CIA headquarters and her specific status is in dispute. Bob Novak, for instance, reported that her overseas career was over. Matthews proceeded to assert that her neighbors had “no idea” of what job she held “until quote, 'high administration officials,' closed quote, exposed her to America's enemies.” Full transcript of the show opening delivered by Matthews follows.

Matthews opened the October 26 Hardball, live at 5pm EDT and on tape at 7pm EDT:

“Dragnet. The FBI closes in on the bad guys. Agents hit Joe Wilson's neighborhood, asking if the folks next door knew that Mrs. Wilson was an undercover CIA agent. They didn't. Even social friends living a few yards away had no idea their neighbor was a courageous spy for her country. No idea until quote, 'high administration officials,' closed quote, exposed her to America's enemies. That is the mystery which special prosecutor Patrick Fitzgerald has been charged to solve in a case that could crack open at any hour. Let's play Hardball."

Matthews has been on a crusade over the past few weeks. An October 19 NewsBusters posting, for instance, recounted: “The first words out of Chris Matthews' mouth, at the top of Wednesday's Hardball on MSNBC, raised the specter of Watergate: 'What did the President know and when did he know it?'”

An October 11 NewsBusters item relayed how “Matthews led Monday’s Hardball by framing the Valerie Plame case around her husband Joe Wilson’s spin on the case, despite inconsistencies in his claims and how a much more innocent explanation is equally plausible -- that White House officials just wanted to explain why such a publicity-seeking critic, who claimed he was on a mission for the Vice President, would have been sent to Niger to check out whether Iraq sought uranium.”

That article included an excerpt from a Weekly Standard story which documented Joe Wilson's inconsistences and inaccurate claims.

Go to this page for all of the NewsBusters postings about Chris Matthews.
Valerie Plame Disclosure Hardball