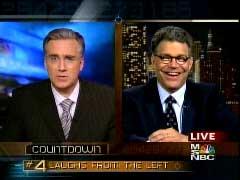 Cued up by MSNBC's Keith Olbermann on Tuesday's Countdown, Al Franken repeated the same “joke” he told on Letterman and the Today show about how he's “worried” that “Rove and Libby and others...may be executed." Olbermann then quipped: “But it would be a hell of a story for cable news." To which Franken chipped in to laughter from Olbermann: "It would. Especially if it got to the President and the Vice President because, and I think there should be a constitutional amendment passed as soon as possible that we can't execute either a sitting or recently-impeached President and Vice President." Olbermann picked up on a Monday NewsBusters item by Dave Pierre which highlighted how “in a 'comedy' skit for a promotional video at Amazon.com, Al Franken knees a self-described 'right-wing jerk' in the groin.” After playing an excerpt from the video, Olbermann didn't mention the name “NewsBusters,” but made his target clear as he denigrated the MRC's President: “One of the blogs affiliated with noted media watcher Brent Bozell, or as he's sometimes known, 'Red Beard the Pirate,' asks, 'Is there a theme of violence in Al Franken's work?'"

A transcript of most of the October 25 Countdown interview, as provided by the MRC's Brad Wilmouth who corrected the closed-captioning against the video:

Keith Olbermann: "'When I despair,' said the pacifist and revolutionary Mahatma Gandhi, 'I remember that all through history the ways of truth and love have always won. There have been tyrants and murderers, and, for a time, they can seem invincible, but in the end, they always fall.' Think of it: Always. Our number two story in the Countdown, perhaps in the last two years, those who have opposed the war in Iraq or the current administration or both have fallen back on Gandhi's words. Well, his, or those of my next guest: Al Franken. Consider: The Vice President and former CIA director now implicated in the CIA leak investigation, Scooter Libby and Karl Rove may be on the eve of indictment or resignation or both, and there's a Tom DeLay mugshot and a Bill Frist SEC investigation. Now, here to tell us 'I told you so,' is the author of a book officially on sale for the first time, by remarkable coincidence, just today, The Truth (with Jokes) by Al Franken. Good evening, Al. Thanks for coming on."

Olbermann: "Well, let's dive right in. The way the CIA leak investigation is playing out must really have shaken your faith in four men who I know are your personal heroes: Scooter Libby, Karl Rove, Dick Cheney and George W. Bush."

Al Franken: "Well, you know, what worries me about this is that, I mean, this does follow a pattern with Rove, which is that he has through the years smeared people. But this is a, this is outing a CIA agent, which George H.W. Bush, the President's father who headed the CIA, said was treason. And what I'm worried about is that that might be the indictments, and that Rove and Libby and others may face, may be executed."

Franken: "That's what I'm worried about. And I think that, I'm against the death penalty."

Olbermann: "But it would be a hell of a story for cable news."

Franken: "It would. Especially if it got to the President and the Vice President-" [Olbermann laughs]

Franken: "-because, and I think there should be a constitutional amendment passed as soon as possible that we can't execute either a sitting or recently-impeached President and Vice President."

Olbermann: "Well, I mean, there have been signs of life. We've reviewed the videotapes, and there are clearly signs of life in both of them, so that would just be a horrific thing to have happen."

Franken: "Well, it would be demoralizing, don't you think?"

Olbermann: "With the new book, The Truth (with Jokes), we already have some controversy. We found a very unusual, some might say disturbing, video on the Web. And I thought you should get a chance to respond to this, but let's play the tape first."

Franken: "Well, thank you. Now, you must be Scott from Colorado."

Franken: "And how many stars did you give Lies?

Scott: "I didn't read it. I'm just a right-wing jerk. That's why I said in my review that you want the terrorists to win."

Scott: "And that you've never been funny."

Olbermann: "Now, as one of the blogs affiliated with noted media watcher Brent Bozell, or as he's sometimes known, 'Red Beard the Pirate,' asks, 'Is there a theme of violence in Al Franken's work?'" [Franken laughs] Now, apart from the infamous scuffle that day on Jeopardy with Alex Trebek-"

Olbermann: "-is there a theme of violence in your work, sir?"

Franken: "I don't think so. Brent, I mean, this is great. And what it is, it has steered all these people to Amazon, especially like right-wing people who are going like, 'Count me out, Amazon, from ever,' well, you know, 'going into your Web site again.'"

Franken: "'Violence isn't funny.' I mean, this would be like showing The Terminator and saying, 'Is Arnold Schwarzenegger like killing a lot of people?' This was obviously what it is. It's a video that we made for Amazon at, you know, and it's a fantasy of every author who goes on, has a book and is reviewed on Amazon-"

Olbermann: "By anybody who comes along and just has a computer modem."

Franken: "-and gives you a one, not having read the book."

A bit later, Franken dismissed the claim there's any liberal bias in the mainstream media:

Olbermann: "And that gets us back, as a last point, to where I started this segment. You were good enough to come on this newscast with me late in the summer of 2003 -- it was August or September -- and by coincidence, either the next day or the day before, Janeane Garofalo had been a guest on the newscast. And I got called into a vice president's office here and told, 'Hey, we don't mind you interviewing these guys, but should you really have put liberals on on consecutive nights?' That's just over two years ago."

Olbermann: "Al, can you believe that the country was actually at that point that recently?"

Franken: "I can believe that, and I can believe, see, that, when you hear that there's this liberal bias to the mainstream media, I mean, you're attesting to the fact that a vice president at MSNBC was, you know, two nights in a row to have two liberals if you can, if you, and this is a crude way to do it, but if you, if you put, divide people into liberals and conservatives, the chances of that are one-half. I mean, essentially, aren't they? Or are they one-quarter? I guess it's one-quarter that you would have two of any kind-"

Franken: "-on two consecutive nights. But over the span of, how many years have you been on now?"

Olbermann: "This is our, we're at about two and a half now."

Franken: "Okay, after two and a half years, you'd think that might happen a few times."

Olbermann: "Yeah. Thank goodness we have steered out of that time, and, Al Franken's new book is The Truth (with Jokes), and the prospect of another Fox lawsuit has been obviated because the cover is one big picture of him. Thank you, Al. All the best."