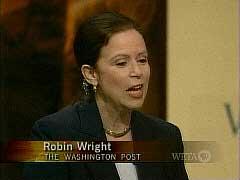 Washington Post foreign affairs reporter Robin Wright has no sense of humor -- at least when it comes to a conservative daring to make any kind of joke related to women in the workplace, even a little girl. Saying “I don't know whether they were quips,” on Friday's Washington Week on PBS, Wright proceeded to act offended as she made clear that “as a woman” she was “struck” by how, in the Reagan-era memos written by Supreme Court nominee John Roberts, he “questioned whether it was a good thing for a woman to go back later in life to law school” and he dubbed, as a “little huckster,” a Girl Scout who wanted to sell some cookies” to President Reagan. The humor-challenged Wright arrogantly judged: "I have to say, you know, one case of this is one thing, but to see this repeatedly was really striking, as a woman, to me."

Host Alan Murray pointed out that Roberts' asides were “jokes” and, as noted in an earlier NewsBusters posting by me about the Post's deliberate distortion of his quip in a story headlined “Roberts Resisted Women's Rights,” his remark about homemakers becoming lawyers was a slap not at women but at how there are too many lawyers. NBC's Pete Williams, however, chimed in with how “the President of NOW said his views are, quote, 'neanderthal.'"

That August 19 Post article, which carried the bylines of nine Post reporters, yet not Wright's (who came aboard the PBS show to discuss Iraq), included one paragraph about the innocuous memo, on a Girl Scout, which so upset Wright: “In a memo to [Reagan White House counsel Fred] Fielding dated May 7, 1985, Roberts addressed the ethics of allowing a Falls Church Girl Scout to meet the President in the midst of the annual cookie drive. 'Elizabeth...has sold some 10,000 boxes and would like to sell one to the President. The little huckster thinks the President would like the Samoas,' he wrote, before concluding that he had no objection to deviating in this case from the White House's practice of avoiding 'an implied endorsement' by the President.”

MRC news analyst Brad Wilmouth corrected the closed-captioning against our video to provide this transcript of the relevant portion of the August 19 discussion:

Fill-in host Alan Murray of the Wall Street Journal: "Well, it's just a couple of weeks to go before Supreme Court nominee John Roberts appears before Congress, and the search is still on to figure out exactly who he is and how he might vote when he's on the court. Pete, this week you got, what, 71 boxes of information, 39,000 documents. I'm sure you read them all personally."

Pete Williams, NBC News: "If my bosses are watching, the answer is yes."

Murray: "What have we learned about this man?"

Williams: "Well, we've now seen about 50,000 pages that have been released from the time he was at the Justice Department working for Attorney General William French Smith, and then at the White House in the White House Counsel's Office under President Reagan. It certainly makes it very clear that this is a conservative man in perfect harmony with the Reagan administration's conservative philosophy. We did get some insights into his personality from the documents this week. There's no doubt this is a very smart man, thorough, a sense of humor, although that may get him into trouble. And this week's papers, unlike the earlier ones that were very in-depth treatments of questions like, 'Can you take jurisdiction away from the Supreme Court?' These tended to be sort of passing comments on issues that came rushing past his desk. For example, we learned that 22 years ago, he favored a national ID card to deal with what he called 'uncontrolled immigration,' even though, oddly, the Reagan administration opposed a national ID card. He also said, again, in a sort of passing comment, that when the Supreme Court struck down the posting of the Ten Commandments in public schools in Kentucky, that this, quote, 'betrayed a hostility to religion that was not demanded by the Constitution.'"

Robin Wright, Washington Post: "Pete, let me ask you, as a woman looking at some of the quotes from these documents, I was really struck. And I don't know whether they were quips, but they were in White House documents that were destined for a presidential library. In one case, he talked and questioned whether it was a good thing for a woman to go back later in life to law school and whether this was a good move or a wise thing for, you know, and, secondly, he talked about a Girl Scout sale, bringing the, a Girl Scout who wanted to sell some cookies to the-"

Wright: "The little huckster, and I have to say, you know, one case of this is one thing, but to see this repeatedly was really striking, as a woman, to me." [Wright did not speak again]

Murray: "But the law school comment, wasn't that really more of a slap at lawyers than it was, he said that, 'Is it good for society for people to go from being homemakers to being lawyers?'"

Williams: "Let me tell you what the quote was. This dealt with someone who was eligible for a scholarship sponsored by Clairol. And the question was whether a White House employee should be nominated for it and should be able to accept this scholarship. He said, 'Fine, and she should even keep the money if she wants to.' Then he said, 'Some might question whether encouraging,' oh, and the person nominating her said that one of the reasons that she was a great person was that she had encouraged homemakers to become lawyers. He said, quote, 'Some might question whether encouraging homemakers to become lawyers contributes to the common good.'"

Williams: "Now, you could say, you know, the last thing we need is more lawyers, perhaps is what he was saying. Some women's group say that it betrayed a certain insensitivity. And they put it together with other remarks that he has made about women that we've seen in these papers over the last couple of weeks. He went on a tear against a doctrine that was sort of hot in the mid-'80s called 'comparable worth,' which was a sort of a riff on 'equal pay for equal work.' What it said is you should have equal pay for jobs that have the same value to society, so a truck driver and a laundry worker, that's about the same value to society even though men tend to do one, women tend to do the other, they should pay the same. He called this 'staggeringly pernicious' and 'anti-capitalist,' and, you know, I guess you should say the courts did ultimately drift away from this idea, it's not exactly one that has a lot of currency right now. On the Equal Rights Amendment, he referred to what he called the 'purported gender gap,' and elsewhere he talked about what he called the 'perceived problem of gender discrimination,' so this is not exactly the NOW poster child, and, as a matter of fact, the President of NOW said his views are, quote, 'neanderthal.'"