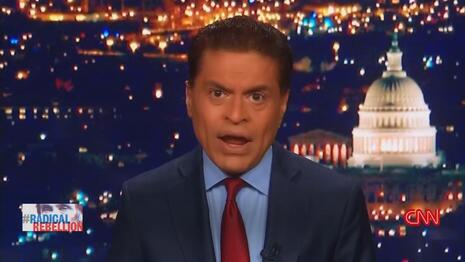 There really is no better place than CNN to go for left-wing indoctrination. After accusing Fox News on Friday of being a "propaganda arm" for "radical" right-wingers, CNN host Fareed Zakaria got to show off his own production of liberal propaganda Sunday night in the CNN special, A Radical Rebellion: The Transformation of the GOP. Keep in mind, this was an hour-long piece of documentary propaganda.

Ignoring the fact that both political parties have moved further toward the views of their bases over several decades, and have sometimes entertained far-fetched theories about the other side, the CNN host spent an hour singling out Republicans, accusing conservatives of being a party of fringe conspiracists obsessed with race.

After detailing the internal struggles of the party since the 1950s, Zakaria recalled that conservatives were unhappy at the George W. Bush administration for pushing big government programs, and then suggested that President Barack Obama's race was a breaking point: "It was, of course race -- the issue Republicans had happily exploited -- that would finally push the party to the edge. A black President in the White House triggered a dramatic response."

Then came a brief clip of then-Fox News host Glenn Beck accusing President Obama of racism when he appeared as a guest on a July 2009 episode of Fox & Friends: "This President, I think, has exposed himself as a guy over and over and over again who has a deep-seated hatred for white people..."

As can be seen in a longer version of the clip, Beck was responding to President Obama because he had just recently pre-judged a couple of Cambridge police officers as having acted "stupidly" in the Henry Louis Gates arrest controversy. Beck also recalled Obama's acceptance of the radical Reverend Jeremiah Wright as his pastor for decades and his radical sermons.

Notably, Fox & Friends co-host Brian Kilmeade pushed back on Beck's claim of racism as an exaggeration.

The CNN host not only ignored the fact that Bush had been the target of plenty of vitriol from the left (both before and after he was elected), but it was also certainly not the first time that a Democratic President inspired strident reaction from conservatives. During President Bill Clinton's tenure, Republicans pursued many allegations of scandal against him, eventually impeaching him, and there were even conspiracy theories that the President had had people murdered.

Concluding the special, after complaining that Republicans "see opponents as traitors and devils," he then declared that the party is in need of an "exorcism" to remove its "demons."

This heavily one-sided piece of liberal propaganda was sponsored in part by Samsung. Their contact information is linked.

A Radical Rebellion: The Transformation of the GOP

FAREED ZAKARIA: That disappointment would turn to rage during Bush's failed war in Iraq, and the financial crisis, and the bailouts that Bush supported.

DAVID FRUM, THE ATLANTIC: It just destroyed and discredited everything he was trying to do, and left the way open for different kinds of radicals to struggle for power.

ZAKARIA: It was, of course race -- the issue Republicans had happily exploited -- that would finally push the party to the edge. A black President in the White House triggered a dramatic response.

GLENN BECK, EX-FOX NEWS HOST (appearing on Fox & Friends) This President, I think, has exposed himself as a guy over and over and over again who has a deep-seated hatred for white people --

ZAKARIA: The base began not only to hate Obama --

SEAN HANNITY, FOX NEWS HOST: What is wrong with this President?

ZAKARIA: -- but to despise GOP leaders for being unable to stop him. They soured on the Bushes, on John McCain, on Mitt Romney, searching instead for someone who would embody their rage, and finally give them their revolution.

ZAKARIA: This was the beginning of a calculated two-faced dance by Republican politicians -- not voicing the conspiracies themselves, but embracing the conspiracy theories. But now, ever since Donald Trump's election, Republican officials have mostly dispensed with the denials and the condemnations of the crazies.

EX-CONGRESSMAN JEFF FLAKE (R-AZ): You had Trump's main animating vision in his campaign was birtherism, and that Barack Obama was not a citizen. And that was coming from the candidate.

ZAKARIA: They have come to see that openly feeding anger, resentment, and paranoia is good politics on the right,

PRESIDENT DONALD TRUMP: It was a landslide election,

CONGRESSWOMAN MARJORIE TAYLOR GREENE (R-GA): We aren't going to let this election be stolen by Joe Biden and the Democrats.

ZAKARIA: The Republican base has been misled by party leaders who have for years fed their fears and have now created a Frankenstein's monster.

ZAKARIA: But Republican politicians are now riding the back of a tiger, and they can't get off. Reagan, Gingrich, Trump -- all the icons on the right whipped their followers up into a froth of hysteria, and promised that they will repeal and reverse most of these terrible trends. But, of course, it never happens, which makes the Republican base grow more and more angry. And, as their sense of betrayal grows, so does their sense of desperation that American civilization is in great danger of collapse.

There is a great and honorable space in America for a party of limited and efficient government that values traditionalism, and that believes that social change should take place slowly and organically. But that's different from a band of ideological warriors with apocalyptic visions that fear the End of Days, seeing opponents as traitors and devils, and believes that all methods are sanctioned in its battle to save civilization and itself. In short, the Republican party needs to have a political exorcism, drive out its demons, and come to terms with the modern world.