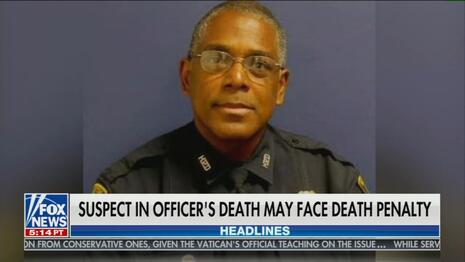 Over the past week, most of the liberal media have ignored the case of 65-year-old Harold Preston, a black Houston policeman with 41 years of service who was murdered by an illegal alien -- Elmer Manzano, who had a previous violent criminal record but managed to avoid deportation for decades.

While Fox and Friends covered the story several times, and even interviewed Houston police chief Art Acevedo in a five-minute segment, CNN, MSNBC and CBS ignored the story completely.

The NBC Nightly News and ABC's World News Tonight only recited briefs on Tuesday before news that an illegal alien was involved had broken, while NBC's Today show just barely mentioned the case on Friday.

The Houston police community is mourning the death of one of their own after a horrific attack earlier this week. Forty-one-year-old veteran Sergeant Charles Preston was shot and sadly killed Tuesday while responding to a domestic violence call. Now, ICE says his accused killer in the U.S. illegally. Elmer Manzano, a convicted killer from El Salvador, could face the death penalty as he's charged with capital murder.

After Chief Acevedo recalled that officers had responded to the residence several times over possible domestic violence, with the suspect attacking them this time, Kilmeade followed up by bringing up the issue of having social workers assist police, and then recalled Manzano's criminal record:

And this guy doesn't even belong here. And look at his rap sheet. Unlawful carrying a -- charged with unlawful carrying a firearm in '94. In 2000, two separate assault charges. In 2001, felony assault causing bodily harm to a family member -- 2002, evading arrest with a motor vehicle. How does he stay here in 2020? This was a time bomb ready to blow, and we knew about it 20 years ago.

ABC and NBC never got around to updating their viewers that an illegal alien had been the killer, even though NBC's Today show on Friday briefly mentioned the Houston killing during a story on how police officers in different parts of the country feel about the scrutiny their profession has received in recent months.

Fox's five-minute segment was brought to you in part by Robitussin and Mercedes Benz. You could let them know you appreciate the support of news stories other networks don't want to talk about.

BRIAN KILMEADE: The Houston police community is mourning the death of one of their own after a horrific attack earlier this week. Forty-one-year-old veteran Sergeant Charles Preston was shot and sadly killed Tuesday while responding to a domestic violence call. Now, ICE says his accused killer in the U.S. Illegally. Elmer Manzano, a convicted killer from El Salvador, could face the death penalty as he's charged with capital murder. Houston police chief Art Acevedo joins right now with more. Chief, terrible loss for you and everyone at the department -- can you give us an idea what took place?

ART ACEVEDO, HOUSTON POLICE CHIEF: Well, yes, we had been out to that location to investigate some potential issues with domestic violence a couple times before, but nothing had risen to a level of arrestable offense. And on Tuesday morning, Sergeant Preston was at the scene with a couple of other officers when -- to help the wife and the 14-year-old son and help them get cooperation from the suspect to move out. She had had enough, and sadly at one point the 14-year-old boy opened the door, unlocked it with a key.

And as the door opens, our officers are outside. He says, "Oh my God, he's  got a gun -- he starts shooting -- struck his own son with gunfire -- struck Officer Courtney Waller in the arm with gunfire -- and sadly he struck Sergeant Preston. Sergeant Preston was able to respond and return fire. He fired one round -- actually struck him in the abdomen and suffice it to say obviously we are here because tragically he died. He died a hero. He lived a great life -- he was a great son, a great cop. But above all else, he was a great human being, and we are going to miss him greatly.

KILMEADE: Unbelievable, and it shows the nature of your job -- a domestic dispute, you've been there before. You think you know what you're getting into. But my goodness, you she up, domestic dispute -- that's what people are saying that law enforcement has to do now is show up to domestic disputes with a therapist and psychologists. House would that have gone?

ACEVEDO: You know, we do -- we use a multi-disciplinary response with our cert teams -- our crisis intervention response teams that actually has healthcare professionals with us. But when it comes to domestic violence -- when we think there may be someone that's armed or there is someone that is armed, we don't put them in harm's way. Domestic violence calls are some of the most dangerous. We lost Sergeant Christopher Brewster about two years ago on December 7th, and he was gunned down by a man that's a coward. Let's face it -- men that abuse their wives -- abuse their children are cowards, and cowards are dangerous because they have no respect for the sanctity of life let alone their own family.

KILMEADE: And this guy doesn't even belong here. And look at his rap sheet. Unlawful carrying a -- charged with unlawful carrying a firearm in '94. In 2000, two separate assault charges. In 2001, felony assault causing bodily harm to a family member -- 2002, evading arrest with a motor vehicle. How does he stay here in 2020? This was a time bomb ready to blow, and we knew about it 20 years ago.

ACEVEDO: You know, one of the things that we talk about as police chiefs with our partners at DHS is that both the law enforcement and our federal officers have very limited resources, and so we have always encouraged our partners and worked with our partners -- especially HSI, Homeland Security Investigations -- to try to focus our limited resources on people that are violent and on undocumented immigrants that are violent because, at the end of the day, our number one priority has to be the sanctity of life which means the protection of the American people from violence and including other undocumented immigrants that -- those that are just here to work.

Sadly, disproportionately, they are impacted the most by undocumented immigrants because that's who they victimize knowing that they would be afraid to come forward. And that was the case here because the victim -- she was undocumented, and he kept threatening her that he was going to make sure she got deported if she came forward, and, fortunately, she finally did come forward, and no one else was killed other than sergeant Preston who did his job to the very end.

DAVID MUIR: We're learning more tonight after a deadly police shooting in Houston. Authorities say Sergeant Harold Preston was shot and killed, responding to a call at an apartment complex. Another officer shot in the arm. Officers on the radio could be heard calling for help.

MUIR: Sergeant Preston was a 41-year veteran of the department and a father. The police chief tonight saying Preston was able to see his mother at the hospital before he died. The suspect is in custody.

LESTER HOLT: In Houston a veteran police officer was shot and killed today as he responded to a report of a domestic dispute. Police say the suspect shot sergeant Harold Preston several times in front of his apartment. Another officer was wounded and is in stable condition. The officers returned fire, wounding the suspect, who was under arrest. Sergeant Preston was 65 years old -- he'd been on the force for 41 years.