Monday morning's newscasts made a stark illustration of how much importance FNC places in the issue of human rights in Iran in contrast with the broadcast networks and CNN as Fox and Friends managed to spend five times as much time on the anti-government protests as ABC, CBS, NBC, and CNN all combined that morning.

CNN's New Day -- which was mostly pre-recorded due to the holiday but included live portions -- gave viewers three briefs which only totaled one and a half minutes, and barely scratched the surface of the weekend's events that turned deadly for about a dozen protesters.

The reports neglected to implicate government forces in the killings, and even included a reference to President Hassan Rouhani lecturing protesters about not being violent, as if the protesters provoked their own deaths. CNN Newsroom had notably spent more time on the demonstrations over the weekend, but not much of it was included in the Monday edition of CNN's flagship morning show.

ABC's Good Morning America similarly ran two briefs totaling 39 seconds which similarly referred to the Iranian president warning protesters not to be violent, and also suggested that demonstrators had provoked the violence when they "tried to take over police stations and military bases."

CBS -- which had given the least attention to the protests on its morning and evening newscasts over the weekend -- didn't get much better on Monday's CBS This Morning. In fact, as they included the Iran story in the show's opening tease, CBS borrowed a clip of CNN weekend anchor Ana Cabrera recalling the events, possibly because CBS had done so little on the story themselves.

But Monday's show still spent only about 30 seconds on the demonstrations -- 40 if you count the opening tease -- as correspondent Chip Reid mentioned the developments in a story about President Donald Trump's reaction to North Korea, and later when Tony Dokoupil read a brief ran shortly after 8:00 a.m. ET.

NBC's Today show on Monday did not mention the Iran protests at all, and none of the briefs from CNN, ABC, or CBS on Monday morning gave any indication that Iranian government forces have a history of cracking down violently on protesters.

By contrast, Fox and Friends devoted four segments to Iran on Monday, totaling about 14 and a half minutes. Liberal attorney Alan Dershowitz, conservative activist John Bolton, and conservative commentator Michelle Malkin all appeared as guests and discussed Iran.

Dershowitz notably praised President Donald Trump's handling of Iran in contrast with President Barack Obama, and suggested Trump deserves credit for inspiring protests against the Iranian government. Malkin complained that the media have blamed the protests on economic issues like unemployment rather than the authoritarian nature of the government.

Below are transcripts of relevant portions of CNN's New Day, CBS This Morning, and ABC's Good Morning America:

BORIS SANCHEZ: Iran's president addressed the country last night amid days of anti-government demonstrations. Hassan Rouhani acknowledged the hardship that some Iranians face, and said that people are afraid to protest. But he then warned against violence and vandalism. State-run media reports that two protesters were killed last night, and that officials have temporarily restricted access to social media apps that have been used to spread word of the protests.

SANCHEZ: Meantime, in Iran, 10 people have now died in the anti-government protests. The country's minister of communication and technology says that Iran is not restricting social media sites which have helped to fuel these protests, though state media have reported that access was being limited. President Hassan Rouhani addressed the country last night. He said that people are free to protest, but he warned against violence and vandalism.

SANCHEZ: We start with an update on the situation in Iran -- 12 people have died during four days of anti-government protests there, according to state media. President Trump tweeting less than an hour ago that "it is time for a change in Iran," and called that country a "failing state," and saying people are "hungry for freedom." Officials are denying that the government is permanently filtering social media sites. State media reported earlier that the apps Instagram and Telegram are being temporarily restricted.

From CBS This Morning:

SENATOR LINDSEY GRAHAM APPEARING ON CBS'S FACE THE NATION: You just can't tweet here. You have to lay out a plan.

CHIP REID: When asked about Kim Jong-UN's claim, he (President Donald Trump) would only say, "We'll see," but he did weigh in on another international story. The protests in Iran have entered their fifth day. The police are clashing with demonstrators who are voicing their frustrations with their government. President Trump tweeted, "The USA is watching very closely for human rights violations." 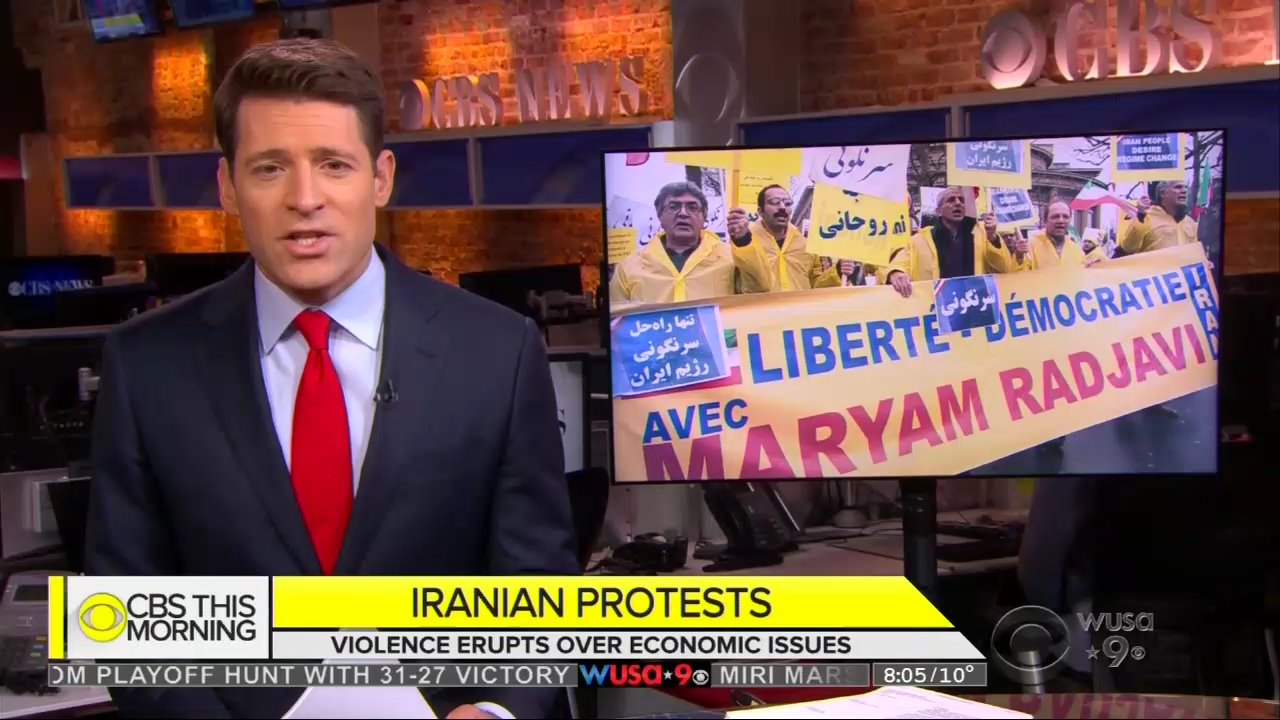 RON CLAIBORNE: And we're following breaking news from Iran where 12 people have been killed in the anti-government protests. Security forces fought armed demonstrators who tried to take over police stations and military bases. The protests over the government's handling of the economy started Thursday and quickly spread across the country. Several others have been wounded, and hundreds have been arrested.

CLAIBORNE: And breaking news in Iran where at least 12 people have died in violent protests there. Police are rallying in -- people are rallying against rising prices, high unemployment and corruption. The White House has voiced support for the demonstrators, Iranian President Hassan Rouhani says they have a right to protest, but warned against violence.