On Thursday, CNN's New Day began the show by immediately hitting the incoming Donald Trump transition from the left, seeing "more hardliners" and a "climate change denier" being appointed to the administration, and fretting over its "militarization" because of the selection of "another general." The news network also forwarded fearmongering from an unnamed former Barack Obama aide who charged that Trump's selection for EPA administrator, Scott Pruitt, would be "an existential threat to the planet." 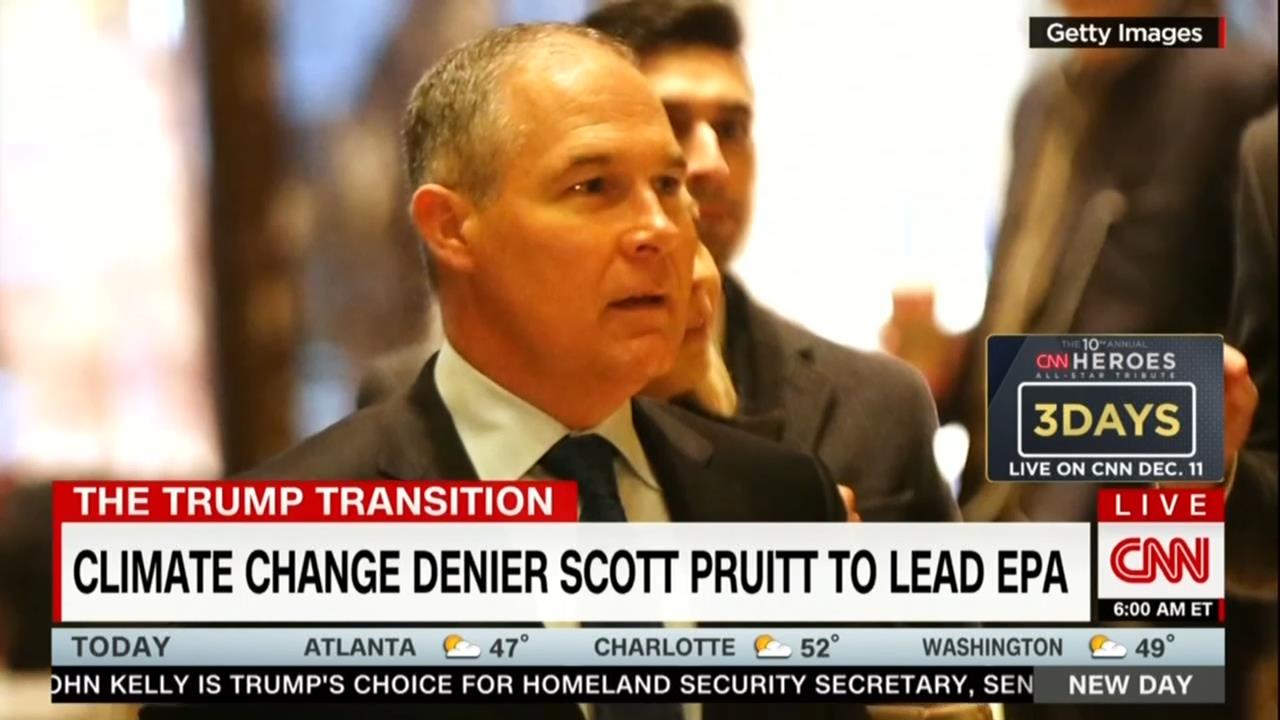 She then added: "A signal the Trump administration is intent on reversing President Obama's moves to curb climate change. Trump also tapping another general to his cabinet, retired General John Kelly, to head the Department of Homeland Security, raising questions about the militarization of his administration."

After her report concluded, co-host Chris Cuomo set up the next report by intoning: "Democrats and environmentalists are sounding the alarm about Trump's pick to head the EPA. They're vowing to mount a fierce fight against Oklahoma Attorney General Scott Pruitt. CNN's senior Washington correspondent, Joe Johns, live with more. What's the state of play?"

Well, Chris, the selection of Scott Pruitt at EPA is in line with Donald Trump's policy pronouncements on the campaign trail, but quickly created a storm of outrage on the left. One former top aide to the Obama administration calling Pruitt, quote, "an existential threat to the planet."

After a soundbite of Trump spokesman David Miller praising Pruitt's conservative credentials, Johns added: "An ally of the fossil fuel industry, the Oklahoma attorney general is a fierce critic of the agency he may soon lead, filing lawsuits against the EPA over its regulations of power plants, including Obama's effort to significantly reduce their emissions."

Just as the dominant news media that pretends not to have a liberal bias have adopted the preferred liberal jargon in using terms like "dreamers," "undocumented immigrants," "pro-choice," and "anti-abortion," it appears that at CNN, "climate change denier" -- a term originated as an anti-conservative pejorative coined by the environmental left -- is now just a normal part of its lexicon.