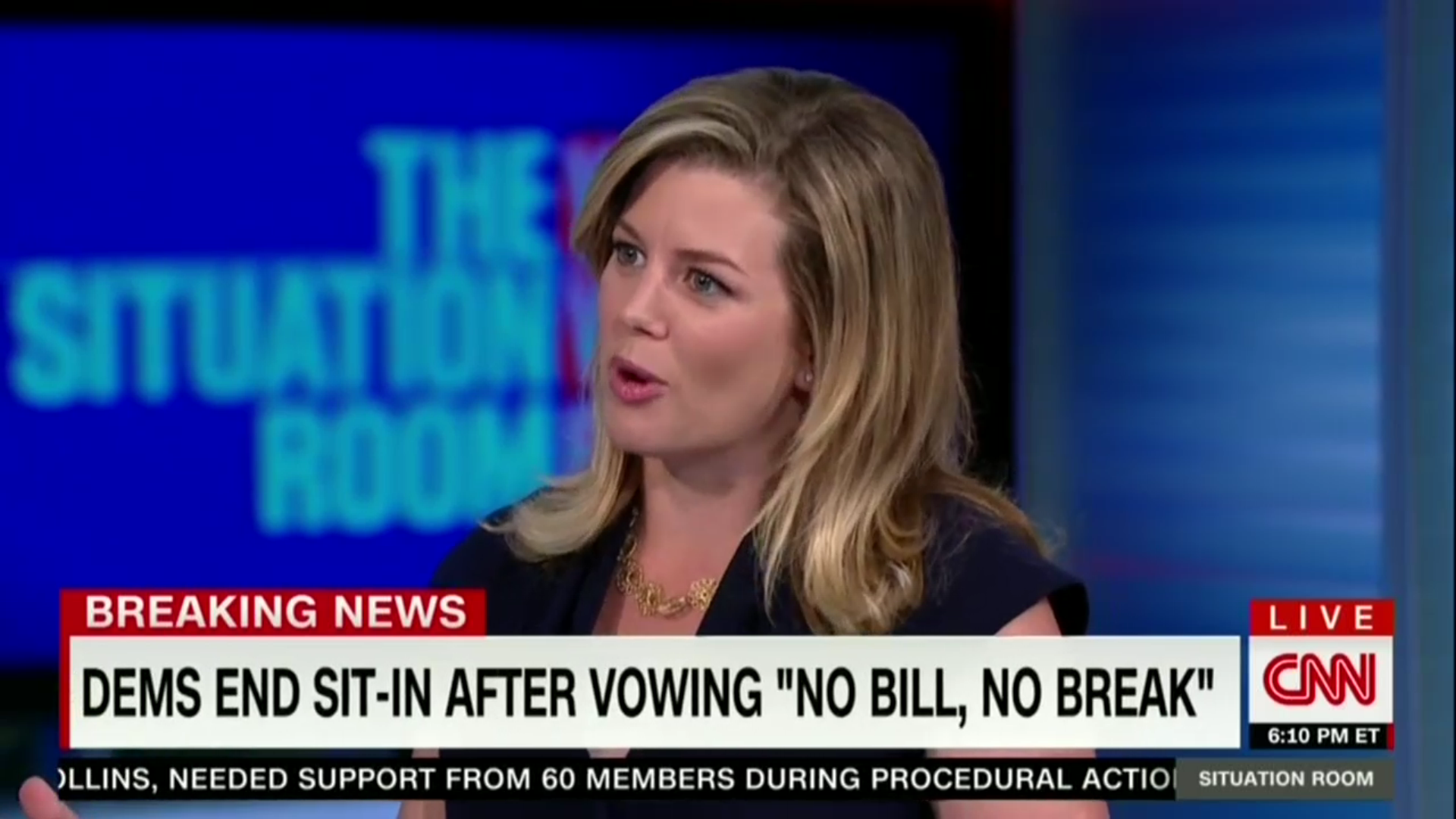 Given the dominant media fervor in favor of more gun control, plus the favorable coverage the House Democratic sit-in stunt has received, it would certainly not be a shock to find a CNN anchor asking a question or two to a Democratic congressman pressing that the protest should have lasted longer or that they should go back to protesting again later.

But when CNN's Brianna Keilar repeatedly pressed a Democratic congressman -- posing 10 questions in just six minutes along the lines that the protest did not last long enough, or that it should be resumed in the near future -- this was at the MSNBC level of liberal advocacy and bordering on a liberal media bias caricature.

As California Democratic Rep. Adam Schiff appeared as a guest on Thursday's The Situation Room, substitute anchor Brianna Keilar wondered why Democrats decided to end the sit-in so soon as she posed her first question:

And joining me now to talk about this, one of the House Democrats who took part in the sit-in over guns. That's Congressman Adam Schiff of California. And -- you actually said you started about an hour in. This began spontaneously, and you were there for about 18 hours. But why did you all decide to end it?

Not satisfied with his response, Keilar then fretted that Democrats were sending a "bad message" by promising not to take a break until Republicans caved in, but then taking a break anyway:

But I was watching the response publicly, and it seemed that certainly people in your corner, they were starting to take notice of what happened, and, as they started to get behind you, they were even using the hashtag "NoBillNoBreak." But it seems like there was a break, and it seems like it had been said by -- I think Nancy Pelosi -- this is going to keep going on until "hell freezes over."  But it seems like it was "hell freezes over or vacation starts." Doesn't that send a bad message about the dedication of the issue?

The two then went back and forth for a bit:

BRIANNA KEILAR: But the optics of saying, "We're determined to take this up after our vacation"?

REP. ADAM SCHIFF (D-CA): Well, that was a decision that the majority made essentially to recess without-

KEILAR: Should it have been different, do you think? Is that what you're saying?

SCHIFF: I absolutely think that the majority-

KEILAR: Should you have kept going?

SCHIFF: -the majority should have stayed in session. Whether it would be productive for House Democrats-

By this point, the Democratic congressman might be forgiven for feeling like he had wandered onto the set of an overzealous "progressive" MSNBC anchor by mistake, but Keilar was just getting started as she then pressed him on whether Democrats should have sacrificed their vacations so they could do more protesting:

KEILAR: But I mean Democrats decided -- they could have -- there's nothing stopping Democrats from staying on the House floor. This was being broadcast on social media, even though the official cameras had been turned off. Why not stay? Why not say, "We're going to stay through our vacation because this is our commitment"?

SCHIFF: You know, that was a debate that we had and a discussion that we had with our leadership. We made the decision it would be more effective frankly to resume this when we all return when frankly there's much more pressure on the GOP to act because there are measures they want to take up. They don't want to answer the questions we've been raising. And we thought we'd be more effective when they return to session.

KEILAR: There are a lot of complaints that people have about Congress where they feel that Congress isn't in session enough and that members of Congress are very dedicated to taking their time off instead of being in Washington. Doesn't it play into that perception?

The grilling from the left continued until the CNN host ended up pining for Democrats to do another protest in the near future after they return to the Capitol:

KEILAR: If you sort of throw up your hands, though, and say, "The majority isn't going to allow us to be on the floor in regular order, so we're going to take over," and then you leave, and I hear you saying you do work at home, and certainly understand that being home and talking to your constituents is very important, but when it comes to this issue on guns, are you better off being at home as individuals? Or are you better off being in Washington doing something that's getting a lot of attention, maybe where you could actually bring awareness to the issue than dispersing and then it goes away?

KEILAR: What does it look like when you come back? Will we see this again?

SCHIFF: We will see this again, and I don't-

KEILAR: There will be another sit-in, you think?