The first sign of amusement occurred while Baldwin was reading a recent quote from Boehner at Stanford University in which he called Senator Cruz "Lucifer in the flesh" and a "miserable son of a b****," as what sounds like a giggle -- presumably from Bash -- can be briefly heard in the background.

Then, after a clip of Trump using the anti-Cruz attack by Boehner to repeat his "lyin' Ted" slam against the Texas Senator, both Baldwin and Bash seemed amused as they began discussing the name-calling, and a bit later both giggled as Bash recalled that Boehner has been known to say worse things about Cruz, calling the more recent comments "a little bit tame." Bash:

You know, it was not a secret how he felt about Cruz. Now he's just using more colorful language. Actually, "Lucifer" is maybe a little bit tame compared to some of the other colorful language that we've heard that he has said about Ted Cruz in private.

Notably, Bash has in the past shown a willingness to laugh at crass name-calling aimed at Republicans. Back in 2010, as she and fellow CNNer John King appeared on Kathy Griffin's show on the Bravo network, Bash laughed when Griffin called then-Republican Senator Scott Brown's teenage daughters "prostitutes."

Below is a transcript of the relevant portion of the Thursday, April 28, CNN Newsroom with Brooke Baldwin:

BROOKE BALDWIN: Signs that the Republican establishment's cold shoulder to Donald Trump might be beginning to thaw. Former Republican House Speaker John Boehner reportedly told a crowd at Stanford University that he would vote for Trump if he were the eventual Republican nominee. But, as Boehner is apparently warming up to Trump, he is hurling fire at another man who wants the job -- Senator Ted Cruz. Boehner said he would not support Cruz as the nominee.

And he went on from there, he was asked what he thought about the Senator from Texas, and it's the Stanford Daily that is reporting that Boehner, quote, "made a face" when he was asked that, and then this is the quote seen everywhere: "Lucifer in the flesh." "I have Democrat friends and Republican friends. I get along with almost everyone, but I have never worked with a more miserable son of a bleep in my life."

BALDWIN: So that was John Boehner. Here is Donald Trump after hearing those words.

DONALD TRUMP CLIP #1: If Cruz sneezes, if he just sneezes, his people leave him. Believe me. There's no loyalty. Who can listen to him? 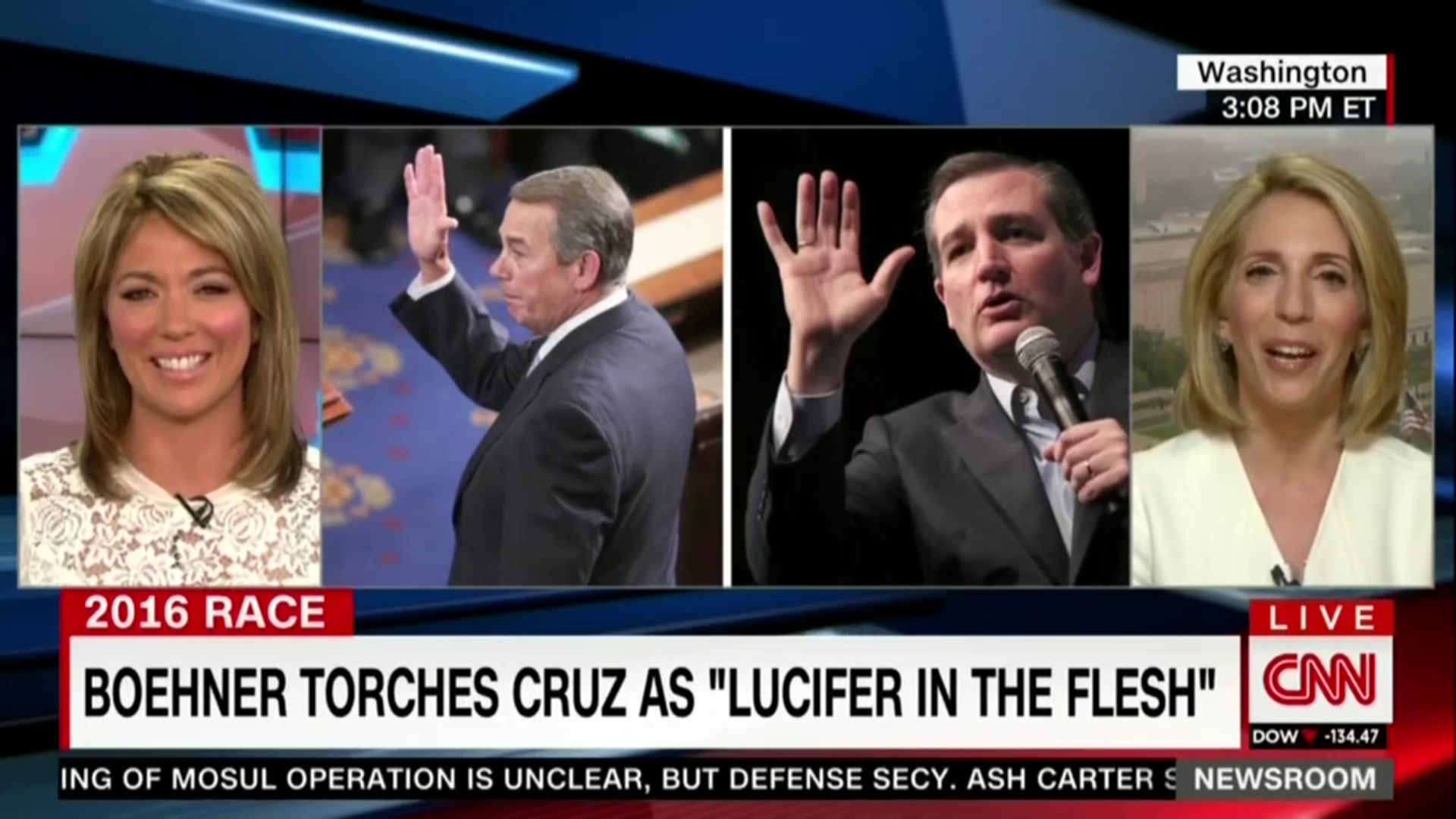 BALDWIN: Boom, apostrophe, but we get where he's going. Dana Bash is with us now, CNN's chief political correspondent. First of all, where has John Boehner been? And now, boy oh boy, he has made a splash with his public appearance.

DANA BASH: He has, although it seems reading some of the transcript, he didn't necessarily expect it to be public. Look,  he's gone, he's in retirement, he's making speeches, writing a book, and he is now saying the things a little bit more freely that those of us who covered him, especially during his very tumultuous years, he believes, and he's not wrong, in large part, many times because of Ted Cruz's tactics.

You know, it was not a secret how he felt about Cruz. Now he's just using more colorful language. Actually, "Lucifer" is maybe a little bit tame compared to some of the other colorful language that we've heard that he has said about Ted Cruz in private.