Bernstein Likens Sanders to Bobby Kennedy, Clinton Might Be in 'Terrible, Terrible Trouble'

Appearing as a guest on Friday's CNN Newsroom with Brooke Baldwin, CNN political commentator Carl Bernstein gushed over Bernie Sanders, comparing his political movement to that of 1968 Democratic presidential candidate Bobby Kennedy, as he theorized that Hillary Clinton "could be a very capable President," but lamented that she is a "terribly flawed candidate" with "ethical baggage."

The CNN commentator went on to assert that Clinton is in "terrible, terrible trouble" if she is unable to produce transcripts of her meetings and highly paid speeches with business groups that have been attracting criticism. 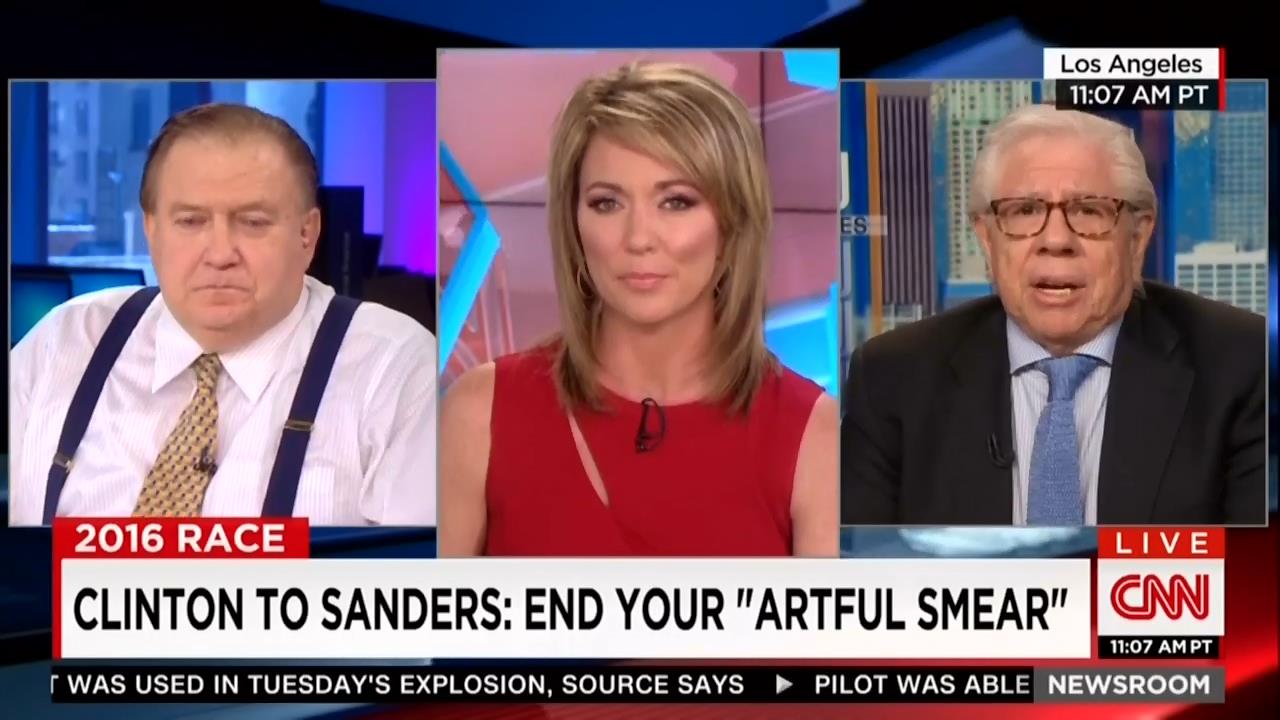 What we are seeing is that Hillary Clinton could be a very capable President, but she is a terribly flawed candidate who has ethical baggage that is costing her terrifically, the GOP is exploiting it, and in Bernie Sanders we have a candidate who has begun a real movement the likes of which we haven't seen -- and I'd like to know what Bob (Beckel) thinks about this -- since Bobby Kennedy.

That there is a potential -- I never would have believed this a few weeks ago -- for him to go on and win the nomination, and he has hit on the issues that go to her weaknesses which have to do with character issues and trust.

Moments later, host Brooke Baldwin brought up how the Democratic presidential candidates might respond to the water pollution problem in Flint, Michigan. Baldwin:

Carl, let me bring you in. I want to switch gears and talk Flint, Michigan. We know they'll be debating -- this is one of the additional debates coming up in Flint in March. We know that we've learned that Hillary Clinton will be going to Flint Sunday. She is the one who actually connected or was part of connecting the mayor in Flint to President Obama. We know they sat down at the White House some weeks ago. This has been one of her issues. What will she be able to do in Flint that she can use to her advantage come Tuesday?

Bernstein began by expressing his hope that Clinton and Sanders would not attack each other on the issue of Flint's problems:

I would hope this rises above this political race, that both she and Sanders have said the right thing. Sanders has said that this governor should leave office. He ought to be recalled. This is a terrible thing that's happened and shouldn't be exploited in a presidential campaign. They're both on the same wavelength -- Sanders and Hillary -- on this.

He then pivoted to Clinton's paid speeches which he saw as a big problem:

And let's talk about the real questions. And the real question that's been raised, as Chuck Todd did last night, is this question of the transcripts of Hillary Clinton's meetings and speeches before these groups. It's not going to go away. She's going to need to produce them, or she is in terrible, terrible trouble if she can't.