On Sunday's Fareed Zakaria GPS on CNN, host Zakaria suggested that it would be a "mistake" for the West to make a "swift and violent response" to the Paris terrorist attacks because doing so "further stokes the fires of jihad."

At about 10:33 a.m.EST, before a commercial break, he plugged the next segment:

Coming up, it's an all too familiar pattern. A well-planned attack on the West, followed by a swift and violent response that further stokes the fires of jihad. Will the West make these mistakes again? That's next on GPS.

The next segment, which featured Maajid Nawaz of the anti-extremism group Quilliam as a guest notably was not devoted to the possibility of additional military actions, but instead focused on how to discourage Muslims -- many who were born in the West as the children of immigrants -- can be discouraged from becoming Muslim radicals.

Nawaz began by being critical of both the "apologies among the far left" who are "pretending that there's absolutely no problem with Europe's Muslims," and the "far right" whom he accused of "sensationalism."

Below is a transcript of the beginning of the segment from the Sunday, November 15, Fareed Zakaria GPS on CNN:

FAREED ZAKARIA: David Frum said in the last segment that the greatest danger of terrorism comes not so much from the refugees or foreigners in general, but second-generation migrants. Sometimes it's European, sometimes even with American passports who have been radicalized. How to counter this, how to reverse it? 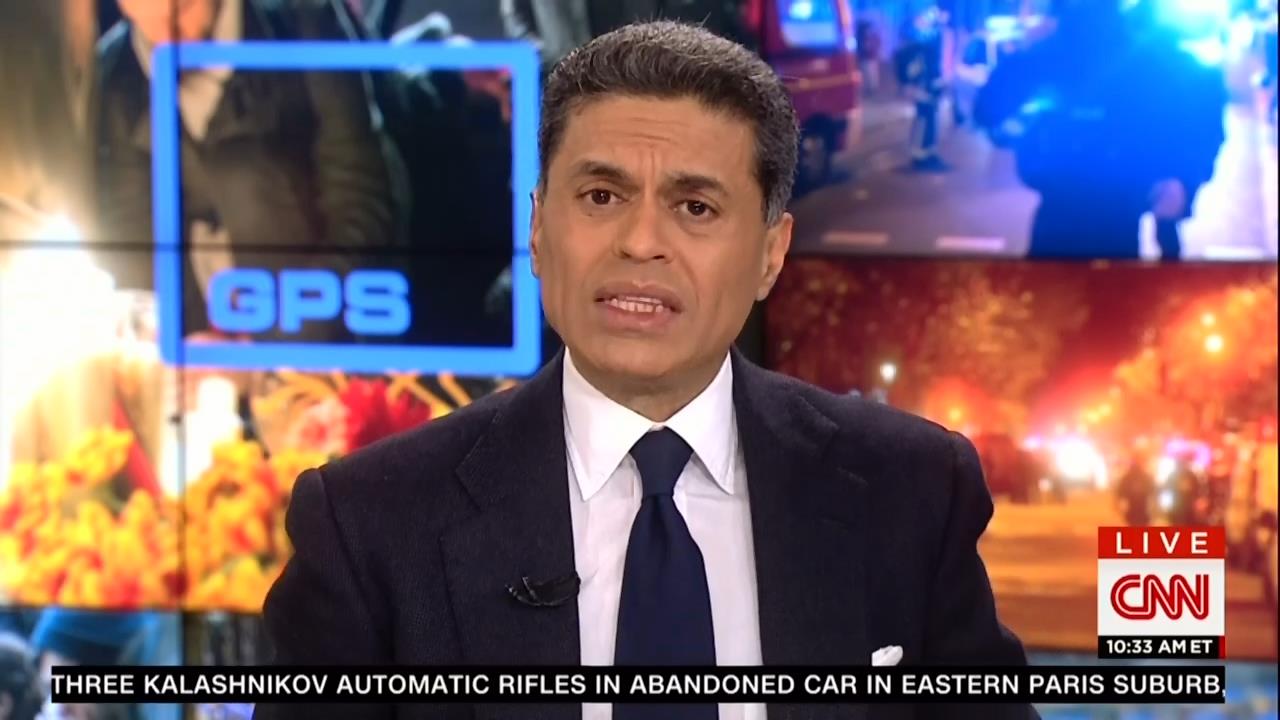 Maajid Nawaz was himself a radical jihadi, now is the founder of the counter-extremism group Quilliam. Nawaz works to promote tolerance and democracy among Muslim youth.

Maajid, when you hear about these people in Paris -- and let us assume that some of them and we don't know how many -- are in fact locals, paint us a picture of the kind of person who would do this. It's just so, so unthinkable, not just being willing to kill, but being willing to die.

MAAJID NAWAZ, QUILLIAM: Yes, Fareed. I want to begin by saying that, look, I've been dealing with this every single day of my life. This struggle, this cause has consumed me since founding Quilliam eight years ago. So I just want to make it very clear that between the apologies among the far left in this debate, you know, pretending that there's absolutely no problem with Europe's Muslims, and between the sensationalism of the far right, the most important thing as you've correctly stated right now is for us to remain level-headed.

The vast majority of those who have gone to join ISIS from the West -- Western-born and raised Muslims -- are Western citizens. So, yes, there is genuine discussions around refugees. We need to have genuine conversations about some of the challenges that refugees pose, but, look, let's be honest and real about this. Germany has taken in hundreds of thousands of refugees. France has hardly taken in any. Yet, I bet you that many of these attackers in France were French-born and raised citizens. So let's remain level-headed and avoid being, I'd say, blinded by our left eye or popping a blood vessel in our right eye because both of those conclusions would render us blind.