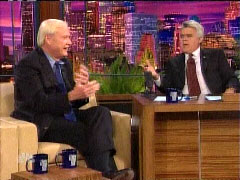 As Chris Matthews appeared as a guest on Friday's Tonight Show on NBC, while the MSNBC host did have a few positive things to say about John McCain and Sarah Palin, he also conveyed his feeling that he is "worried" that Hillary Clinton will not help Barack Obama win swing states like Pennsylvania and Ohio, because their "relationship" has not been sufficiently mended. Matthews: "I really worry about that relationship, if it's solid enough, because I really do believe in states like Pennsylvania and Ohio, where Hillary did really well, Hillary could go in there and campaign with this fellow, Barack Obama, like gangbusters." He also erroneously conveyed the impression to viewers that the Bush administration is responsible for 80 percent of a $10 trillion national debt as he misquoted the federal budget deficit, claiming that "we've added a trillion dollars in debt every year." In fact, the deficit for FY 2007 was about $500 billion, higher than most of the other Bush years.

And, while Matthews is not known for acknowledging that Obama is liberal, he also characterized Sarah Palin as extreme as he listed off her opposition to abortion and gun control, and her doubts about climate change, tagging her as "very conservative" and as "pretty far over." After several audience members applauded Palin, as if he were surprised that some people actually approve of these conservative views, he glanced at the audience with a smile and added, "Some people like this stuff." Matthews even tagged McCain "more conservative" but did not label Obama as "liberal." Matthews: "We got an older guy, we got a more conservative guy, we got a younger guy, a Democrat. I think these are great candidates."

Below is a transcript of relevant portions of the Friday, September 5, Tonight Show in NBC:

JAY LENO: Are you surprised by Governor Palin's popularity? She's like a rock, the latest poll today, there's a Rasmussen poll, I think?

LENO: Well, she, more popular than McCain or Barack Obama.

MATTHEWS: Yeah, yeah, well, the new kid on the block. I'm telling you-

LENO: Is it because we don't know anything about her?

MATTHEWS: This will show how old we're getting, I'm getting. Jack Kennedy was younger than her when he ran for President. He was 43, she's 44. But people love youth in this country. We love the fact that somone can come out with this crackerjack personality, she's gung ho, she's fearless, she goes out there before the people, she gave this great speech. You know, she's a conservative, and people have to decide what they think of her policies, but first impression is dynamite.
...

MATTHEWS: But she's very conservative. She thinks there should be no abortion ever. She's basically no gun control. She doesn't believe in evolution. She doesn't believe in climate change -- really. She's pretty far over. So, I mean, I think people are going to have to decide. [A FEW AUDIENCE MEMBERS APPLAUD AND YELL] She's certainly un-Hillary. 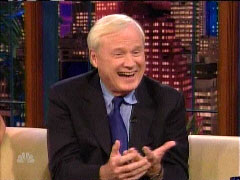 MATTHEWS GLANCES AT THE AUDIENCE MEMBERS WHO WERE APPLAUDING AND SMILES: Some people like this stuff, ha! But, I mean, if you're a Hillary voter, this is not your answer. This is the opposite of Hillary.

JAY LENO: Well, you know something? I mean, I find, something I find interesting, you know, and I guess maybe sexism plays a role in this, that people say, oh, she'll get the Hillary voters, as if women would vote for another candidate only because they're the same gender. I mean, Hillary and this woman could not be further apart in their political views.

MATTHEWS: They might, if you think about it subtly, a lot of women who are angry because women didn't get the nomination, or they believe that she was treated unfairly, might say, "I'm going to give the Republican party a second look because they've given a woman a shot." You know what I mean? But they're not going to like the candidate, perhaps, once they listen to all the points of view. I think the country is going to decide, is to say, look, today unemployment rate shot to 6.1 percent, the highest in five years. The federal debt now is $10 trillion. We've added a trillion dollars in debt every year.

We can't buy all this stuff in the world like we used to. It's not just oil and gas. We're competing for everything with rich countries now. Guess what. We won the Cold War, all these countries that were going socialist are now capitalists. And guess what. They're competitors now. So we got to compete with China, Russia, India, Brazil, for the same materials we want. If we want oil, we got to meet the Chinese price. So, all of a sudden, we're realizing we live in a whole new world. I just think the question you got to ask if you go into that voting booth: Who's got the future in mind? Who can look down the road, five, ten years, and think about what we're going to do on oil, what we're going to do on energy, what we're going to do on climate change, and how are we going to keep people working. I'm telling you, this unemployment rate scoots up another point by election day, because you know how it works in America, when the guy down the street loses his job it's a recession, when you lose your job it's a depression. And I think people are starting to get nervous, and every time that number goes up, higher people get more nervous.

LENO: What about Hillary? Is she the secret weapon now? Does Barack bring her out to counteract, will she campaign for him?

MATTHEWS: Boy, they better cut the deal, don't you think? I mean, whatever she owes, he ought to pay.

LENO: You think she'll come out, like, November 8th?

MATTHEWS: No, I really worry about that relationship, if it's solid enough, because I really do believe in states like Pennsylvania and Ohio, where Hillary did really well, Hillary could go in there and campaign with this fellow, Barack Obama, like gangbusters. She could say, "Yeah, I wanted to be President, but he'll be better than the other guy," and go door-to-door with regular people. She's pretty good. In a lot of ways -- in the campaign in Pennsylvania, for example -- she came off as the girl next door. She was really powerful. So, if she could sell him, he'll win. But I'm not sure it's together yet. Maybe it's about what you're asking about, did she pay off his debt, or did he pay off her debts yet, but I think it's time for a deal.
...

MATTHEWS: Anybody my age, when you hear that story about Vietnam, and you hear about being in solitary for two years, you hear about guys tapping on walls to tal to each other in this code they figured out, and the way they stuck together, and how they were American to the last, even when he said I was broken. Well, you know, he wasn't broken that much because he went right back and started standing up to these guys. You got to root for the guy. I think we got a good choice this time. We got an older guy, we got a more conservative guy, we got a younger guy, a Democrat, I think these are great candidates."