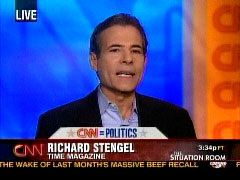 On Thursday's The Situation Room on CNN, Time magazine's managing editor, Richard Stengel, suggested that the 1961 Bay of Pigs attempt to overthrow Cuban dictator Fidel Castro should not have been planned, as he assigned some of the blame for the fiasco to President Eisenhower for planning it in the first place. During a discussion of the importance of experience for a new President, Stengel contended: "John Kennedy, when he was first elected, very inexperienced President, got us into the Bay of Pigs. Terrible mistake. But who planned the Bay of Pigs? Dwight Eisenhower." (Transcript follows)

Stengel cited a recent Time cover story which mentioned that Kennedy "stumbled" early in his presidency, which "resulted in the disastrous Bay of Pigs," but neither he, nor the story, mentioned that Kennedy's refusal to follow through with Eisenhower's plan to provide air support to Cuban exiles was likely the deciding factor in making the endeavor a failure. The article in question read:

Once upon a time, the torch was passed to a new generation of Americans, and a charismatic young President, gifted as a speechmaker but little tested as an executive, was finding his way through his first 100 days. On Day 85, he stumbled, and the result for John F. Kennedy was the disastrous Bay of Pigs.

For scholars of the presidency, Kennedy's failure to scuttle or fix the ill-conceived invasion of Cuba is a classic case of the insufficiency of charisma alone.

The article did not mention that Castro had only just seized power in 1959 and aligned himself with the Soviet Union relatively soon afterwards, and that by 1962 the Soviet Union was already placing nuclear missiles on the island country capable if hitting Washington, D.C. Thus, one could argue that it would have been wise to overthrow the communist regime somewhat quickly in 1961. But instead, the article chided Eisenhower for the timing of his plan to overthrow Castro:

For that matter, Kennedy would not have faced such a harsh early tutorial if the venerable warrior and statesman Dwight D. Eisenhower had not allowed the Cuba-invasion plan to be put in motion during the last of his eight years as President.

Below is a transcript of the relevant portion of Stengel's comments from the Thursday March 6 The Situation Room on CNN:

RICHARD STENGEL: Well, you know, Wolf, we did a cover story last week about how much experience does a President need, and we cited the fact that John Kennedy, when he was first elected, very inexperienced President, got us into the Bay of Pigs. Terrible mistake. But who planned the Bay of Pigs? Dwight Eisenhower. I agree with Gloria. It's not so much experience. It's temperament. It's your judgment. It's all of those things that experience contributes to.