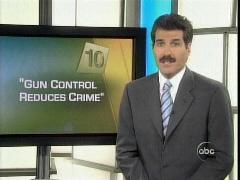 On Friday's 20/20, ABC anchor John Stossel discussed the self-defensive benefits of gun ownership, debunking the myth that 'gun control reduces crime,' during 20/20's recurring series 'Myths, Lies & Downright Stupidity,' based on Stossel's book of the same title. Citing the recent Federal Appeals Court for D.C. ruling overturning Washington, D.C.'s ban on gun ownership, Stossel talked to the pro-gun plaintiff in the case, Tom Palmer, and pointed out that the murder rate in D.C. increased after the city's gun ban. Stossel: "Since Washington's gun law passed, the murder rate actually increased, even while America's murder rate dropped. It's because guns can also save lives, says Palmer, as one saved his years ago in California." (Transcript follows)

The ABC anchor cited the case of Kennesaw, Georgia's law that requires its citizens to own guns, relaying a local police officer's observations that crime had dropped after the law passed. Lieutenant Craig Graydon, Kennesaw Police Department: "Well, after the city ordinance passed, there was actually a decrease in reported crime in the Kennesaw area, especially violent crime." Stossel described two instances in which guns were used by law-abiding citizens to stop criminals, including students at the Appalachian School of Law who went to their cars and retrieved their guns after a gunman attacked their school in January 2002.

After relaying that the National Academy of Sciences "could not document a single gun regulation that reduced violent crime or murder," he concluded the story with a soundbite from pro-gun advocate Tom Palmer: "If someone gets into your house, which would you rather have, a handgun or a telephone? You can call the police if you want, and they'll get there, and they'll take a picture of your dead body. But they can't get there in time to save your life. The first line of defense is you."

Below is a complete transcript of the segment on gun control from the Friday May 4 edition of 20/20 on ABC:

Elizabeth Vargas: "Now, it's time for our popular series 'Myths, Lies & Downright Stupidity,' which is also the title of John's best-selling book. It challenges conventional wisdom like 'stress causes gray hair.' Does it? And 'never eat out on Mondays.' Is that right?"

John Stossel: "Well, you'll find out now as we begin our top ten list, starting with number 10: 'Gun control reduces crime.' The horror of the shootings at Virginia Tech had many people talking about gun control."

John Roberts, CNN: "It's about the weapons, the guns. Where did the killer get them?"

Elizabeth Cohen, CNN: "They're shocked at how easy it is to purchase a gun."

Rep. Jim Moran (D-VA): "It is simply too easy to obtain a firearm."

Stossel: "The belief that gun control prevents gun crime is why many were upset this spring when-"

Tom Palmer, Washington, D.C. resident: "I don't know how anyone could be serious in saying that because the gun violence went up when they banned handguns."

Stossel: "Tom Palmer is one of the plaintiffs who sued D.C. over the right to have a gun. He's correct about gun violence going up. Since Washington's gun law passed, the murder rate actually increased, even while America's murder rate dropped. It's because guns can also save lives, says Palmer, as one saved his years ago in California."

Palmer: "We were walking on the street, and this group of young men took really strong exception to that. They stood up, 19 or 20 young guys, followed us, and they told us, 'We're gonna kill you. They'll never find the bodies.' And I turned around and showed them the business end of a pistol."

Stossel: "Just pulling out the gun was enough to stop them."

Palmer: "Yeah. It works. Merely having a weapon and being able to display it when I was threatened saved my life."

Stossel: "Now, you may think that carrying a gun, as Palmer did, is illegal in most of America, but it's not. Many people don't realize that today, in America, in about 40 states, it is legal to carry a concealed weapon on your person. And in those 40 states, there is no more violent crime or murder than in states where guns are restricted. The town of Kennesaw, Georgia, went a step further and passed a law requiring every household to have a gun. Did they then experience a crime wave? No."

Stossel: "Now, I don't want politicians ordering me to have a gun. And the law isn't enforced here. But townspeople we talked to liked the law."

Unidentified man #1: "This is a very peaceful place to be."

Unidentified man #2: "We should have guns. I mean, that's what free society do."

Stossel: "These maximum security felons said they fear an armed victim much more than the police."

Unidentified male prisoner: "When you go to rob somebody you don't know, it makes it harder."

Stossel: "And they said gun laws don't matter to them. They don't obey them."

Male prisoner: "I'm not worrying about the government saying that I can't carry a gun. I'm gonna carry a gun anyway."

Stossel: "It's impossible to know exactly how often guns stop criminals because who reports a crime that doesn't happen? But people use guns in self-defense every day. Often, just showing a gun is enough to prevent the crime. When robbers broke into Joyce and Raymond Papin's home and attacked Raymond, he yelled."

Stossel: "Joyce did. And when the robbers saw it, they ran away."

Papin: "Boy, when he saw the gun, he just started running, and they weren't just walking fast. They were running. They had boots on. You could hear them boots a'clopping."

Stossel: "Joyce says having a gun changes the balance of power. And here's a controversial idea: Some Virginia Tech students say they wish students had been allowed to carry guns because one of them might have stopped the killer before he shot so many people. And that's what happened five years ago at the Appalachian School of Law. Hearing shots, two students went to their cars, got their guns, and helped restrain this shooter until police arrested him."

Palmer: "One of the things that the gun does is it equalizes unequals. My mom told me when I was a young boy because she was armed she was never afraid."

Stossel: "So gun control isn't necessarily crime control. In fact, the National Academy of Sciences reviewed hundreds of studies and could not document a single gun regulation that reduced violent crime or murder."

Palmer: "If someone gets into your house, which would you rather have, a handgun or a telephone? You can call the police if you want, and they'll get there, and they'll take a picture of your dead body. But they can't get there in time to save your life. The first line of defense is you."