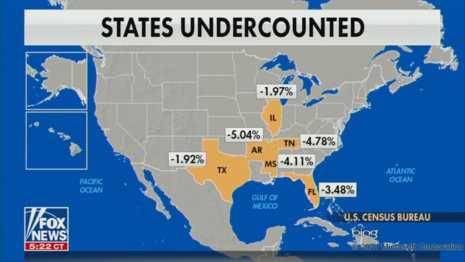 There has been near-total silence across leftwing broadcast (ABC, CBS, NBC) and cable (CNN, MSNBC) networks about a 2020 post-enumeration survey by the Census Bureau, which found errors made in the 2020 census heavily benefited Democrats and hurt Republicans. As of August 23, the only coverage any of these networks have given the report was a fleeting 4 a.m. mention on CBS.

The post-enumeration survey on undercount and overcount rates, which the Census Bureau conducts to measure the accuracy of their initial count, found that errors made in 2020 resulted in the misallocation of at least six congressional seats and billions of dollars in federal funding. This incorrect apportionment of House seats uniformly benefited Democrats.

In a piece for The Washington Times, The Heritage Foundation’s Hans von Spakovsky wrote of the miscounting:

Those costly errors will distort congressional representation and the Electoral College. It means that when the Census Bureau reapportioned the House of Representatives, Florida was cheated out of two additional seats it should have gotten; Texas missed out on another seat; Minnesota and Rhode Island each kept a representative they shouldn’t have; and Colorado was awarded a new member of the House it didn’t deserve.

The Bureau’s initial report on over- and undercounting was released on May 19. CBS was the only network to mention the findings at the time, in the form of one 24-second news brief which aired at 4:15 a.m. EDT on the May 20 edition of CBS Morning News. On June 3, Fox News Channel’s Special Report with Bret Baier devoted 75 seconds to the story, and Tucker Carlson Tonight spent an additional 34 seconds on the story on June 8.

The survey found that all but one of the states whose populations had been overcounted were Democrat-run, while the undercounting happened almost exclusively in Republican-run states:

The 2020 survey showed that the bureau overcounted the population in Delaware, Hawaii, Massachusetts, Minnesota, New York, Ohio, Rhode Island, and Utah…
The states whose populations were undercounted were Arkansas, Florida, Illinois, Mississippi, Tennessee, and Texas.

One can only imagine the bloodcurdling shrieks we’d be hearing on CNN and MSNBC if census errors had set Democrats back by even a single congressional seat, let alone six. Instead, neither they nor ABC or CBS have spent even a second of airtime on this disastrous mishap by Census Bureau.