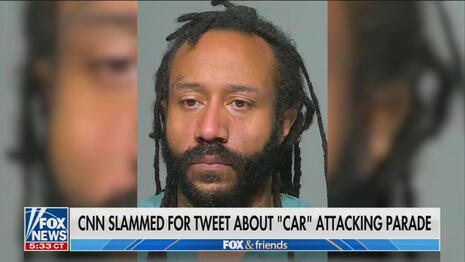 If Darrell Brooks were a white man who drove a car into a crowd of black people, the media would still be talking about Waukesha.

The name Darrell Brooks hasn’t been uttered a single time on CNN since last Thursday, November 25. Today marked the first time anyone on MSNBC mentioned Brooks by name since last Wednesday, November 24. The scant coverage came in the form of a hasty (34 seconds) news brief that ran once each on the network’s two morning programs, Way Too Early with Jonathan Lemire and Morning Joe.

How about the fact that Brooks is a felon who has reportedly expressed hatred for white and Jewish people? Or the fact that witnesses report he appeared to be swerving his vehicle so that he would hit as many pedestrians as possible? Nope, those facts apparently aren’t important enough to make it onto CNN or MSNBC. Nobody on either network has breathed a word about any of that.

You know why – everybody knows why. It’s because the media are peddling a nasty portrait of America in which countless violent white supremacists and racist police officers run rampant, carrying out calculated attacks on people of color with alarming frequency.

This simplistic narrative has no room for any person of color who hates white people. Those people, even if they did exist, somehow couldn't be racist.

If that’s not how our esteemed fourth estate are thinking about this story, then why are they suddenly so disinterested in it? Why are they deliberately skimping on the details? What’s with the obfuscatory headlines verging on parody, like this one from CNN claiming that the attack was perpetrated by “a car?”

That’s not a rhetorical question this time – let’s see somebody from CNN or MSNBC try to explain why their network is dishonestly framing Waukesha as some sort of freak car accident, when they can be bothered to talk about it at all.

Let’s hear an explanation from CNN’s sniveling media reporter, Brian Stelter. Let’s hear from MSNBC’s hatred-peddling Democratic loyalist, Joy Reid. Until they offer a convincing alternative, it’s hard not to conclude that they and their colleagues are intentionally forcing this story down the memory hole because (1) Brooks is black, and (2) his victims are predominantly white.

If they want to prove me wrong, they can cover the story then. The entire story.

CNN and MSNBC still have yet to mention Brooks’s name since the above dates. Both networks have offered occasional updates about the status of the victims, but they remain reluctant to divulge any further details about the attack itself (let alone speculating on the motive).

Meanwhile, other outlets are still peddling absurdly vague descriptions of the massacre – most recently on the December 7 edition of NBC’s Today, when fill-in host Tom Llamas equivocated: “An out-of-control SUV crashed right through the Waukesha Christmas parade.” Naturally, Llamas didn’t say anything about the person driving the SUV in question.