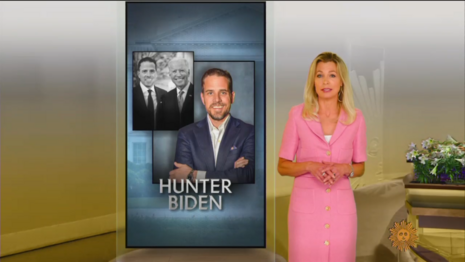 Hunter Biden’s new book deal landed him a sympathetic interview on this weekend’s CBS News Sunday Morning with correspondent Tracy Smith. While the interview alluded to various political scandals plaguing the younger Biden (namely the Burisma controversy, the laptop scandal, and an ongoing active investigation into his finances), it provided viewers with barely any information about the scandals themselves, while giving him plenty of time to argue his innocence.

The interview allowed a scant 26 seconds about the ongoing investigation into Hunter Biden’s finances. “What is it about? Can you say anything more?” Smith inquired. Biden insisted he was innocent and she politely moved on.

Readers will recall that in 2014, Hunter Biden was awarded a spot on the board of a Ukranian energy company called Burisma, at the same time that his father, then-Vice President Biden, was tasked with handling the Obama administration’s dealings with Ukraine.

This might have been a good opportunity for Smith to inquire (for example) how her guest had landed that position despite having had no prior experience in the energy industry. Instead, she fixated on the optics of the arrangement, thus playing into the Biden defense that the ordeal was all a big misunderstanding:

TRACY SMITH: Looking back, did you make a mistake taking a spot on that board?”

SMITH: But you must have seen the optics. Even back then, you must have. I mean, how could not have foreseen that this was going to look bad?

BIDEN: Because I really didn’t. I’m being as honest with you as a possible can. All I know is, not one investigative body, not one serious journalist has ever accused — has ever come to the conclusion that I did anything wrong, or that my father did anything wrong.

“But the rumors lived on,” Smith lamented, segueing into a portion about the laptop scandal (beg your pardon — the laptop “rumor”).

The Friday morning preview of this interview contained an admission from the younger Biden that the laptop “could be” his. Unfortunately, the full interview that aired on Sunday failed to provide anything else of note about the topic. Instead viewers were treated to another insinuation that the whole story was Russian propaganda:  “Last month, a declassified intelligence report said that before the election, the Russians had launched a smear campaign against Joe Biden and his family.”

Then followed the toughest portion of the interview for Biden: Smith admitted that the aforementioned intelligence report made no mention of Biden's laptop, and even got her guest to admit that the laptop at the center of the controversy “could have been” his. The MRC's Scott Whitlock covered this exchange in more detail here.

While Smith deserves credit for teasing that sound bite out of her guest, it would be a stretch to describe her performance as adversarial. For one, she failed to elaborate on even the scandal’s most basic details, and viewers were never told what the contents of the laptop allegedly were. She also avoided asking perhaps the most obvious follow-up question imaginable: “How could you not know whether a laptop, which allegedly contains emails in which you attempt to trade your father's influence for profit, is yours?”