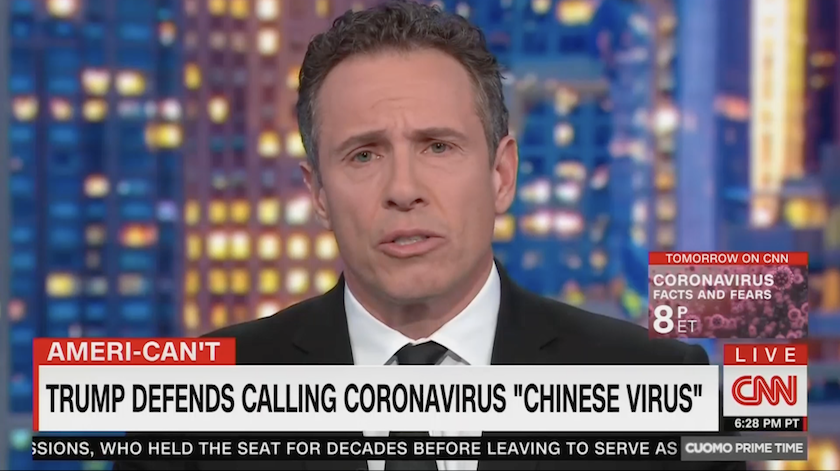 TV journalists have yet to go a day without crying “racist” in the nearly two weeks since President Trump accurately stated that the current coronavirus outbreak originated in China. But although the President’s continued assertions that the virus is “Chinese” or “foreign” have so thoroughly upset the media, most of them are unable to explain what exactly has them so upset about it.

Since Trump tweeted about a “foreign virus” on March 12, journalists have dialed up their disgust when reporting on the President’s word choice on the air. These instances were often accompanied by theatrical grimaces, as though the inappropriateness of the word “foreign” were so obvious that it needed no explanation.

Rachel Maddow was a quintessential case of this “wow-just-wow” reaction on the March 12 edition of her MSNBC show: “That is so wrong. It is such an irrational, unscientific, nonsensical way to talk about this.”

Predictably, Maddow didn’t elaborate on how calling a Chinese virus a Chinese virus was “unscientific” or “irrational.” Indeed, aside from its capacity to offend the liberal sensibilities of TV journalists, nobody seems capable of articulating what exactly is so bad about naming a pathogen after the country in which it originated.

Others in the media have alluded to vague incidents of discrimination against Asian Americans that (they claim) were “caused” by the President’s rhetoric. But of again, none have bothered to elaborate on how Donald Trump saying “Chinese virus” could have caused somebody to attack an Asian person.

While the wisest among the race-baiting crowd have only alluded to a link between the President’s rhetoric and anti-Asian racism, others have flatly stated that such a connection exists — without evidence, of course. The most recent instance NewsBusters could find was on the Sunday edition of MSNBC’s AM Joy, where former self-identified “conservative” Kurt Bardella pontificated:

Well let me just say, as an Asian-American, yeah, it is racist, Donald Trump. So stop using it. There are right now people who are being subjected to racism, they are being attacked, they are being targeted, partly because Donald Trump is driving this racist narrative.

To be clear, there are indeed reports of Asian people being baselessly accused of spreading the virus, as well as at least one alleged physical attack. Journalists can and should report on these cases. That doesn’t make it any less idiotic to claim, with no evidence, that the President willed these incidents into existence by accurately identifying where the virus originated.

And let’s not forget the CNN hosts who laughably attempted to “fact-check” the phrase “Chinese virus.” CNN host John Berman offered up this argument on the March 12 edition of New Day: “He called it a foreign virus, when the fact is, it’s here in America.” His co-host, Alisyn Camerota added helpfully, “Obviously viruses don’t have a nationality.”

On March 16, CNN Tonight host Don Lemon did his best with this non-argument: “He is still tweeting tonight about what he calls the Chinese virus, even though there are now more reported cases outside of mainland China than inside.”