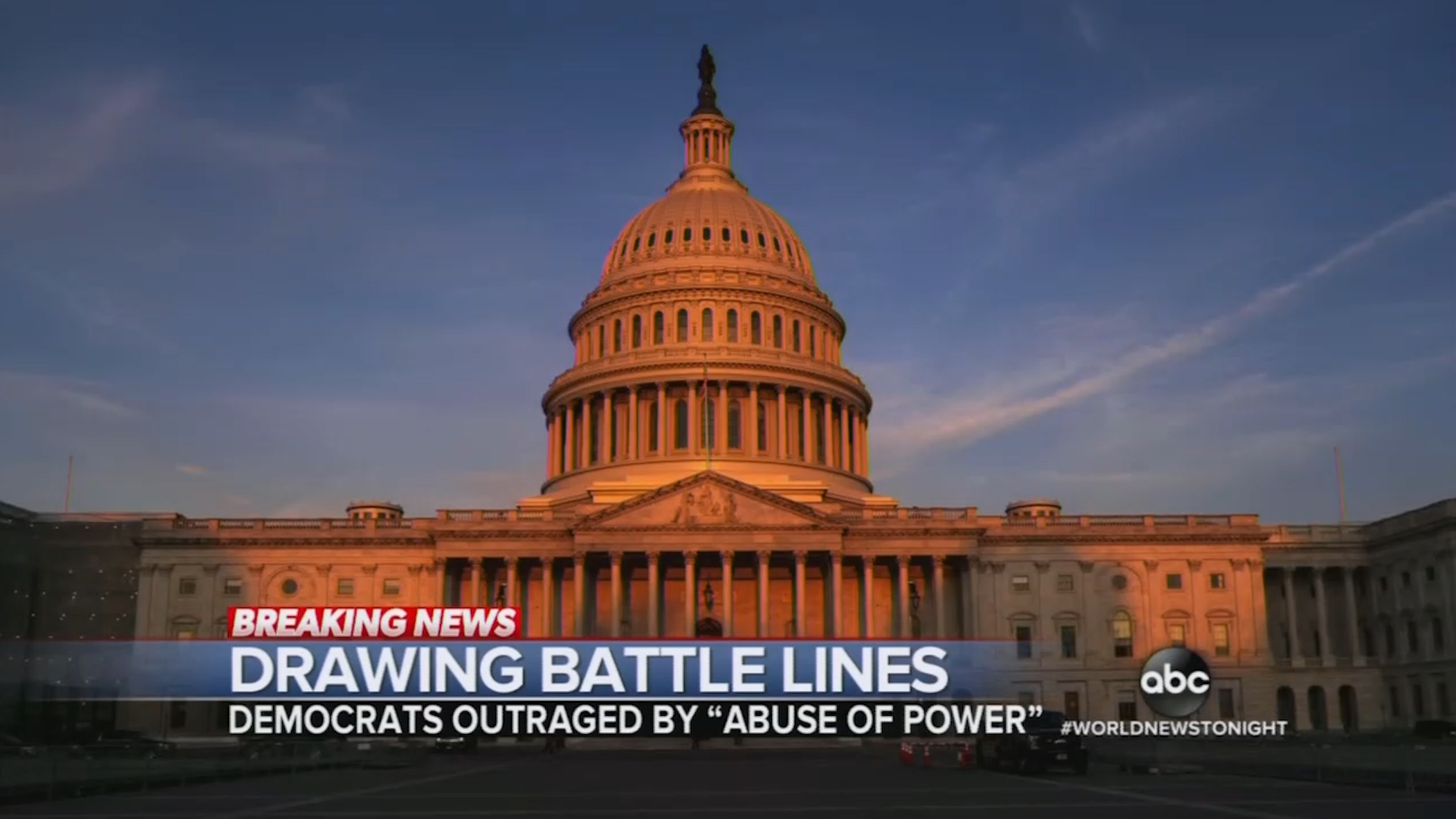 Even a casual watcher of broadcast news these days knows that journalists are using increasingly emotional language in their reports. Case in point: the word "outrage," which MRC analysts found was used 229 times in ABC, CBS and NBC's evening news reports in 2019.

But our examination shows network reporters used that term far more frequently in stories that might offend liberals, with networks blaming President Trump and Republicans for triggering more “outrage” in 2019 than child abuse, sexual assault, racism, and even police brutality.

MRC analysts examined every instance of the word “outrage” in broadcast evening news reports throughout all of 2019. Despite all of the wars, crime and other horrors in the world, the media seemed to think U.S. politics was the biggest cause of outrage, with 64 political stories using the term.

But don't think the term was employed even-handedly. President Trump and his fellow Republicans received the lion’s share of the blame in this category: 51 instances, or 80 percent of all political outrage, while Democrats accounted for less than one tenth of that (just five stories, or 8%). For the remaining eight cases, the individuals or organizations said to be causing outrage were not explicitly partisan.

By contrast, networks used the term just 14 times regarding rape, sexual assault, and harassment – suggesting that, at least according to the broadcast networks, Trump and Republicans were over three times more outrageous than rape in 2019. The President and his allies also were associated twice as often with “outrage” as child abuse (25 instances) and nearly twice as much as racism and bigotry (28 instances). 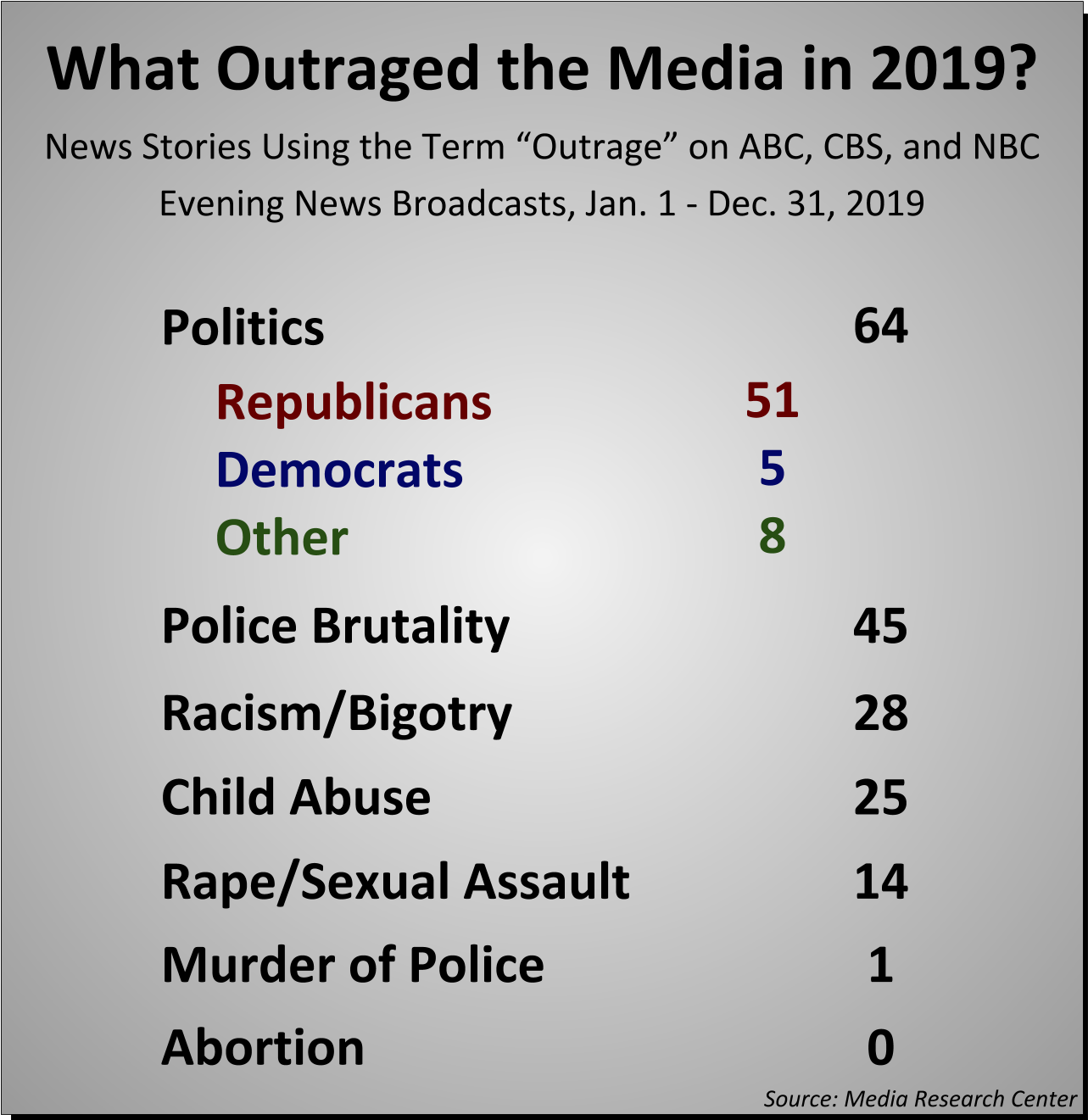 While alleged police brutality was associated with the word 45 times in 2019, there was only a single case in which the term was attributed to the killing of a police officer. That solitary instance was a CBS Evening News report on December 9, which mentioned that Saudi Crown Prince Mohammad bin Salman had supposedly expressed outrage and condolences to President Trump after a Saudi national murdered an American police officer.

A liberal skew was also present in the networks’ reporting on abortion. Although multiple newscasts detected outrage at Republicans’ attempts to restrict the practice, no news story mentioned pro-life outrage over Democrats’ attempts to expand it. Broadcast networks even failed to use the term when a deceased abortion doctor’s family found more than 2,200 fetal remains in his home.

But for all their efforts, it appears the broadcast networks are still a ways out from being sufficiently progressive. Any liberal reading this report will no doubt be horrified to learn that all five network reports blaming Democrats for outrage identified a woman as the culprit. Worse yet, three of those five instances involved Representative Ilhan Omar (D-MN) – a Muslim woman of color. The other two Democratic women in these stories were Senator Elizabeth Warren (D-MA) and Pam Northam, the wife of Virginia Governor and blackface enthusiast Ralph Northam, who sparked outrage when she distributed cotton balls to black middle school students on a field trip.

Regardless of whether anyone at ABC, CBS, or NBC actually believes that the President and his party are three times as outrageous as rape, or twice as outrageous as child abuse, their reporting over the past year nonetheless suggests that this is the case. Because loaded terms like “outrage” are subjective, these networks can add a liberal spin to their coverage without ever making a false claim.