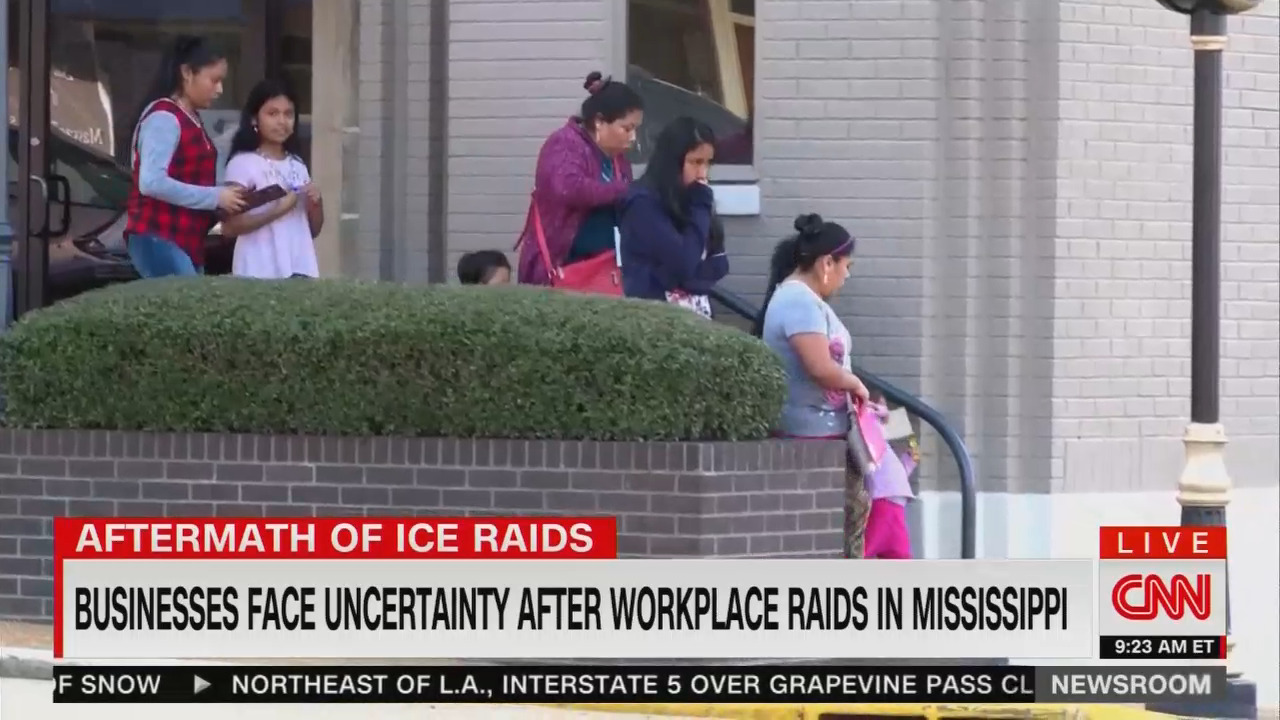 Apparently CNN’s stance is that illegal immigration is good, and that the correct way to refer to illegal immigrants is, “Latinos.” That’s according to a report about ICE raids that ran on Monday’s CNN Newsroom during the 9:00 a.m. ET hour, in which the network failed to use the term “undocumented” even a single time.

Fill-in host Ryan Nobles introduced the piece by describing a series of ICE raids in Mississippi as though a category five hurricane had ravaged the state:

A Mississippi town is still reeling months after a series of massive workplace immigration raids. Families say they’re living in fear and businesses are struggling to stay afloat after nearly 700 mostly Latino workers were arrested on the job back in August.

Notably absent from Nobles’s introduction was any indication that those “mostly Latino workers” had been arrested for entering the country illegally. Perhaps it’s a waste of time to criticize CNN for refusing to use a term like “illegal immigrant” — but amazingly, neither Nobles nor CNN correspondent Nick Valencia, who narrated the piece, would even admit that the workers arrested by ICE were “undocumented.” No, to Nobles and Valencia, these individuals were just “Latinos.”

“Latinos make up nearly a quarter of the more than 3600 residents in Morton Mississippi,” Valencia remarked, “but looking at the streets, you wouldn’t be able to tell. As rumors spread of another raid, most have chosen to spend their days in hiding.”

As with any pro-illegal immigration puff piece, the report included a clip of the town’s mayor paraphrasing the Christian perogative to “love thy neighbor.” Valencia added: “Despite what has happened, he says, Latinos are still welcome in Morton. But for the Latinos still left, the life they once saw for themselves here may no longer exist.”

Valencia’s description made it sound as though a gang of racist ICE raiders been scouring the town for innocent minorities. And considering CNN was so disturbed by the enforcement of America’s borders that they cobbled together this report, it’s difficult to imagine that this false impression wasn’t intentional.

A town “reeling,” families “struggling,” and a community “changed” — these are descriptors that one might expect to hear after a mass shooting or a natural disaster. But it’s also how the Facts First network portrays a nation enforcing its own laws.

Click "expand" below for a full transcript of the report:

RYAN NOBLES: A Mississippi town is still reeling months after a series of massive workplace immigration raids. Families say they’re living in fear and businesses are struggling to stay afloat after nearly 700 mostly Latino workers were arrested on the job back in August. CNN’s Nick Valencia has more on the economic impact of what was described as the largest workplace sting in at least a decade.

NICK VALENCIA: (Voiceover) Like so many others here, Sofia Hernandez is worried. Three years ago she used the money she saved while working at the local chicken plants to buy this Mexican market. But now with business crippled by the ICE Raids in August, she doesn't know if she'll be able to keep it open. She's had to cut the hours of her employees.

VALENCIA: (Voiceover) Latinos make up nearly a quarter of the more than 3600 residents in Morton, Mississippi. But looking at the streets, you wouldn't be able to tell. As rumors spread of another raid, most have chosen to spend their days in hiding.

In the nearly four months since the raids on chicken processing plants across six Mississippi cities, Miguel Tambrez’s wife is among the dozens still detained, leaving him to care for their three children alone. Their daughter was just four months old when it happened. She was still nursing.

VALENCIA: “She cried and cried,” he says of his baby. “There were days when I was in such despair, but I had to keep on fighting for her,” he says. He's physically and mentally exhausted, and so is his wife. Recently while in custody, she signed voluntary deportation orders. Soon, the family will be reunited again, but not in the United States.

VALENCIA: “It's not that it was hard for me. It still is hard for me,” he says, about the financial burden of being the sole breadwinner, and now, sole caretaker.

(Voiceover) Those who were released from ICE custody with court dates were let go on the condition they couldn't work. And that makes it hard to pay the bills, which means they’ve had to rely on the kindness of others, including churches like this one. But even they don't know how much loner it’ll last.

Sheila Cumbest had only been pastor at the United Methodist Church in morton for four weeks when the raids happened. Her life and church have been consumed by the event ever since.

SHEILA CUMBEST: Just in Morton alone we're helping 110, 115 families. Paying bills is expensive. So far the money we've spent is around $151,000 since the first week. Every day it's just facing the same sort of despair in people's lives. And wondering what's next.

VALENCIA: (Voiceover) Even the Mayor says the town has changed since the raids. He tells us the plant raided in Morton accounts for 45% of the city's revenue. A business powered by Latino labor. Despite what happened, he says, Latinos are still welcome in Morton.

MAYOR GERALD KEETON, SR.: Regardless, I mean, whether they are documented or undocumented, you should have compassion for your neighbor.

VALENCIA: But for the Latinos still left, the life they once saw for themselves here may no longer exist. Nick Valencia, CNN.