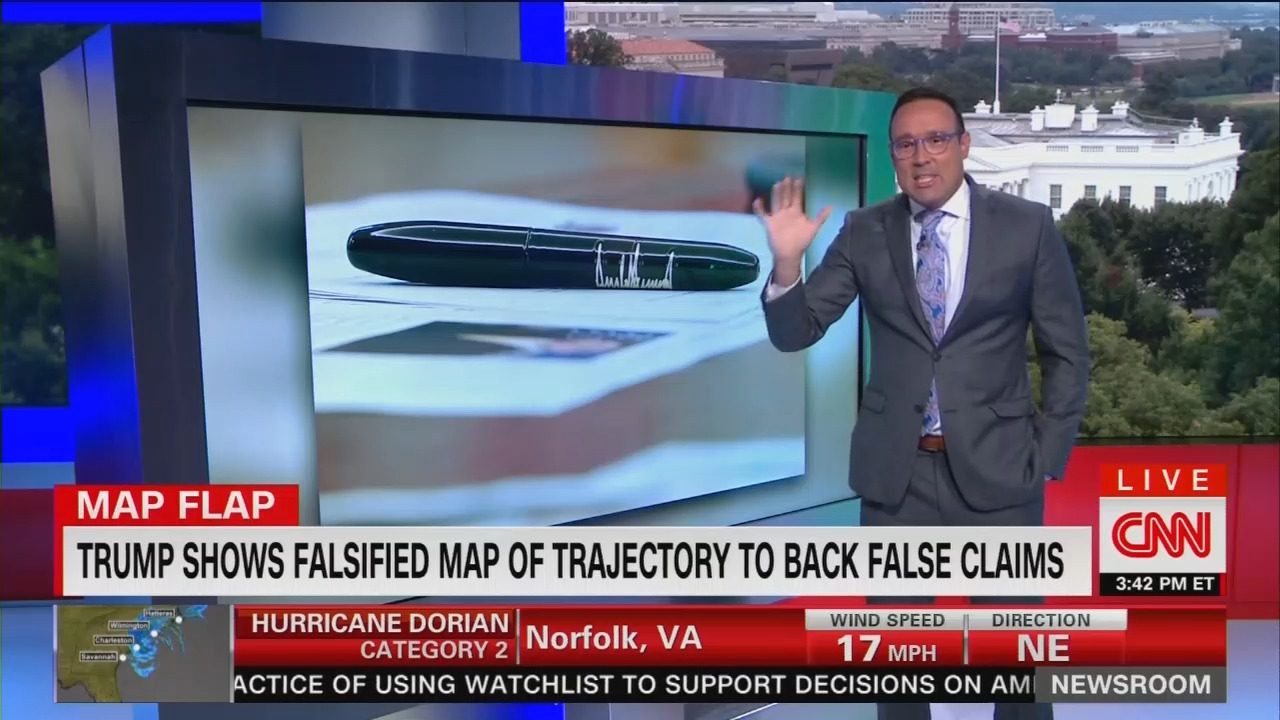 As Hurricane Dorian continues to wreak havoc across the eastern seaboard, liberal cable anchors are fixated on perhaps the most frivolous piece of the news cycle: President Trump’s poorly-doctored hurricane map. Between 5:00 am and 5:00 pm Eastern time on Wednesday, CNN and MSNBC gave this non-news item a whopping 145 minutes (just under two and a half hours).

CNN gave the map incident just over 64 minutes of airtime. Between bouts of theatrical scoffing, hosts brought in analysts or outside experts to explain precisely why the President’s doctored map was a travesty of heretofore unseen proportions.

The first instance of this was during the 11:00 am ET At This Hour, in which CNN’s Brian Stelter joined the panel to share his eternal concern about the President’s mental state.

“I wish he was tweeting more about the Carolinas and what’s going on around the coast, and not Alabama,” Stelter complained near the end of seven and a half-minute segment which focused entirely on Trump’s map.

Some anchors, particularly New Day co-host Alisyn Camerota, were insistent that the President’s ill-fated art project was in fact a serious crime; Camerota sternly repeated that claim five times throughout the morning. No word yet on whether this high crime has finally moved recalcitrant House Speaker Nancy Pelosi on impeachment, but stay tuned.

On MSNBC, the so-called “sharpiegate” story took up an absurd 81 minutes of airtime. Not surprisingly, the two shows offering the most coverage were the network’s opinion-dominated Trump Derangement Syndrome group therapy shows: Morning Joe (29 minutes) and Deadline: White House (16 minutes).

Speaking of the latter, the perpetually-flustered Wallace began her show by decrying Trump’s fixation with this narrative while Americans are in danger while she herself engaged in that behavior (click “expand”):

If only Donald Trump tackled gun violence, the deficit, or pediatric cancer with the same zeal he's displayed in proving he was right all along by his claims that Alabama was in the path of Hurricane Dorian, a forecast so off base that the National Weather Service correctly the president immediately and today as Hurricane Dorian continues to threaten life and property, Donald Trump is still at it. His Alabama tweet count today stands at four but those numbers are expected to rise as Donald Trump surveys the damage to his reputation, which now includes sharing a false weather forecast and doubling down on it...Former FBI Director Jim Comey put the President’s conduct like this: “Americans are in harm’s way and the president is laser-focused on ... covering up a small mistake he made. Narcissism is not leadership. America deserves better.” The Sharpie debacle is part of a pattern of two dangers Trump phenomenons, lying and doubling down.

During the noon Eastern hour, reliably anti-Trump correspondent Yamiche Alcindor of the PBS NewsHour suggested without evidence that the President’s invoking of Alabama “could be causing panic and chaos” as people in hurricane-prone areas are “collecting supply and preparing themselves.”

But just hours earlier, Morning Joe had featured analysis from proven forger of documents Dan Rather, ironically to pillory the President (possibly) for drawing a semicircle on a map (click “expand”):

MIKA BRZEZINSKI: What can you say?

RATHER: It does raise some questions, all kinds of questions. But, you know, I've been reluctant to go there as to whether there's something wrong with him. But when he something, frankly, this dumb, you know, I am myself, as you well know, can be as dumb as a fencepost about a lot of things, but reaching it — this, I mean, it — I'm just almost speechless about it, but it does race questions as to whether something is really, really wrong with him.

Each program on both CNN and MSNBC had at least one full report on this story, none of which did anything either to alert those in the path of Hurricane Dorian or to offer advice on how affected individuals could stay safe.

By contrast, MSNBC Live host Hallie Jackson offered only 37 seconds of “sharpiegate” programming, while her colleague Ali Velshi didn’t mention it at all. The second hour of Poppy Harlow and Jim Sciutto’s CNN Newsroom also managed to avoid the subject entirely.

To be clear, the public track the President showed Wednesday was undoubtedly drawn on to include Alabama. Meteorologists fact-checked of the President and have provided the public with the most up-to-date forecasts. But amidst this deadly storm, CNN and MSNBC have once again prioritized dousing the President over reporting the actual news.