New Mantra: CNN Chants Report 'Does Not Exonerate' 120 Times in a Day 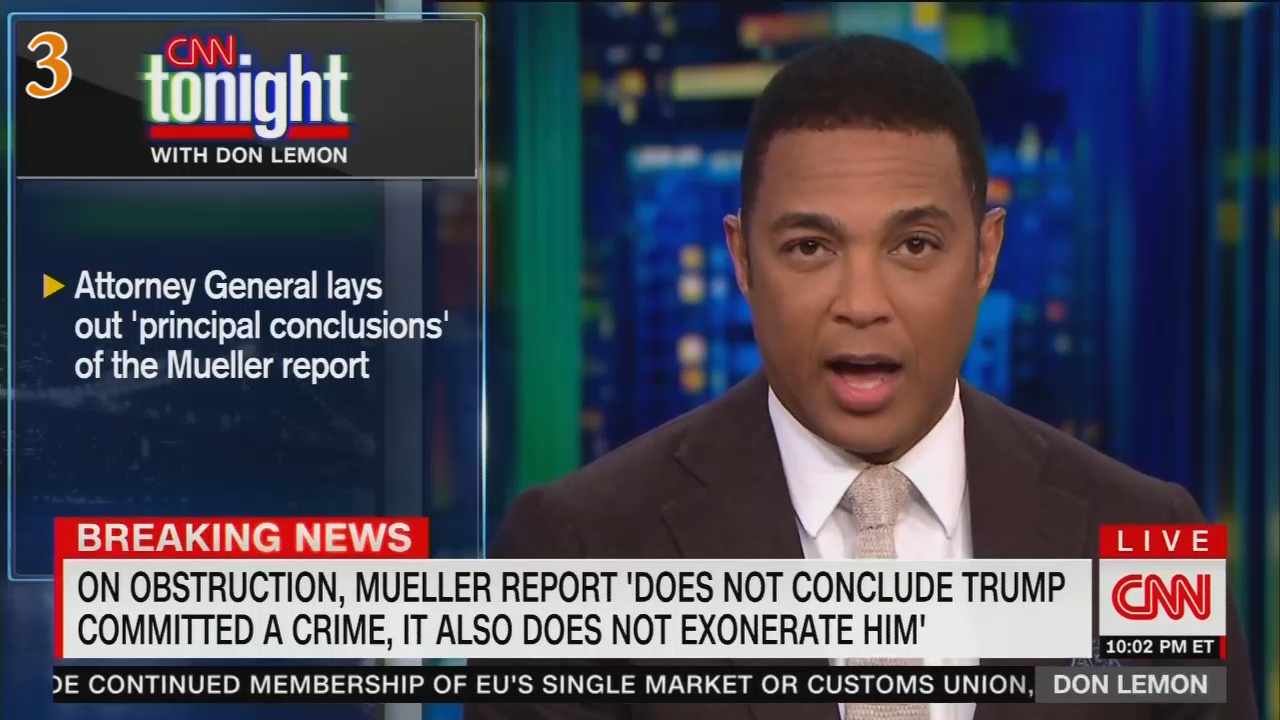 Attorney General William Barr's inclusion of the phrase “does not exonerate” in his summary on Sunday afternon of the Mueller report has become a much-needed security blanket for liberal journalists. For the past 24 hours, CNN analysts, commentators, correspondents, and hosts have clung to the phrase, repeating it ad nauseam in a vain attempt to reassure themselves that maybe — just maybe — President Trump might still be found guilty of obstruction of justice.

MRC analysts looked at the past 24 hours of CNN coverage (from 5:00 p.m. Eastern on March 24 to the same time the following day), and found a total of 120 instances in which hosts or other journalists asserted that President Trump had not been exonerated. Those 120 cases did not include quotes from Democratic politicians or other explicitly partisan sources.

To see just how desperately the denizens of America’s premiere “Facts First” network are clinging to those three magical words, watch the video below:

About one third of those 120 instances were journalists reading aloud the same phrase found in Barr’s summary of the Mueller report, which read:

…while this report does not conclude that the President committed a crime, it also does not exonerate him.

Every show featured at least one direct reading of that line, while some uttered it at a considerably higher rate. CNN Tonight host Don Lemon was particularly entranced by this verbiage, going so far as to read it aloud seven times during the course of his two-hour show (and twice within the first five minutes). Lemon’s show was responsible for about one fifth of all assertions that the President had not been exonerated: 27 times in two hours, with 12 of them coming from Lemon himself.

That busy 24-hour stretch also featured interviews with seven different House Democrats who, to nobody’s surprise, repeated the same talking point. The only non-Democratic politician to appear on CNN during that time period was Ohio’s former (supposedly Republican) Governor John Kasich, who is a senior CNN political commentator.

As far as the veracity of the claim that the President has not been exonerated? That’s only true of one believes Special Counsel Mueller is the only individual capable of doling out said exoneration. Mueller himself left the determination of whether to prosecute President Trump for obstruction of justice up to the Attorney General, who in turn determined that the President was not guilty of any such crime.