STUDY: CNN’s 'The Situation Room' Is a Weeklong Promo for Dem Investigations

CNN’s Wolf Blitzer has spent the past week using his evening show The Situation Room as a platform for Democratic lawmakers to plug their numerous investigations of President Trump. Blitzer, a veteran reporter and host on the network, is not a name that immediately springs to mind when one thinks of biased or outlandish statements from CNN journalists. However, the many interviews he has conducted with politicians on the Hill — a staple of his show — tell a story of bias through careful and deliberate framing of facts.

MRC analysts looked at the 10 interviews Blitzer conducted with lawmakers (all Democrats) on his show during the week spanning Monday, March 3 to Friday, March 8. Throughout those ten interviews, the CNN host asked only three questions (3%) that suggested the numerous House investigations into the President might be partisan or politically motivated. The remaining 86 investigation-related questions (97%) either accepted at face value the importance of these inquiries, or else pressed Democrats to go even further in their oversight role. 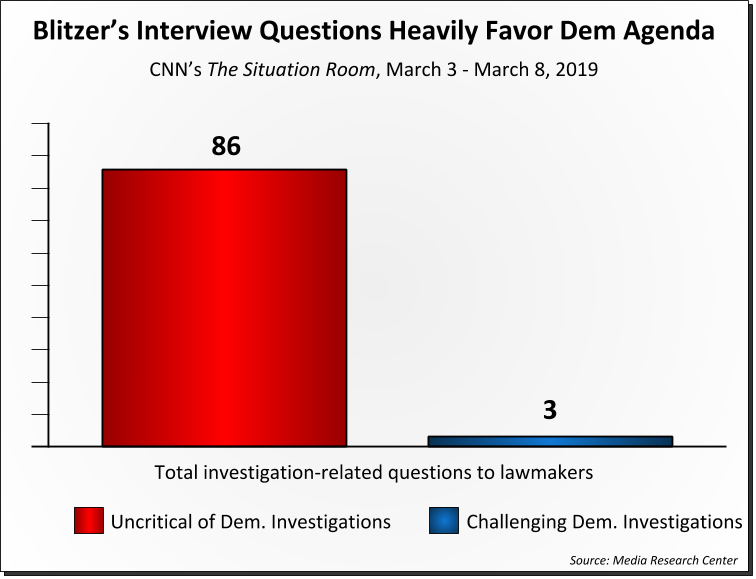 Blitzer framed his paltry three challenges to Democrats as party-line criticism coming from Republicans (“as Republican are alleging…”, “Republicans say…”). In each case he asked no follow-up questions regardless of what answer he received.

At times, Blitzer pressured his guests to be more aggressive in their investigation of President Trump. For example, on Tuesday, March 4, the CNN host prodded Rep. Steve Cohen (D-TN): “The White House is indicating they are not in any mood to cooperate with your investigation. Why haven’t you issued subpoenas?”

Later that same evening he further pressed the same issue with California Democrat Harley Rouda: “You haven’t issued subpoenas yet? You’re waiting? Why not issue subpoenas right away?”

Blitzer also fixated on the issue of impeachment, with each guest getting at least one question about whether they planned to impeach the President. Other questions resembled little more than open-ended prompts for his guests to pontificate about the President’s various misdeeds:

“President Trump may have actually tried to — wanted to pressure the Justice Department to file a suit challenging the acquisition of Time Warner… From your perspective, is that an abuse of power?”’
Question for Rep. Madeleine Dean (D-PA), Monday, March 3.

“Do you believe the President’s legal team was dangling a pardon in an attempt to obstruct justice in the Cohen investigation?”
Question for Rep. Denny Heck (D-WA), Thursday, March 6.

“Manafort is facing up to potentially 25 years in prison. Manafort as the Trump campaign chairman. How will this reflect on the President?”
Question for Rep. Jackie Speier (D-CA), Thursday, March 6.

The video below highlights Blitzer’s biased and leading questions for lawmakers (both Democrats and Republicans) over the past few months: