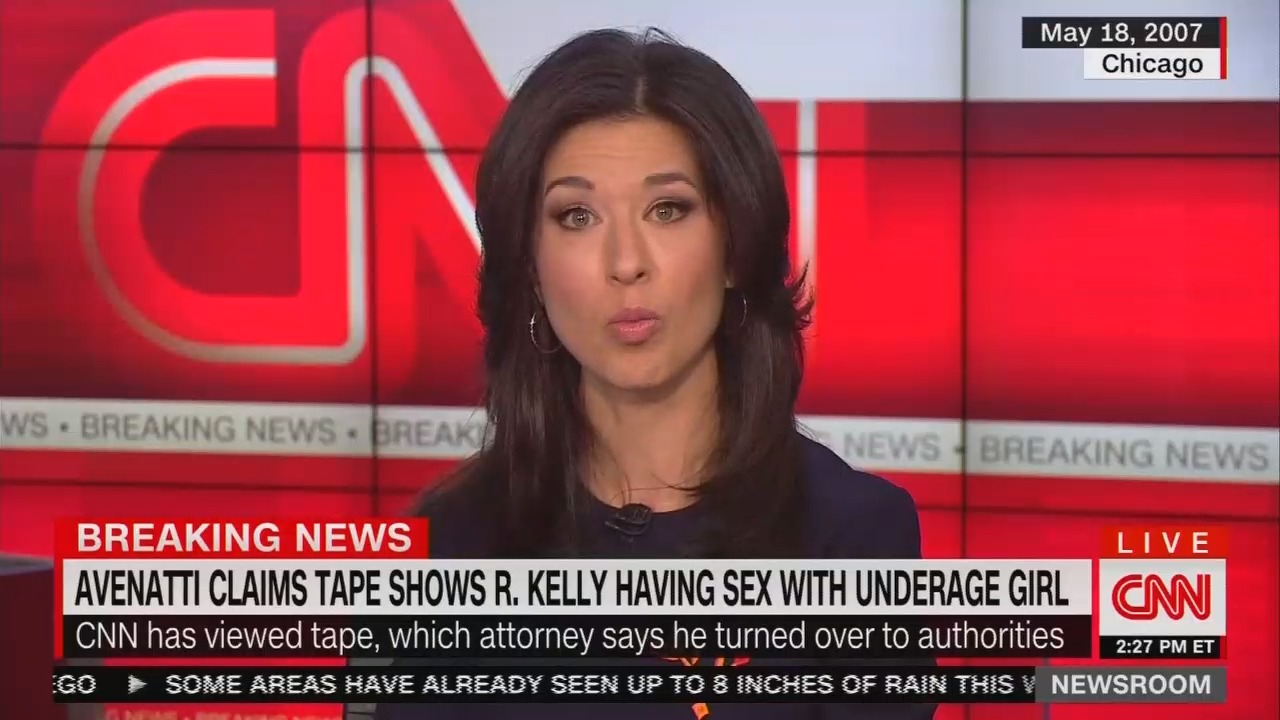 On Thursday, CNN broke an incredibly startling claim by Michael Avenatti, the former lawyer of adult film star Stormy Daniels, who claimed to possess a tape of R&B singer R. Kelly engaging in sexual acts with an underage girl. Perhaps equally surprisingly, CNN host Ana Cabrera claimed some at her network had watched the tape, though she offered no explanation as to how the network had access to it. Cabrera also did not mention the LA Times's reporting from earlier that day that Avenatti would be relinquishing control of his law firm after being accused of illegally concealing millions of dollars.

During the segment, which aired on the 2:00 p.m. Eastern hour of CNN Newsroom, a chyron ran at the bottom of the screen which read, “CNN has viewed tape, which attorney says he turned over to authorities.”

If Avenatti’s story, relayed secondhand through the cable network, is to be believed, then he certainly did the right thing by turning the tape over to the police. But neither Cabrera nor her panelists bothered to address the two most pressing questions that their reporting raised:

How did Avenatti acquire this tape – which, according to him, contained child pornography – and who had shared it with CNN?

Both the possession and sharing of child pornography are serious felonies. If CNN was able to watch the tape, as their own chyron claimed, then whoever provided them access to it might be in some serious legal trouble. Given the circumstances of the story, the two most likely candidates would be Avenatti himself, or someone at the law enforcement office to whom Avenatti surrendered the tape.

The utterly surreal segment provided no answers to these mysteries. Instead, CNN’s Sara Sidner described what was on the tape in uncomfortable detail, including that the female participant in the video identified herself as a 14-year-old. CNN legal analyst and criminal defense attorney Joey Jackson then discussed the potential legal implications of the development.

Also notably absent from the segment was any mention of the very real legal troubles currently facing Avenatti. On the same morning that this segment aired, Michael Finnegan of the Los Angeles Times wrote of the attorney-turned-cable-celebrity:

Michael Avenatti agreed Wednesday to relinquish financial control of his longtime law firm hours after a former partner filed papers accusing him of hiding millions of dollars from the court that oversaw its bankruptcy.

According to the Times, the suit against Avenatti alleged that he “used nefarious bank maneuvers” to conceal “millions of dollars from [the lawfirm's] creditors” while under bankruptcy protection.

A skeptical mind might wonder whether the timing of these two stories was somehow connected, and whether there was any particular reason why CNN had neglected to mention the considerable financial scandal plaguing Avenatti.