CBS Anchor: Is DHS Covering Up Deaths of Detained Children? 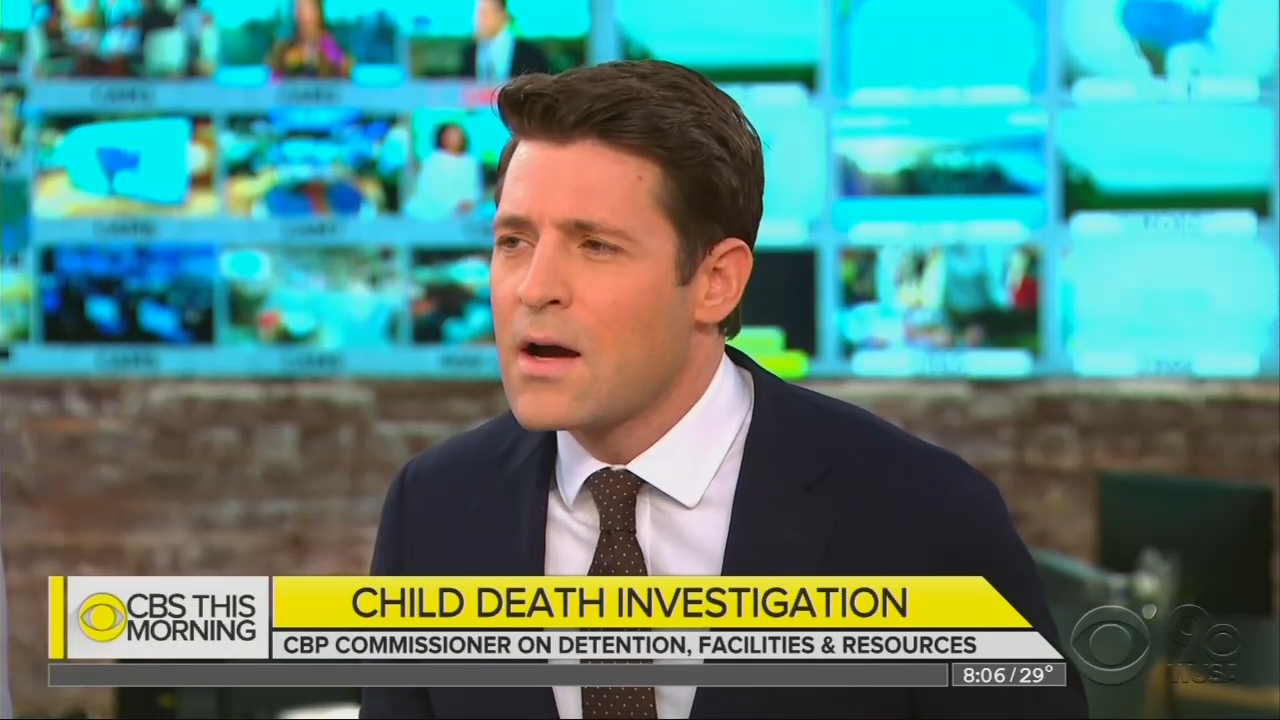 The stand-in hosts of CBS This Morning repeatedly implied on Wednesday that the Department of Homeland Security was responsible for the recent death of a detained Guatemalan child. In an interview with U.S. Customs and Border Protection Commissioner Kevin McAleenan, the second-string anchors asked a series of questions that framed the agency as either inept or calloused, at one point even suggesting that DHS officials might be covering up the deaths of additional detained minors in their custody.

Co-anchor Dana Jacobson’s first question framed the incident as the result of poor judgment by DHS personnel: “In our reporting earlier, Commissioner, it was that the child had a 103-degree fever earlier in the day. Why bring a sick child back to a detention center instead of keeping him at the hospital?”

The Commissioner explained that it was not within the purview of DHS to decide when a patient could be discharged from a hospital: “that’s a call made by the medical professionals.”

Undeterred by her misstep, Jacobson tried again: “But are you satisfied with the medical conditions and facilities, I guess, resources – that are available at these detention centers?” She added: “Should sick children come back into your custody there?”

This tack-on begged the question: if detained children discharged from medical facilities ought not to return to DHS custody, where should they go? Jacobson appeared to be suggesting (perhaps inadvertently) that sick children in DHS custody be released into the country.

CBS News correspondent and author Tony Dokoupil then questioned whether McAleenan's department had been covering up the deaths of other children in their custody: “I'm curious. We know of two children who’ve died in the past month. Can you guarantee us that there are not more children that we have not heard about that have also passed away?”

McAleenan responded that there were no such unreported cases.

As the interview drew to a close, it fell to Dokoupil to ask the question everyone knew was coming: “Is the government shutdown for a border wall that you may need, is worth it?” When McAleenan avoided giving a definitive answer, Dokoupil pressed further: “We’re really tight on time. Yes or no, do you think that shutdown is worth it?”

One could argue such a question would have been entirely appropriate to ask of Homeland Security Secretary Nielsen, given control over the entirety of the agency and her status as a Trump administration official. But in the context of the current interview, the its only value was in its potential to generate a sound bite.

For his part, McAleenan offered only vague support for a wall, while avoiding any mention of the shutdown: “We need border security investments, absolutely.”

To read a full transcript of the interview with CBP Commissioner McAleenan, click “expand” below:

ADRIANA DIAZ: Commissioner, good morning. Thank you for joining us. Just to start us off, what is the latest in the investigation of the eight-year-old’s death.

KEVIN MCALEENAN, CBP COMMISSIONER: Good morning. Well, with any death in custody we report immediately to our office professional responsibility and the DHS Inspector General. Both of those independent investigative arms have responded and already interviewed the father, and they'll be pursuing an investigation into the circumstances around this tragic event.

DANA JACOBSON: In our reporting earlier, Commissioner, it was that the child had a 103-degree fever earlier in the day. Why bring a sick child back to a detention center instead of keeping him at the hospital?

MCALEENAN: Well, that’s a call made by the medical professionals. He was in the emergency room, he spent almost five hours there. It was actually a border patrol agent who noticed that the child did not appear to be well on the morning of Christmas eve and the decision to transport the child and the father to the hospital, and it was the emergency room doctors and nurses who made the decision to discharge the young boy.

JACOBSON: But are you satisfied with the medical conditions and facilities, I guess, resources – that are available at these detention centers? Should sick children come back into your custody there?

MCALEENAN: I’ve explained to Congress, I’ve testified on this, I’ve talked about it publicly for months and months. That what we’re seeing with these flows of huge numbers of families with lots of children – young children as well as unaccompanied minors – coming into border patrol custody after crossing the border unlawfully. Our stations are not built for that group that’s crossing today. They were built 30, 40 years ago for single adult males. And we need a different approach. We need help from Congress. We need to budget for medical care and mental health care for children in our facilities, and I’m committed to improving our conditions, even as we work on the broader problems: border security, and of course, solving the issues in our legal framework that are inviting these families and children to make this dangerous journey.

DIAZ: Commissioner, given the misalignment in conditions and resources that you just outlined, I’m curious. We know of two children who’ve died in the past month. Can you guarantee us that there are not more children that we have not heard about that have also passed away?

MCALEENAN: Certainly there are not more children that you have not heard about in TBP custody that have passed away. This is an extraordinarily rare occurrence. It’s been more than a decade since we’ve had a child pass away anywhere in the TBP process, so this is just devastating for us. We’ve got over 1,500 emergency medical technicians that have been co-trained as law enforcement officers. They work every day to protect people that come into our custody. Border patrol agents made 4,300 rescues the last year. But for this specific scenario where we have these two children that crossed into El Paso sector of our border patrol sector, we responded by doing secondary medical checks. That means paramedics who are also border patrol agents checking each child in our custody to determine their health status again, in addition to the original processing. We’re doing dozens of hospital trips every single day with children that have fevers or manifest other medical conditions and we’ve asked for help. We’ve got two coast guard teams deploying today to support our border patrol agents and checking the welfare of children in our custody. And we’re working to move them to ICE and to better custody situations and releases as quickly as we can, so that we don’t have them in border patrol stations.

DIAZ: Commissioner, we were in Mexico traveling with the caravan for days, and we saw children traveling ten hours a day at least, walking under the hot sun, sleeping on the street in really dire, unhealthy conditions. What are you doing to ensure that these children are healthy, as healthy as they can be? And to have two deaths in three weeks, are these children slipping through the cracks?

MCALEENAN: Well, what we’re seeing is more children than ever before coming into our custody. At this pace in December we’ll have almost 25,000 children, most of them accompanied by parents who have crossed our border and arriving in custody. That’s an enormous flow that’s very different than what we’ve seen before. You mentioned the caravan families that did walk significant distances through Mexico before getting some transportation north of Mexico City. We’re seeing three different models. We’re seeing families coming in the hands of smugglers in very risky situations, taking almost three weeks, held in stash houses against their will, extorted, oftentimes subjects of abuse. We also see this new phenomenon of commercial bus transit, still in the hands of criminal organizations, but only taking four or five days to get to our border. That’s the phenomenon we’re seeing in El Paso sector where we’ve had these two tragedies. Of course, with so many children, with flu season, with many people coming ill, our job is to try to identify any children that need medical care and get them to a hospital as quickly as we can. And we're doing that. We're doing that with heart every day.

TONY DOKOUPIL: Commissioner, quick yes or no. Is the government shutdown for a border wall that you may need, is worth it?

MCALEENAN: So, we need investments across the cycle –

DOKOUPIL: We’re really tight on time. Yes or no, do you think that shutdown is worth it?

JACOBSON: All right, commissioner, thank you. We appreciate the time.