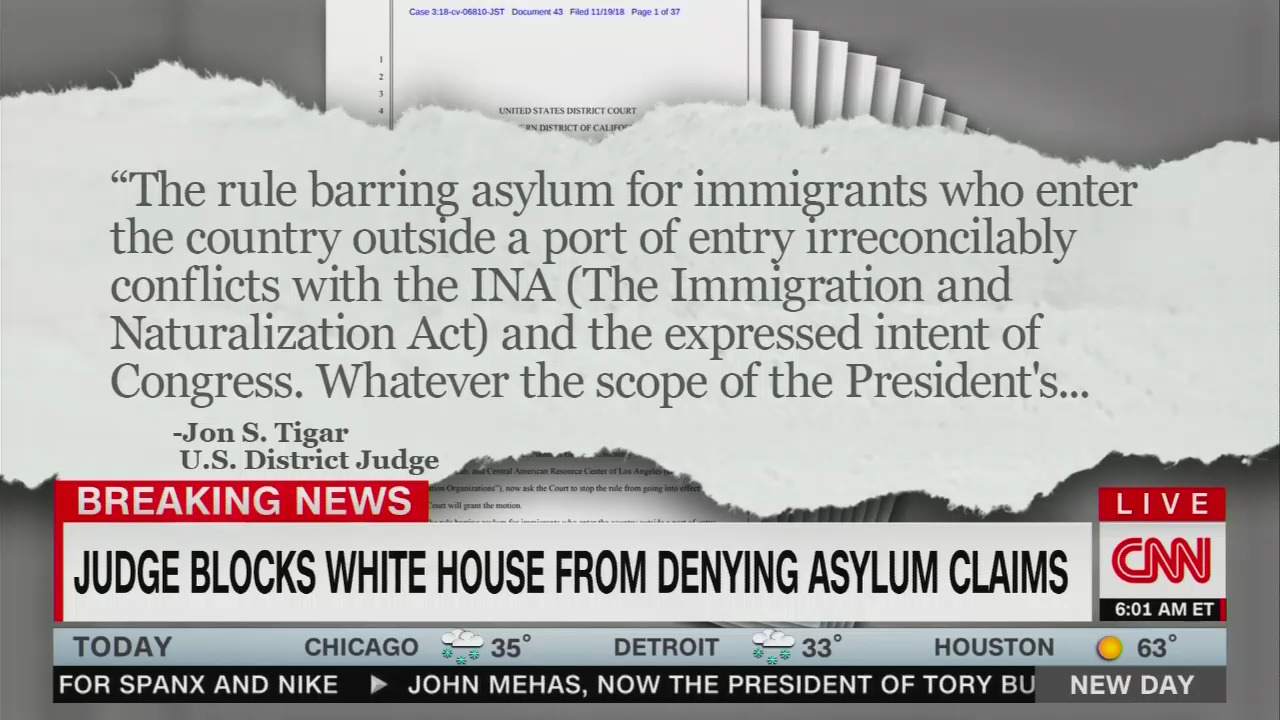 On Tuesday, CNN’s New Day hosts John Berman and Alisyn Camerota brandished a decision by a California judge that temporarily halted President Trump’s recent executive action on asylum. But back in 2012 when it was former President Obama’s DACA order on the chopping block, CNN hosts rushed to defend the President’s ability to enact immigration policy without Congressional approval.

The order by President Trump, which would have required asylum seekers to apply for protection at a designated port of entry, was halted by U.S. District Judge John Tigar, who wrote in part:

The rule barring asylum for immigrants who enter the country outside a port of entry irreconcilably conflicts with the INA (The Immigration and Naturalization Act) and the expressed intent of Congress. Whatever the scope of the President’s authority, he may not rewrite the immigration laws to impose a condition that Congress has expressly forbidden.”

Berman appeared wholly convinced by the Judge’s reasoning: “The judge is merely saying that the executive order infringes on a law passed by Congress... And the President unilaterally, by executive order, was trying to restrict [asylum] to ports of entry.”

The discussion then pivoted to whether the President even cared that his order had been challenged, with Berman speculating that the Trump administration’s move had been a cynical poitical tactic from the outset.

However, when President Obama passed his widely-criticized Deferred Action for Childhood Arrivals in June 2012, talking heads on the cable network rolled out all manner of arguments to explain why it was perfectly acceptable to enact immigration policy without Congressional approval.

On June 15, 2012 – the day that the Obama Administration announced the policy – CNN host Don Lemon ignored the legal angle entirely, instead smearing as “evil” any Republican who would dare challenge the order. During the 11 a.m. hour of CNN Newsroom, Lemon mused:

Okay, politically though, can Republicans really oppose this apart from repercussions from Hispanic voters? We're talking about productive young people who didn't knowingly break the law. And if they come out strongly against this, does this make them, in some way, seem mean or too stern or evil in some way?

During the noon hour of CNN Newsroom that same day, hosts Fredricka Whitfield and Wolf Blitzer insisted that President Obama had every right to bypass Congress with his new order:

WHITFIELD: So back to Congressional support, the President didn't need it for this kind of executive order, period. Right?

BLITZER: Right. They have a lengthy legal memo outlining why this executive order is legal, why they don't need Congressional action.

Here, Blitzer used the White House’s own justification for their policy as de facto evidence that the policy was itself valid. One wonders whether he would grant the same credibility to such a memo released by the current administration.

Blitzer later scoffed at a statement by then-GOP presidential candidate and future CNN senior political commentator Rick Santorum accusing the Obama White House of “blatantly ignor[ing]... the separation of powers” and Congress’s role in crafting legislation. The CNN host read a portion of Santorum’s statement aloud on The Situation Room, remarking: “Very angry statement. Much tougher than Mitt Romney's statement. That's just part of it. It goes on and on.”

If CNN hosts truly are troubled by the idea of a President bypassing Congress to enact immigration policy, then this is a rather new development.