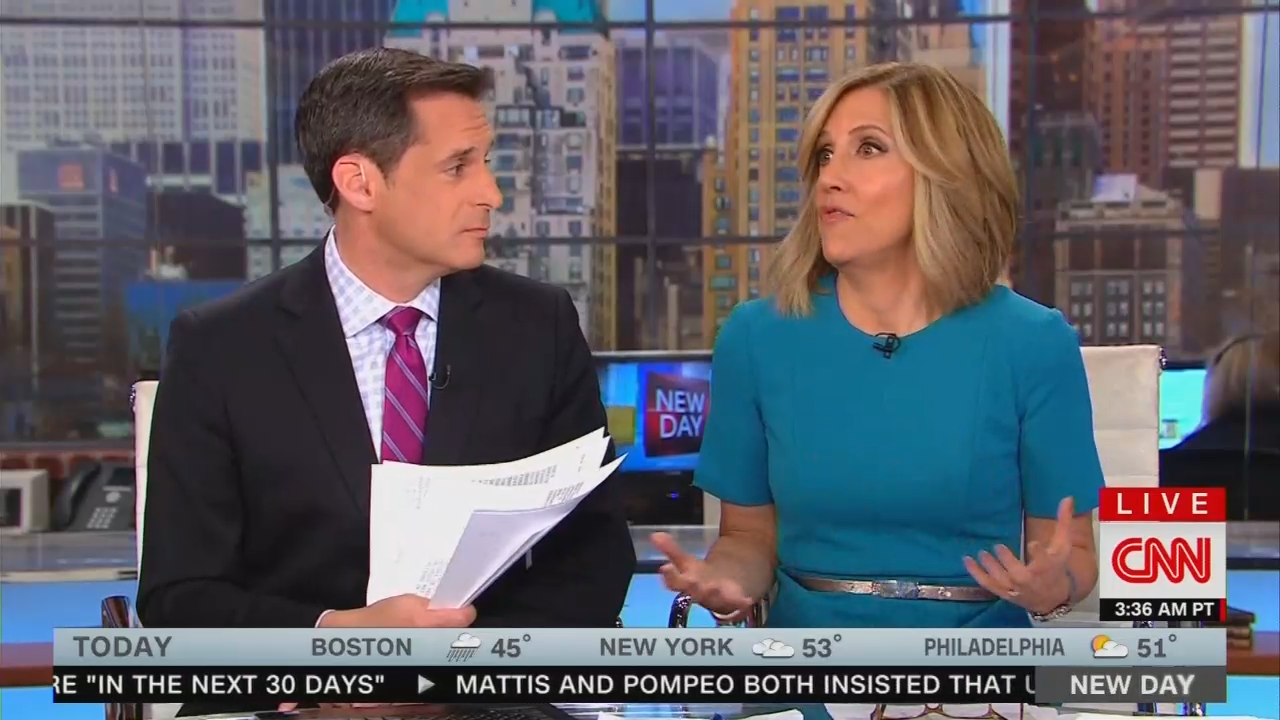 CNN's New Day co-host Alisyn Camerota broke out the pom-poms for Michelle Obama on Monday, wistfully speculating (on multiple occasions) that the “superstar” and “rockstar” might consider a presidential run in 2020.

Camerota’s giddy praise began during a segment in the show’s first hour about President Barack Obama’s surprise appearance at his wife’s book tour event: “Mr. Obama compared himself to Jay-Z, referencing the instances when the rapper appears at his wife’s concerts and surprises her on stage. And also, I guess, being married to a superstar.”

The CNN host touted the “rockstar reception” Mrs. Obama had enjoyed during her book tour, asking, “What does that mean? ...Would she consider a run as so many people are asking?”

“Oh my God,” interjected co-host John Berman, “how many more times does she have to be asked?”

Camerota repeated her antics during the 8 a.m. Eastern hour of the show, beginning with another exultation of Obama’s “rockstar” persona and ending with an awkward moment during an interview with former Obama adviser Valerie Jarrett.

During her conversation with Jarrett, Camerota once again broached the topic of a Michelle Obama run in 2020. However, her guest quickly quashed those hopes: “Let me be clear... she’s gonna use her incredible platform to be a force for good, but not in politics. You can bank on that.”

“So you’re saying there’s a chance?” Camerota replied, before breaking into an uncomfortable bout of forced laughter.

Camerota's shameless on-air advocacy Monday was reminiscent of her behavior the previous week, when she aggressively supported Congresswoman Pelosi's bid for the House Speakership.

Click "expand" to read transcripts of the releveant segments below:

AILSYN CAMEROTA: I don’t know who was running the camera there, but that was former President Barack Obama. He brought a bouquet of flowers for his wife. Mr. Obama compared himself to Jay-Z, referencing the instances where the rapper appears at his wife’s concerts and surprises her on stage. And also, I guess, being married to a superstar.

JOHN BERMAN: Good for them. I’m very happy for them, and they had their moment.

CAMEROTA: We will be talking at some point about her book tour. Because the crowd’s that she’s getting, the rock star-like reception she’s getting, what does that mean?

CAMEROTA: We’re also going to have President Obama’s senior adviser, Valerie Jarrett, on to tell us, what is Michelle Obama thinking? Would she consider a run as so many people are asking?

BEMAN: Oh my God, how many times does she have to be asked before we’re like –

CAMEROTA: At least one more, today.

BERMAN: Okay, well there you go.

ALISYN CAMEROTA: Former First Lady Michelle Obama getting a rock star reception as she promotes her memoir, “Becoming.” This week in Washington, a special guest made an appearance on stage.

All right, joining us now is former Obama senior adviser Valerie Jarrett. She was also on stage there. She was the moderator Saturday night there with the Obamas.

CAMEROTA: And so, Valerie, that leads to, of course, the $64,000 question. You know, lots of people are wondering if Michelle Obama herself is considering some public service, if she would run for President ever, or office. Where is she on that?

VALERIE JARRETT: Let me be very clear: it will never happen. She has committed her life to public service, and she’s gonna use her incredible platform to be a force for good, but not in politics. You can bank on that.

JARRETT: No, no, let me just be abundantly clear with you, or else I have to go home and face her. No. It will not happen.