On March 5, former Trump campaign aide Sam Nunberg made the rounds on cable news, giving two interviews to MSNBC and three to CNN throughout the afternoon and evening. During these appearances (both phone calls and in-person), Nunberg revealed that he did not intend to honor a subpoena he had been served by Special Counsel Robert Mueller demanding that he turn over his e-mails with key Trump campaign associates. He also speculated that Mueller “may” have something on Donald Trump – a revelation that the cable hosts were sure to remind viewers of repeatedly.

Newsbusters examined all cable news shows that aired between 3:30 and 11:00 p.m. Eastern, starting after the daily White House press briefing concluded. Between interviews and panel-style conversations, both networks dedicated more than half of their news coverage to Nunberg within the specified period of time. Not surprisingly, CNN came out ahead in this regard, dedicating 73.3 percent (230 minutes) of its total news coverage to Nunberg, compared to MSNBC's 56.7 percent (196 minutes). 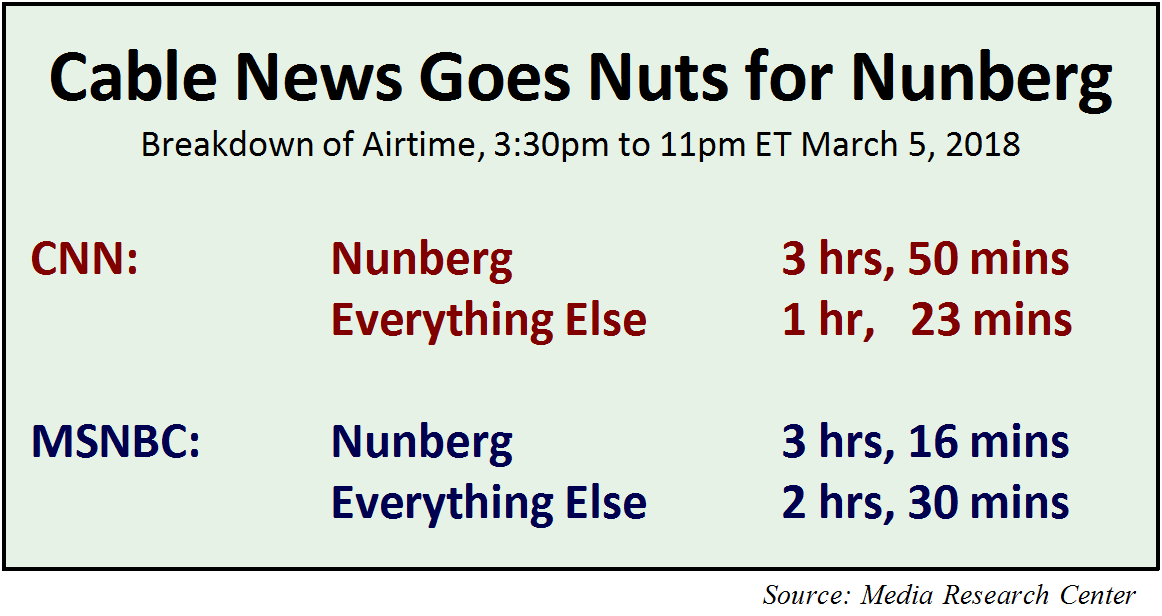 This disparity was a result of two factors: the time allotted for other stories, and the amount of time taken up by commercials. The two networks differed somewhat in both categories. During the specified time, CNN spent only 83 minutes on stories other than Nunberg, compared to MSNBC’s 150 minutes. Additionally, CNN ran 313 minutes (69.6%) of news coverage, while MSNBC’s reporting comprised 346 minutes (76.9%).

Neither network aired a show without at least one full segment dedicated to the Nunberg story. MSNBC’s All In With Chris Hayes and The Rachel Maddow Show were the only two shows to dedicate more than fifty percent of their total runtime to other topics. CNN’s Erin Burnett OutFront spent over 99 percent of its apportioned hour on Nunberg. While this figure was due in part to the former Trump aide’s appearance with Burnett, every other show to feature an interview with Nunberg managed to squeeze in at least one segment about some other story.

It is worth mentioning that although Burnett was put off by Nunberg’s demeanor – at one point even asking him if he’d been drinking – she still saw fit to spend virtually the entire hour on him.

CNN’s talent were so consumed by speculation that between 3:30 and 11:00 p.m., commercials took up more time than coverage of anything not pertaining to Nunberg (137 minutes vs 83 minutes).