In the days and months leading up to the 2016 election, the Obama administration was well aware of Russia’s attempts to meddle in the process, but it’s arguable that they didn't do much to stop it. Still, this didn't deter Alyssa Mastromonaco, the former Deputy Chief of Staff for Operations for the Obama White House, from claiming she found it "really sad" that President Trump hadn't done more about Russia.

Mastromonaco said as much while on the set of MSNBC's Deadline: White House, where she and host Nicolle Wallace fed off of each other's frustrations with the Trump White House's dismissive attitude toward Russia.

Wallace, not one to mince words about the President, is usually uncontested as the show's primary purveyor of melodramatic (and at times oddly specific) sanctimony. On Tuesday, however, Mastromonaco evidently was determined to stand toe-to-toe with Wallace. Angered that Trump had targeted former President Obama in a recent tweet storm, she argued that Obama's prior perceived inaction was no excuse for further passivity:

It's your bag. Pick it up, you know? Does that mean that now he doesn't have to do anything? So, I mean, for most of us, I just think it's really sad to see someone who literally is constitutionally incapable of being a President and leading. And if he really did care about what Russia did, why didn't he start a commission? Start a commission.

Readers may be scratching their heads and wondering what Mastromonaco specifically believed the President had done which would render him “constitutionally incapable” of remaining in office. Fortunately, she has provided a clue in a recent tweet pertaining to the Constitution: 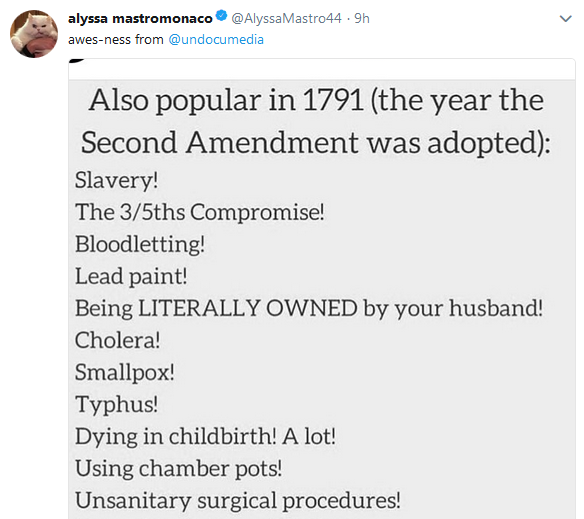 Perhaps Mastromonaco overlooked the fact that the 2nd Amendment was passed concurrently with the other nine Amendments comprising the Bill of Rights. But if not, would it be unfair to assume that she considered the right to free speech and freedom from unlawful search and seizure as outdated as chamber pots?

Additionally, the assertion that typhus and dying during childbirth could ever have been described as "popular" raises some flags. Note that Mastromonaco did not create the above list, and that labeling it "awes-ness" is not necessarily an endorsement of its contents. But it might be.

She continued onto the topic of Russian social media activity during the 2016 election, which she felt the Trump administration was not taking seriously. "It happened, and he just moves on," she complained. "And so, well, that's sad." Nicolle Wallace was in full agreement: "And there's no aide that's immune from being attacked by the President on Twitter," she added. "As someone who worked at the highest levels of a White House, how outside the norm is that?" 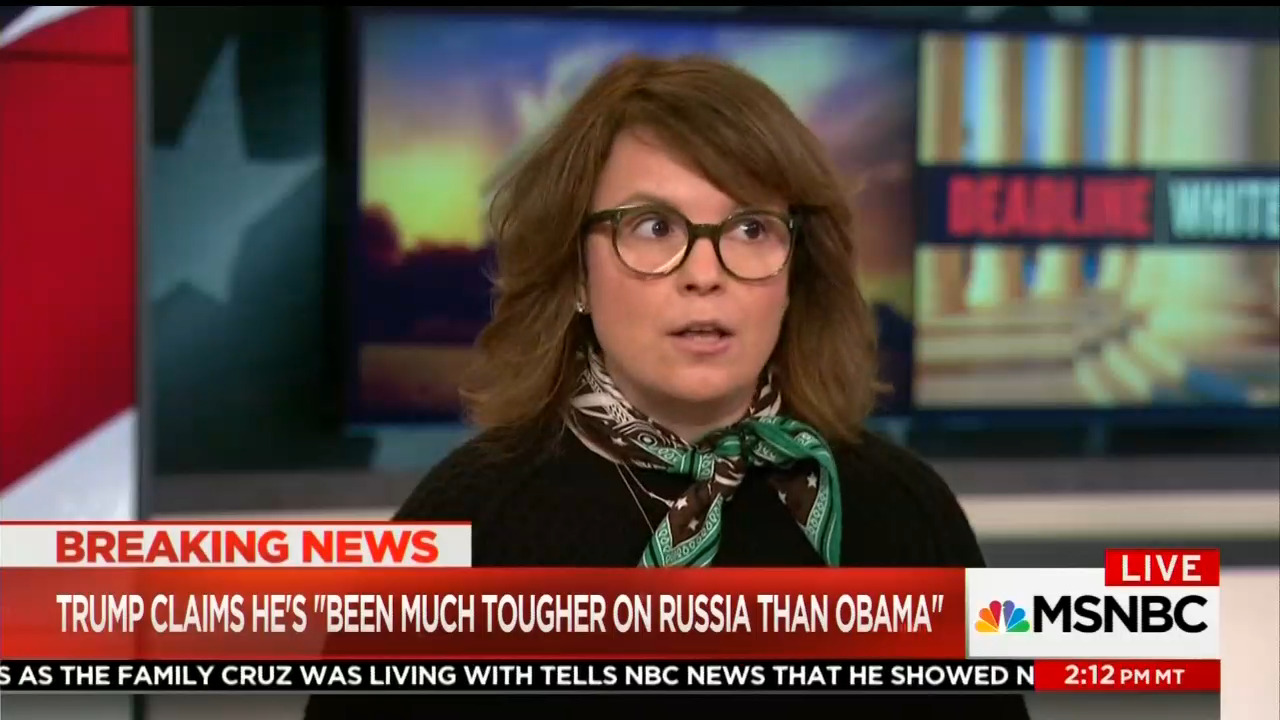 "It's so outside the norm, I don't understand why people actually continue to work there," Mastromonaco exclaimed. She then characterized the President as a "tank" that could only go forward: "He's going to mow over all of them. They're all going to leave the building with no credibility and complete reputational damage."

Mastromonaco also noted that the only two people who seemed off-limits for the President to criticize were his daughter and son-in-law, Ivanka and Jared Kushner. Wallace later probed her guest for her thoughts on Kushner's freedom to read the President's Daily Brief, a highly classified Intelligence document that would not normally be available to a staffer with only temporary security clearance. Mastromonaco was rendered nearly speechless by this revelation:

For him it's, like -- and also the additional protocols that, like -- if you've had an interim clearance since June, then you're going to be kicked out. Like, it just -- one size doesn't fit all at the stage that they're in.

The New Republic magazine once named Alyssa Mastromonaco in a 2011 article titled "Washington's Most Powerful, Least Famous People." Considering the media's propensity for shining a spotlight on the particularly problematic and embarrassing members of the Trump administration, one wonders whether her minimal public profile during the Obama years was merely an oversight on their part.