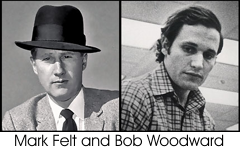 A new book about former FBI Agent Mark Felt, the alleged "Deep Throat" of "All the President's Men" (Watergate) fame, says Felt believes journalist Bob Woodward violated an agreement not to describe him in print.

A Washington Post story by Lynn Duke about the new book "A G-Man's Life: The FBI, 'Deep Throat' and the Struggle for Honor in Washington," by Mark Felt and John O'Connor, leads with the information that Felt's late wife, Audrey Robinson Felt, committed suicide in 1984.

By paragraph four, however, the article reveals something entirely different:

...And the book tells of Felt's deep anger at what he believed was Woodward's violation of their source-reporter relationship. Felt did not want to be described in any way in print, but Woodward both described him and called him "Deep Throat" in 1974 in "All the President's Men."

"Mark has never seen himself as a chatterbox who gave up secrets," writes O'Connor in a lengthy introduction.

"If this book does nothing else, let it destroy that caricature. Deep Throat was a journalistic joke; the name never described Mark Felt. After Woodward revealed that he had a senior source in the executive branch, thereby breaking his agreement with Mark Felt, and after the journalist identified his confidant as 'Deep Throat,' the retired FBI man was furious -- slamming down the phone when Woodward called for his reaction" to the 1974 book.

In "The Secret Man," Woodward's 2005 book on Felt's outing as Deep Throat, Woodward also describes Felt's anger at "All the President's Men." Felt had wanted their agreement to be "inviolate," Woodward wrote. But Woodward wrote that he thought he had "some leeway" because Felt had not previously objected to Woodward's other published references to the secret source...

To me, this raises a question. If the newspaper with the #1 reputation (deserved or otherwise is another question) for investigative journalism chose not to honor a confidentiality agreement with the most famous confidential source in all history, should the public really believe journalists take the "confidential source" issue seriously? And if journalists don't, why do proponents of a federal shield law think the law should?
Political Scandals Washington Post Government & Press