Borrowing the phraseology of left-wing bloggers, NBC Justice correspondent Pete Williams has (so far) thrice invoked Nazi terminology to describe SB-1070, the Arizona immigration law that continues to be the object of liberal scorn.

The first reference occurred today during the 10 a.m. EDT hour of "Jansing & Co.," when Williams called the state measure the "show us your papers law."

Moments later, Williams led the top of 11 a.m. EDT hour of "MSNBC Live" by repeating the "show us your papers" line.

The NBC correspondent took a break for about an hour before rephrasing the legislation during the 12 p.m. EDT hour as the "round up the usual suspects law." 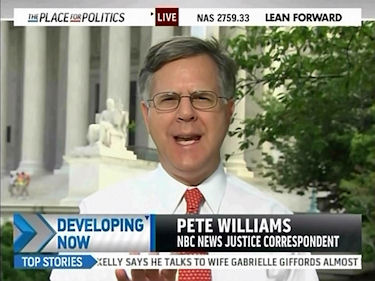 In using police-state nomenclature, Williams joins an exclusive club of liberal bloggers whose cognitive abilities are limited to comparing the Republican Party to the Third Reich:

On the ACLU of Nevada's site, the liberal attorneys employ esoteric legalese that would send Justice Scalia scrambling for the nearest thesaurus: "Arizona's 'show me your papers' law dealt a stunning blow."

Over at Firedoglake, one blogger triumphantly trumpets: "Obama DOJ files suit against Arizona’s 'show me your papers' law today."

With the rest of the day ahead of him, Williams has plenty of time to think of fun, new ways to repackage his Nazi propaganda.