Two US airmen were killed by a Muslim terrorist in Germany yesterday, but neither CBS nor NBC thought it worthy of more than 30 seconds of coverage on their evening newscasts Wednesday night.

While ABC devoted a full segment of the March 2 "World News" to the issue, the CBS "Evening News" and the NBC "Nightly News" offered only scant news briefs and buried the story deep into their broadcasts.

"Troops under attack in Germany, targeted by a gunman shouting in Arabic about jihad," intoned ABC anchor Diane Sawyer, introducing the segment. 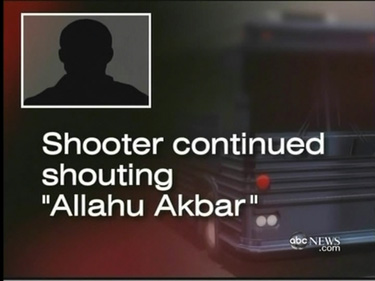 In their brief reports, neither CBS nor NBC mentioned that the suspected gunman uttered "jihad, jihad" during his fatal rampage.

On the other hand, Martha Raddatz, ABC senior foreign affairs correspondent, reported that the alleged gunman, Arid Uka, opened fire on a bus carrying US airmen at a German airport, killing two and injuring two more while screaming God is great in Arabic and chanting "jihad, jihad."

In contrast to the ABC report, which appeared toward the top of the broadcast, NBC anchor Brian Williams and CBS anchor Katie Couric spent less than 30 seconds each discussing the tragic act of terror and stuffed it between other news briefs near the middle of the broadcast.

The following is Williams's news brief, which occurred more than 10 minutes into the broadcast:

Two members of the US Air Force, on their way to Afghanistan, were killed. Two others badly injured today, when a gunman opened fire on a US military bus at the airport in Frankfurt, Germany. A 21-year-old man was arrested at the scene. Relatives said he is a German Muslim who worked at the airport. German police aren't ready to call this an act of terrorism but they so far aren't ruling it out either.

Couric's coverage, which was also presented roughly 10 minutes into the half-hour broadcast, was similarly terse:

In other news, 13 U.S. airmen headed to Afghanistan came under attack today in Germany. They were on a shuttle bus at the Frankfurt Airport when a gunman opened fire. Two of the Americans were killed, two others wounded. German police arrested an airport employee, 21-year-old Arid Uka. His family describes him as a devout Muslim. The police say he had argued with the airmen just before the shooting.

A full transcript of ABC's coverage can be found below:

DIANE SAWYER: And now, what happened today to American Air Force. Troops under attack in Germany, targeted by a gunman shouting in Arabic about jihad. President Obama vowed to get justice. Here's Martha Raddatz.

MARTHA RADDATZ, ABC senior foreign affairs correspondent: The Air Force bus was parked just outside the international terminals. On board, at least a dozen US Air Force security personnel who arrived from England on their way to a US. base in Germany. According to law enforcement officials, the gunman walked up to the bus, pulled out a semi-automatic weapon and began firing again and again, all the while, shouting "Allahu Akbar, Allahu Akbar," Arabic for God is great. Two airmen were killed, including a driver, and two more critically injured, when after nine rounds, the gun jammed. Some of the surviving airmen grabbed the shooter as he continued shouting "Allahu Akbar" and "jihad, jihad." A German police officer then took the man into custody.

BARACK OBAMA, president of the United States: I'm saddened and outraged by this attack. I want everybody to understand that we will spare no effort in learning how this outrageous act took place.

RADDATZ: Law enforcement officials say the shooter is 21-year-old Arid Uka, whose parents moved to Germany decades ago from Kosovo. An uncle told the Associated Press he is a devout Muslim who worked at the Frankfurt Airport. Security had been beefed up at the airport after an informant said a group linked to al-Qaeda was planning to gun down civilians in a public place. The FBI is still looking into this shooter's background or to see if there was a larger plot. But Diane, thus far, they have no indications of that.

SAWYER: All right, Martha, thanks tonight.