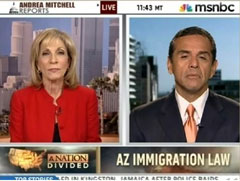 Despite the latest NBC/MSNBC/Telemundo poll showing 61 percent of Americans support Arizona’s new immigration law, MSNBC anchor Andrea Mitchell on May 26 failed to interview a single supporter for MSNBC’s special, “A Nation Divided.” She did, however, manage to scrounge up plenty of vocal opponents, including two high-profile Democrats who believe the law is unconstitutional.

“But the fact of the matter is this is a divisive measure, it’s unconstitutional,” insisted Villaraigosa, who supports the Los Angeles City Council’s decision to boycott Arizona. “It violates the rights of people in Arizona and it’s the wrong way to go.”

Instead of asking Richardson and Villaraigosa to explain how the new law is unconstitutional and divisive, Mitchell fired off bursts of piercing, penetrating questions, such as:

The timing of MSNBC’s special on immigration reform is impeccable. As liberal immigration groups struggle to convince lawmakers to pass an immigration overhaul before the August recess, the American people are focused on jobs and the economy. What better way to divert the public’s attention and rally support for immigration reform than to create a cable television special?

A transcript of the relevant portions of the program can be found below:

ANDREA MITCHELL: Our network-wide special, “A Nation Divided,”focuses today on immigration, the issues facing our country. And here in Los Angeles, the city council voted 13 to 1 to boycott Arizona for its tough immigration law. Here with me now, Los Angeles Mayor Antonio Villaraigosa, a strong supporter of that boycott. Thanks so much, Mr. Mayor. Talk to me about the emotion here, the anger in California among your constituents against what Arizona is doing next door.

ANTONIO VILLARAIGOSA, mayor of Los Angeles: Look, I think people in Los Angeles and in California agree with people all across the country that the immigration system is broken as you’ve just chronicled in your piece a few minutes ago. The fact is we do need to secure our borders, both borders, both the Mexican border and the Canadian border. The fact is, every country has a right to enforce its laws and we have to respect the rule of law. But the fact of the matter is this is a divisive measure, it’s unconstitutional. It violates the rights of people in Arizona and it’s the wrong way to go. You said it, we need to unite our country, not divide our country on the issue of race or ethnicity or immigration and this initiative, legislation rather, just divides us and polarizes us on this issue.

MITCHELL: Can’t there be some repercussions though? There have been threats from Arizona that they’re going to cut of power supplies to you. How are you going to deal with retaliation, potentially, from the Arizona side of the border?

VILLARAIGOSA: Well, actually, when queried by the press about their ability to do so they agreed they can’t in any way abrogate those contracts we have with the utility companies there. The fact is rather than point fingers we need to work together. We believe here in Los Angeles and I believe cities all across the country believe this law is the wrong way to go. But the reason they passed this legislation is because the federal government has refused to act. And I know President Obama met yesterday with the Senate Republicans, urging them to support comprehensive immigration reform that is bipartisan in nature. The House would like to see the Senate go first because historically the Senate has been more resistant on these issues. My hope is the Senate Republicans will heed the call of President Obama and move forward with comprehensive, fair immigration laws that secure our borders but also give people a pathway to citizenship.

VILLARAIGOSA: Well, first of all, immigration into this country, illegal immigration is down substantially. All of the authorities will confirm that. The fact is, while I understand that the president may be sending these troops, he's made it clear that they're not there for the purpose of apprehending people, but to focus on arms and drug smuggling. And my hope is that the Republicans will realize that this administration has been tough on the border. It’s time now that we also be compassionate and smart. You know, it's great to talk tough about immigration. But if you want sensible immigration law, it's not just talking tough. You've got to be fair. You've got to be smart. You've got to deal with the root causes. We've got to give people a pathway for citizenship. We've got to invest in the states that are sending us most of their immigrants. As President Calderon said, they have a stake in this. They have to work with us as well. They acknowledge that. We all have to work together. You know, many people talk about walls. What we need is bridges. We need bridges to Mexico and Canada. We need to work on our commonalities–on the common border and future that we share with one another.

MITCHELL: Los Angeles Mayor, Antonio Villaraigosa, thank you very much. Thanks for joining us. Thanks for the hospitality here in Los Angeles, and we appreciate it.

MITCHELL: And as we continue our day-long look at immigration, New Mexico Governor Bill Richardson joins me now. Governor Richardson, good to see you. Thanks so much. Let's talk about the different approaches with New Mexico and Arizona. You've been very critical of Arizona's law, a completely different approach in New Mexico. Why is Arizona wrong for what it's facing on its border?

BILL RICHARDSON, Governor of New Mexico: Well, because Arizona cannot take a federal law and make it their own. I think what is needed is more border enforcement and I think the president sending 1,200 new border patrol, National Guard is going to help immensely. I think what we need is comprehensive immigration reform. Our attitude, though, in New Mexico has been with our undocumented workers there you integrate them. You let them apply for scholarships, the kids. You let them get driver's licenses. That's helped our safety records, our uninsured numbers. At the same time, I've been very tough in increasing border security from our own state funds. We paid for more national guard in this last period, a month ago, when they killed that rancher. So our approaches are different. In New Mexico we have a sensible policy. We don't have an overridden number of illegals coming in or at the same time more drugs. We do have that problem. But what is needed is a national, comprehensive act. Crack down on illegal hires and earn legalization and increase border patrol as the president sent us recently.

MITCHELL: Well John McCain says he is underwhelmed by the president's approach that in fact they need 6,000 new people on the border, not 1,200.

RICHARDSON: Well, 1,200 is a start. The problem is it's the Congress that needs to approve and appropriate the funds for these 6,000 or whatever it is that we need. Look, there are four states on the border. I need more. Arizona needs more. But you have to have a federal law to appropriate more money. The president is doing this 1,200 with existing funds. And we commend him and we thank him. But you can't just enforce the border to resolve the problem. You need a legalization plan, Andrea, where these people that are here, they should pay taxes, speak English, pay a fine for being here illegally, be part of the community, get in the back of the line, pass a background check, and then you give them status. You don't give them citizenship but you're not going to deport 12 million people, so the answer is in Washington where you need a comprehensive immigration act. The Congress is afraid to act for political reasons. And those of us on the border and in other states that have an undocumented worker problem are suffering because of congressional inaction.

MITCHELL: One of the striking things in our new NBC News and Telemundo poll shows that 65% of Americans believe that there should be a path to citizenship. 32% oppose. That is striking. That would seem to indicate that there is some basis for working on immigration reform but as Chuck Todd was just reporting when you break it down and test how strongly people feel about this, that's where the pollsters say it all begins to break down and opens up a lot of possibilities for political mischief making and for failure to reach consensus.

RICHARDSON: Well, the American people are basically very fair. But if you do say you're going to give them automatic citizenship or amnesty, that's not good. I'm not for that. But if there's a path to citizenship where there are these conditions, where they pay back taxes, they learn English, pay a fine for coming here legally, get at the back of the line, pass a background check, I think the American people are willing to integrate those that are already here, that are working, that are law abiding and those that don't qualify you move them out. But you can't just enforce the border. You have to deal with the 12 million that are here. That's why you have unrest like exists in Arizona. I think president Obama is to be commended for talking frankly to Senate Republicans yesterday, asking them to help for bipartisanship, maybe getting one or two or three that would work with Democrats for a comprehensive immigration bill this year, which is needed.

MITCHELL: Well, it sounds as though that meeting was frank and not entirely happy but to be continued. It’s great to see you again. Thanks very much, governor.