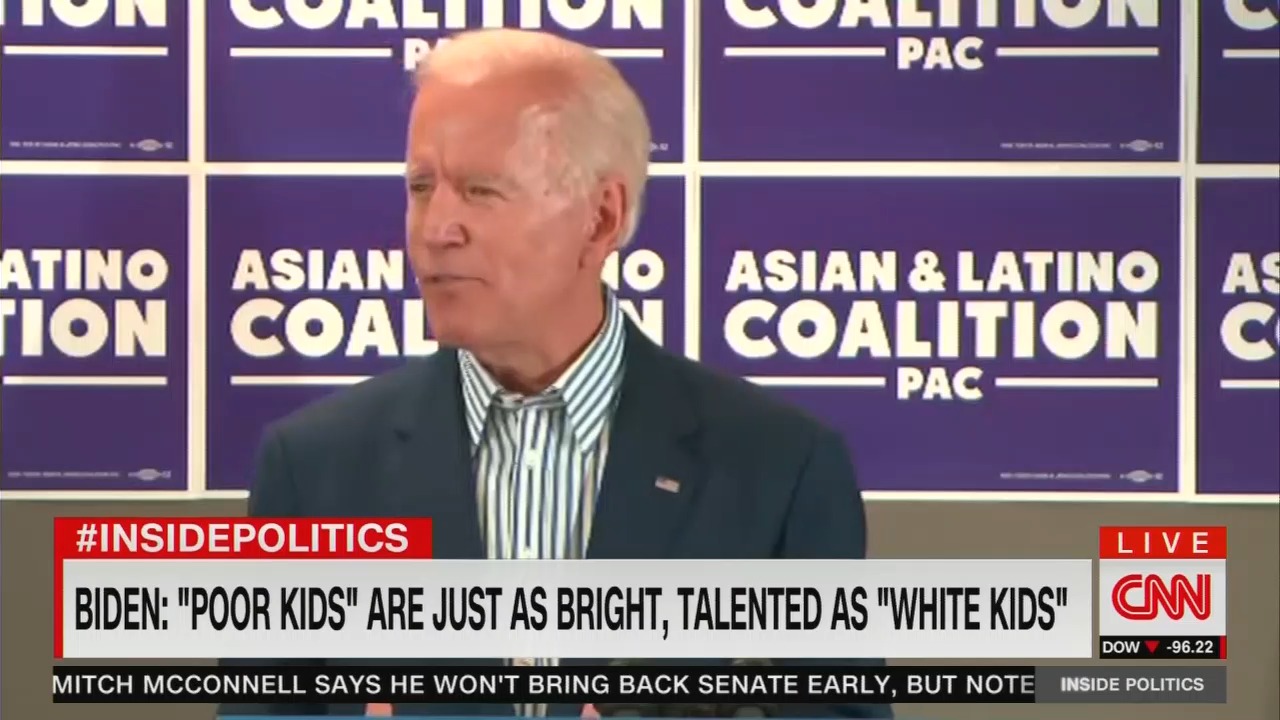 Another day, another Joe Biden gaffe, another story framed as "Republicans Pounce" or "Republicans Seize." That's how CNN Inside Politics guest host Nia-Malika Henderson framed the story of the former Vice President's Thursday gaffe where he said that, "Poor kids are just as bright as just as talented as white kids" before immediately correcting himself, "wealthy kids, black kids, Asian kids."

Henderson's framing was apparent from the moment the show returned from commercial, "Critics are pouncing on Joe Biden after an apparent slip-up last night." After playing a clip of the gaffe, Henderson again hyped the reaction angle, "Critics, including the Trump campaign, are seizing that slight pause there before Biden edits himself." After playing a clip of Trump's reaction, Henderson went to the panel for discussion.

Annie Linskey of the Washington Post took a different angle than Henderson, arguing Biden needs to be careful because he is going to get more tired as the campaign goes along and this gaffe was race-related, because race "a very difficult
issue for him." Catherine Lucey of The Wall Street Journal agreed that the Trump campaign is going to "jump" on any Biden gaffe, but still agreed with Linskey that the Biden campaign needs to be wary of Biden's tendency to put his foot in his mouth.

CNN Congressional correspondent Manu Raju sided more with his CNN colleague, "The president has the benefit of being graded too on a curve because he makes misstatements and false statements, he lies at a fairly regular basis. He's called Dayton, Toledo this week while he was trying to comfort the nation after the massacres this weekend." The panel then pointed out to Raju that Biden also confused Houston for El Paso and Michigan for Ohio.

Politico's John Bresnahan then pointed that crazy Uncle Joe has a history saying, well, crazy things: "[H]e always said stupid things, he's got a history, because he likes to talk. He thinks as he's talking and that's where you get in trouble." The segment ended with Linskey again arguing that this continues to happen, it may pose a bigger problem for Biden than conventional wisdom might say.

Henderson and Raju's statements show the problem with Biden versus Trump coverage. Biden made a gaffe and there was almost certainly no racial malice intended, Trump himself didn't call Biden a racist, instead choosing to troll Biden's lack of competence.

If Trump said what Biden said we would be treated to a week's worth of coverage about how the President's Freudian slip reveled his true character. There weren't many "Democrats pounced" when Trump went after "The Squad," but Biden's comments will never be tied to his 7-Eleven comments for example, nor will his character be questioned by the press, nor will his supporters be held responsible for every dumb thing he ever says. He's just crazy Uncle Joe.

Here is a transcript for the August 9 show:

NIA-MALIKA HENDERSON: Critics are pouncing on Joe Biden after an apparent slip-up last night of the former vice president was speaking about education to voters in Iowa when he said this.

JOE BIDEN: We have this notion that somehow if you're poor, you cannot do it. Poor kids are just as bright as just as talented as white kids, wealthy kids, black kids, Asian kids. I really mean it. Think how we think about it. We think now we're going to dumb it down. They can do anything anybody else can do given a shot.


HENDERSON: Critics, including the Trump campaign, are seizing that slight pause there before Biden edits himself and the Biden campaign working to clear this whole thing up today. The campaign released this statement, quote “Donald Trump is desperate to change the subject from his atrocious record of using racism to divide this country. Vice President Biden misspoke and immediately corrected himself during a refrain he often uses to make the point that all children deserve a fair shot, and children born into lower-income circumstances are just as smart as those born to wealthy parents.” Despite the explanation, President Trump was still eager to pile on.

DONALD TRUMP: He made that comment. I said, whoa, I saw it because I was on something. I had a television. I saw his comment. Joe Biden is not playing with a full deck. This is not somebody you can have as your president. But if he got the nomination, I'd be thrilled.

HENDERSON: And Annie, Joe Biden known for his gaffes. Was this a gaffe? Was it a misstatement? He obviously corrected right away but this is the Joe Biden you're going to get.

ANNIE LINSKEY: This is the Joe Biden you're going to get. He's going to get more tired, he's going to have more appearances. One of the issues here is that this is getting to race. Joe Biden has a huge support with African-Americans right now. But we've done interviews with a number of black voters in early states and that support is wide but it's not that deep. I think the more -- this kind of comment, comments he made earlier where he was talking about his working relationship with segregationists, they're going to start piling up and I think this is a very difficult
issue for him and absolutely is a gaffe.

HENDERSON: Yeah Catherine, you had the Trump re-election campaign seize on this. Andrew Clark, who’s the rapid response director, he tweeted an edited video of Biden’s comments with the line, “yikes have fun mitigating that one.” So, they see some sort of opportunity

CATHERINE LUCEY: They're going to jump on any examples like this to drive this narrative that he's gaffe-prone, that he's not prepared and of course to Annie's point, the campaign is only accelerating. We’re going to see him, I mean he's doing multiple events in Iowa. He's going to be very busy in the coming weeks and this comes at a moment where he continues to be the leader in the polls, but other candidates are really moving up as we see polls in these early states and that lead is not -- it's not unchangeable. So he's under pressure here.

MANU RAJU: The president has the benefit of being graded too on a curve because he makes misstatements and false statements, he lies at a fairly regular basis. He's called Dayton Toledo this week while he was trying to comfort the nation after the massacres this weekend. So how it plays out in a general election remains to be seen. But of course, Biden's rivals will make the point that he could say something at any given time that could change the narrative and you need someone to prosecute an effective argument against the president.

LINSKEY: Too your point, Biden did call Ohio, Michigan too.

LUCEY: Which the trump campaign also made note of.

JOHN BRESNAHAN: The other point is If you've covered Biden for a long time, and I have, he always said stupid things, he's got a history, because he likes to talk. He thinks as he's talking and that's where you get in trouble.

HENDERSON: And that’s what we’re going to see for the next month here he's got this very busy schedule in September, so we'll see where this goes. We'll see if some of his support ends up kind of crumbling. We've seen him steady in the polls so far, Annie.

LINSKEY: Well, this gaffe, again, I say it goes to race. That's what makes it particularly dangerous. It's one thing to be Uncle Joe and sort of misspeak, but when he’s talking about race, that is where his support comes from, black voters.