It was no contest really.

For the 2014 "Damn Those Conservatives to Hell" DisHonors Award, the winner, with some 83 percent of the Media Research Center Gala audience vote, was MSNBCer Martin Bashir, who infamously expressed the wish on national television -- if MSNBC can count as that -- that former Gov. Sarah Palin might be subject to someone defecating down her mouth.

For all the wild-eyed, hateful things fellow DisHonor finalists MSNBC's Chris Matthews and former CNNer Bill Press have spewed about conservatives, we think nothing has come close to the disturbing fantasy of scatological torture that oozed from mouth of Mr. Bashir last November. 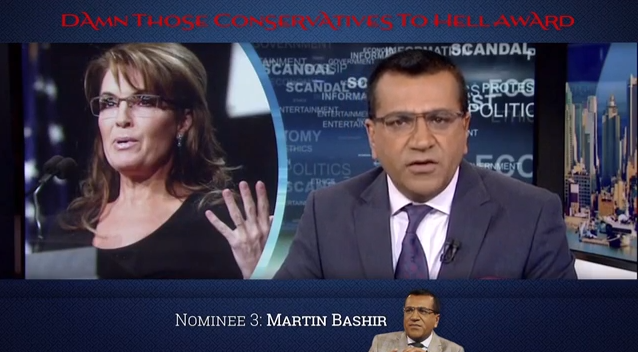