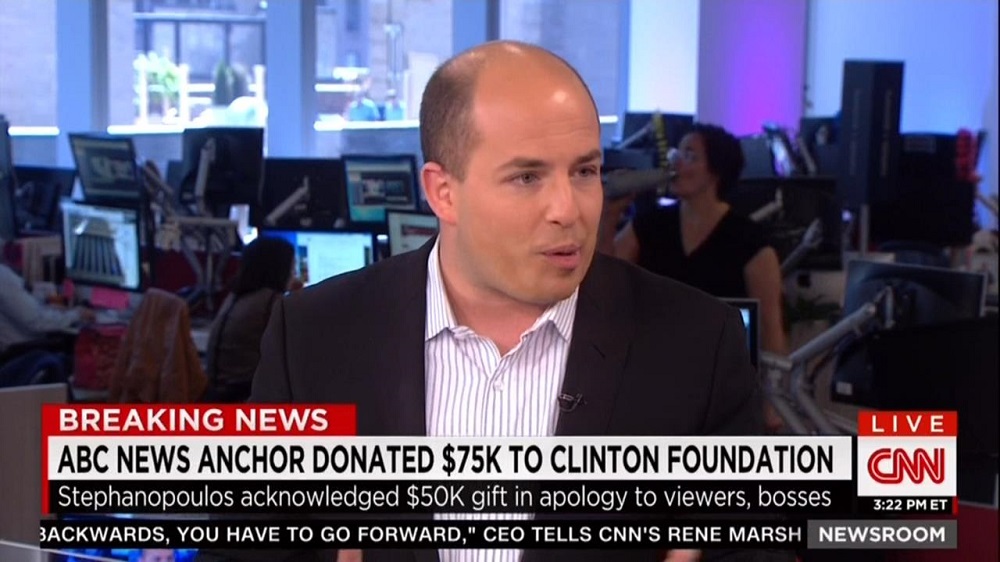 On Thursday's CNN Newsroom, Brian Stelter asserted that George Stephanopoulos is "one of the biggest stars on all of television," as he reported on the ABC anchor's $75,000 in donations to the Clinton Foundation. Stelter later claimed that Stephanopoulos has "done a lot to earn people's respect and trust. He's one of the most well-respected anchors at ABC." During his report, the correspondent never mentioned the recently-revealed issues surrounding the Clinton Foundation. [video below]

CNN anchor Brooke Baldwin led into Stelter's report with the "breaking news now here regarding donations that ABC News anchor George Stephanopoulos has admitted to making to the Clinton Foundation." Baldwin then turned to the her network's senior media correspondent, and asked him to reveal what he found out in his conversation with the ABC journalist. Stelter first pointed out that "journalists generally do not give money to political candidates or campaigns. But the Clinton Foundation is, kind of, one of a kind. It's a charitable organization, but run by a former president and a possible future president – a candidate for president. So, it is something that is very unique."

The CNN reporter continued by outlining Stephanopoulos's donations, and included his "biggest stars" and " most well-respected" labels of the ABC anchor:

BRIAN STELTER: ...It was discovered by reporters – overnight apparently – and then, revealed this morning – that Stephanopoulos had donated $25,000 last year, and $25,000 the year before that to the Foundation. This raised a lot of eyebrows. So immediately, Stephanopoulos apologized; and ABC said, yeah, he made a mistake, but we're going to stand by him – it's okay.

You know, Stephanopoulos – one of the biggest stars on all of television-

STELTER: And, of course, twenty years ago, he was one of the Bill Clinton's closest advisers. So Republicans – some conservatives – have always been somewhat skeptical of him – always wondered if he could be fair when covering politics. But, you know, he's done a lot to earn people's respect and trust. He's one of the most well-respected anchors at ABC – also, one of the best paid. So he donates millions of dollars to charities. He happens to give to the Clinton Foundation as well.

BALDWIN: So he's donated – you mentioned the two times. So he's discovered a third time?

STELTER: And then, he discovered a third, so that's what happened in the last hour. So he came out and said, actually, I also gave another time back in 2012. I forgot about it, but it's in the record. So actually, it's a grand total of $75,000 – which is not a small amount of money.

Stelter then read Stephanopoulos's statement from regarding the issue, and noted how several prominent Republicans have objected to the former Clinton aide covering the 2016 Republican presidential race:

STELTER: People are automatically and immediately wondering, was this some sort of quid pro quo? Do you give this money in order to get access to the Clintons?

Stephanopoulos just told me, absolutely not. In fact, we got – I think we can put on the screen what he just said to me. He said, 'I gave the donations for all the right reasons, for the best of intentions'-

BALDWIN: There you go-

STELTER: 'To support causes I believe in. In retrospect, though, I realize' – and then, he went on to say – 'I should have gone above and beyond that, just to avoid anything that would even raise any possible appearance of a conflict.' In other words, he's saying he should have disclosed this. He shouldn't have done this. And then, he concluded by saying, 'That's why it was a mistake, and that's why I'm sorry to our viewers and to my colleagues'....He's actually going to address this on air on Sunday. This is how seriously he's taking it-

BALDWIN: On Sunday – I mean, obviously, he covers politics intensely. How will this affect covering – I don't know – whether it's moderating debates-

STELTER: Right. Well, that was the first question this morning: can he moderate a Republican presidential primary debate? Behind the scenes, there was immediate pressure from some candidates. And some campaigns are saying, no – he cannot be on stage moderating a debate. We saw Rand Paul say that earlier today. And we actually saw Mike Lee's communication director – Senator Mike Lee's communication director say, we're not going to put Mike Lee on ABC until Stephanopoulos recuses himself from all campaign coverage.

Stephanopoulos is going halfway here. He's told me, in the last few minutes, he will not moderate ABC's February presidential primary debate. He said to me, I just don't want to be a distraction, so I'm not going to moderate that debate. But he said, I am going to continue to cover the campaign. And that now becomes this issue that's out there among some Republican presidential candidates. They may or may not want to play ball with ABC if Stephanopoulos is seen as being tainted.

This just goes to show – you know, journalists are held to a very high standard. Even someone who believes he's doing the right thing by donating to charity can sometimes find himself in a whole world of trouble.