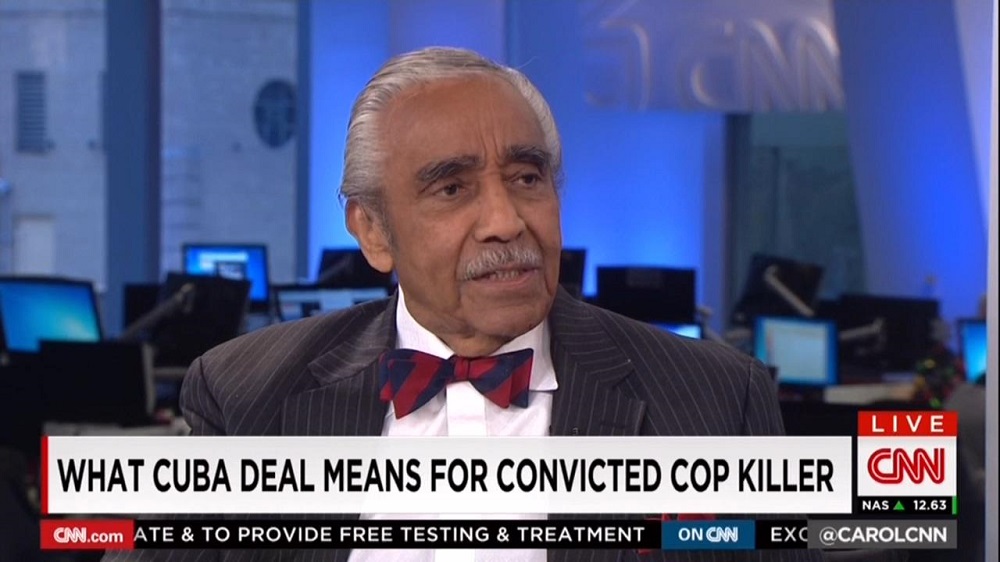 On Friday's CNN Newsroom, liberal Rep. Charlie Rangel completely downplayed how the communist regime in Cuba has harbored a fugitive cop-killer for decades. Anchor Carol Costello raised how Joanne Chesimard, who was named to the FBI's Most Wanted Terrorist List in 2013, was "granted asylum by Fidel Castro." Rangel replied, "I haven't heard her name come up in decades," and asserted that on the "radar screen" of "what's in the best interest of the people of the United States from a foreign policy point of view...her name doesn't even come up."

To her credit, Costello hounded the New York City congressman on the Chesimard issue: "There are people who will look at this and say, look, Fidel Castro and Cuba harbored a cop killer, who should be in prison in the United States. Why are we gifting them with more normalized relations?" [video below]

The anchor led into the Rangel interview by outlining the circumstances of the convicted murderer's case:

CAROL COSTELLO: That landmark deal could mean more than just changes to travel restrictions and economic sanctions. It could also mean that one of America's most-wanted fugitives could return to the United States. You're looking at Joanne Chesimard. She's wanted in the killing of a New Jersey state trooper back in 1973. The former Black Panther member was convicted of first-degree murder in the United States, but she later escaped from prison, and fled to Cuba – where she was granted asylum by Fidel Castro. Last year, Chesimard, who now goes by the name 'Assata Shakur,' became the first woman on the FBI's Most Wanted Terrorist List.

She first asked the Democratic politician, "So, I'm sure the FBI wants Joanne Chesimard brought back to the United States. Do you think that extradition is possible?" Rangel responded by dismissing the issue, and singing the praises of President Obama for his Cuba move. This led to the CNN journalist pressing the matter for much of the segment:

REP. CHARLES RANGEL, (D), NEW YORK: It's remotely possible. You know, we're fighting a war of terrorism, and I have no idea what priority she would have. I know she's wanted by the State of New Jersey. But it's abundantly clear that this is an international appreciation of a country. It's one of the greatest things that's happened in recent history. The people of Cuba and the people of Cuba love each other – notwithstanding our serious government conflicts.

COSTELLO: But there are people who will look at this and say, look, Fidel Castro and Cuba harbored a cop killer, who should be in prison in the United States. Why are we gifting them with more normalized relations?

RANGEL: Well, quite frankly, I haven't heard her name come up in decades – nor did we even know about the Cuban spy that – that they had arrested and had been holding for 20 years. And so, it's all-

COSTELLO: Well, her – she was on the FBI's most-wanted list, though. So her name has come up.

RANGEL: Well, what we're talking about is what's in the best interest of the people of the United States from a foreign policy point of view. And I think you would agree with me that on that radar screen, her name doesn't even come up.

And so, quite frankly, this is the most historic thing that's happened in this hemisphere. We can talk about really getting at ISIS and terrorists. We can talk about communicating with people who love us and we love them. And before I left Havana last night, a lady grabbed me – and I never felt more proud of being American – and she said, 'Congressman, do you know that there are two reasons why Cubans love America so much?' I said, 'No. What are they?' She says, 'United States movies and all the other great reason.'

Now, you know it has – you have to – you have to feel good about that. And whether in Miami or Havana, you feel like the nation is going forward.

Costello then brought up the Cuban government's deplorable treatment of Alan Gross, who was released hours before the President made his announcement on Cuba. Rep. Rangel brushed off that human rights abuse as well:

COSTELLO: I agree with you. There's many, like, good reasons for normalizing relations, and a lot of people are happy. But a lot of people are conflicted, because of things like this – because of Joanne Chesimard; because of the – the terrible conditions that Alan Gross was kept in for those five years in a Cuban military hospital. He came back in bad shape! He was missing teeth-

RANGEL: Not if you listen to him – he would tell you that he thought it was the policies of Cuba and the United States that caused him to have been there. And no one came back with more – of a support for a friendship normalization. So we're not going to talk about him. This other lady's name – I've been in Congress over 40 years. We've been involved with this over 50 years! You're the first person that has actually brought her name up to me.

And so, there's no question that there are even a lot of older Cubans – some that are located in Florida – that have emotional ties – Senator Rubio and a couple of other politicians. But the President of the United States has to decide what is good for the people of the United States of America, and with all the serious crises that we have, I don't think those voices that are against this policy will get much coverage.

Towards the end of the interview, the anchor raised the possibility of dictator Raul Castro coming to the U.S. The liberal representative made it clear he supported such a move, and continued to cheerlead for the restoration of diplomatic and economic ties between Cuba and the United States:

COSTELLO: Did you meet with Raul Castro while in you were in Cuba?

COSTELLO: Do you think he should be allowed to come to the United States?

RANGEL: Allowed? What are we talking about? The word is 'normalization.'

COSTELLO: Not complete normalization, because we're not there yet – right?

RANGEL: Well, if the people have something to say about it, we will be there. You cannot think of one down side – as it relates to the people of the United States of America and trying to work this out, so that we can exchange information – medical information, which is the reason that I was there; be able to track down drugs; to fight jointly against terrorism; to have our farmers be able to export pork and rice and beans and chickens.

And so, there's – of course you can find something wrong with our relationship with the European Union – with Asia – but this is a great thing this president has overcome, and it can only get better. And in terms of – of trying to see how this dirty communist can be received as a neighbor, and someone that now opens the door for a friendship with us and Mexico, Central America, South America. This unites a whole hemisphere, because we were the only ones excluding Cuba, and all of the reasons we've done it have disappeared.

COSTELLO: Have to leave it there. Congressman Charlie Rangel, thanks so much for coming in. I appreciate it.

RANGEL: Thanks for having me, Carol.