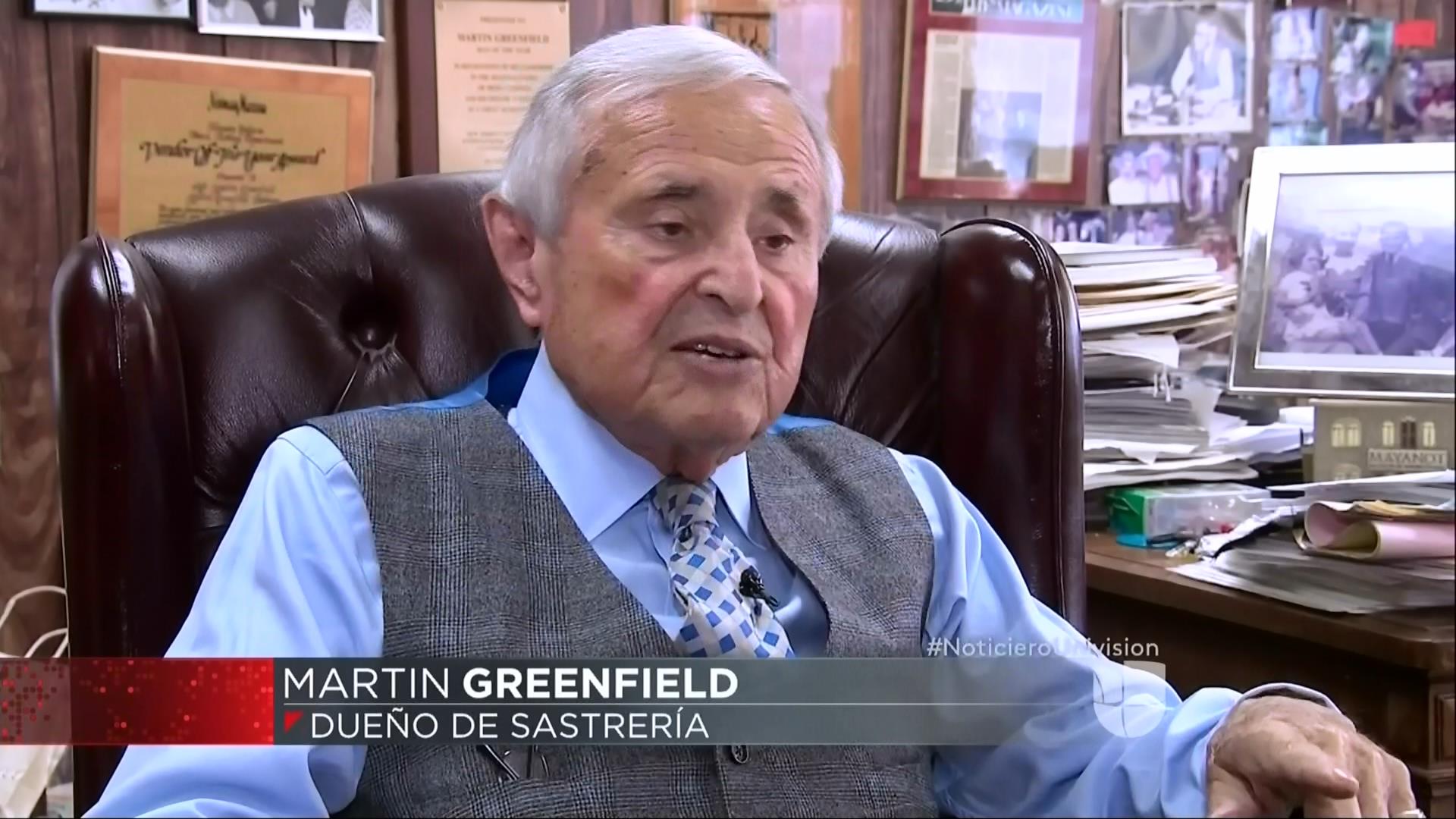 Profiles of immigrant success stories in the United States are frequent, welcome features on Univision.

A recent one featured the legendary holocaust survivor Martin Greenfield, who as a teenage boy famously asked the Jewish rabbi who accompanied the U.S. Army soldiers who liberated him from the Buchenwald concentration camp the haunting question “Where was God?" - and who would later go on to become tailor to U.S. Presidents and famous Hollywood stars and athletes alike.

Univision’s feature pointed out that the 88-year-old Greenfield has served Republican and Democratic Presidents alike, from Eisenhower to Obama. However, unlike the network’s online version of the feature, on television Univision completely hid from its viewers Greenfield’s connection to Republican presidential candidate Donald Trump, making no mention whatsoever of the considerable praise he has heaped on the Republican Party’s 2016 standard-bearer.

“Working with Mr. Trump has always been an honor,” says Greenfield in his 2014 memoir, Measure of a Man. “His larger-than-life style and brilliant business savvy have been a blessing to New York City, creating thousands of jobs,” Greenfield points out. “He’s a wonderful guy – and a terrific father who understands that life’s greatest investment is in one’s children,” underscored the legendary Holocaust survivor.

In addition to hiding Greenfield’s association with Trump, Univision also studiously avoided mentioning any of Greenfield’s positions on major issues facing the country. If they had, they probably would have heard views that align surprisingly closely with those of Mr. Trump, as Greenfield expressed during a talk about his Conservative Book Club featured memoir that he delivered last year at the Young America’s Foundation.

“You can change America to be like what it was,” Greenfield told the gathering of conservative youth in May 2015. “We don’t show enough strength” in dealing with ISIS, he said later on. On jobs and the economy, he opined “there are too many restrictions to start businesses” and “the country was created to create jobs, not to have the government give you money to live."

Finally, speaking of the American founding and immigration, Greenfield both waxed eloquent and again echoed Trump, saying of the founders “they put together something that was nothing in existence no place in the world, and now people want to change it. Don't change it…that's why we're so free here. That's why everybody wants to come here. They should come here legally.”

Ever the astute businessman, Greenfield has recently been more coy about the election and his views, noting that he’s fully prepared to tailor a suit for Hillary Clinton and that he is also close to former President Bill Clinton.

Below is the full transcript of the referenced feature on Martin Greenfield, which aired during the October 10, 2016 edition of Noticiero Univision.

MARIA ELENA SALINAS, ANCHOR, UNIVISION: They call him the “Tailor of Tailors”, a man of Jewish origin that survived the Holocaust and years later became a tailor for American Presidents and famous people. He says, that in essence, he is an immigrant, and to be an immigrant is what caused him to give work to other immigrants like him. From Brooklyn, New York, Blanca Rosa Vilchez introduces us to who everyone calls by his first name, Martin.

BLANCA ROSA VILCHEZ, CORRESPONDENT, UNIVISION: Maybe you don’t know him, but you see his work every day. Martin Greenfield is the tailor for the Presidents, from Eisenhower until Barack Obama.

MARTIN GREENFIELD, PRESIDENTIAL TAILOR: [in English] Everybody calls me Martin…

BLANCA ROSA VILCHEZ, CORRESPONDENT, UNIVISION: [translating Martin Greenfield] “Everybody calls me Martin, but I call them “Sir” because it’s my style,” says the Holocaust survivor.

BLANCA ROSA VILCHEZ, CORRESPONDENT, UNIVISION: [translating Martin Greenfield] “My father said to me every day that I was going to survive.”

BLANCA ROSA VILCHEZ, CORRESPONDENT, UNIVISION: It was at a concentration camp under Nazi Germany where he learned to sew. His entire family was killed there and he was liberated by American soldiers, and he immigrated to the United States.

BLANCA ROSA VILCHEZ, CORRESPONDENT, UNIVISION: In 1947, Greenfield arrived in New York with only $10 dollars in his pocket and he started to work in this factory. 30 years later, 80% of his personnel are immigrants, just like him.

BLANCA ROSA VILCHEZ, CORRESPONDENT, UNIVISION: Years later he became the owner of the business, Roberto Serrano was the first Latino to work here 49 years ago.

BLANCA ROSA VILCHEZ, CORRESPONDENT, UNIVISION: His [Martin’s] son credits the success of the business to the fact that the tailors do everything by hand.

TODD GREENFIELD, MARTIN’S SON: [in English] We go to the White House…

BLANCA ROSA VILCHEZ, CORRESPONDENT, UNIVISION: [translating Todd Greenfield] “We go to the White House, take the measurements, in the middle of an industry where now almost everything is mass-produced,” he says.

BLANCA ROSA VILCHEZ, CORRESPONDENT, UNIVISION: [Martin] says that at times, he’s left notes hidden in the pockets of President’s suits sharing his opinion. But which is his favorite President?

MARTIN GREENFIELD, PRESIDENTIAL TAILOR: [in English] I dress both sides of the aisle, the Democrats and the Republicans.

BLANCA ROSA VILCHEZ, CORRESPONDENT, UNIVISION: “Neither Democrats nor Republicans”, he says. “Here, we all make a living with our work for 60 years, like all the immigrants.” In Brooklyn, New York, Blanca Rosa Vilchez, Univision.