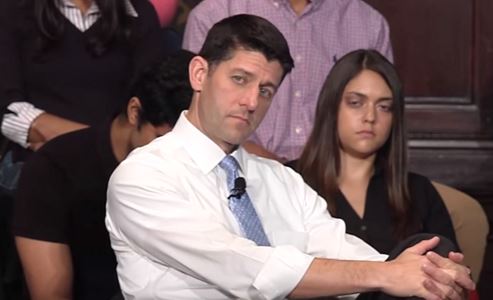 Leave it to Fusion, Univision’s sister English-language network, to once again find a way to smear House Speaker Paul Ryan and all Republicans when covering the Speaker’s latest statements on U.S. immigration policy.

The network’s report on Ryan’s remarks, titled Top Republican says some shockingly reasonable things about undocumented immigrants, paints the Speaker as out of step with most Republicans on immigration and specifically faults him for not working with President Obama to pass immigration reform legislation.

“The only problem with Speaker’s Ryan’s more inclusive vision of the Republican Party is that the two leading GOP presidential hopefuls, Donald Trump and Sen. Ted Cruz, disagree with his views,” writes Fusion’s Jorge Rivas. “That, and the speaker himself has refused to address immigration reform while President Obama is still in office,” Rivas adds.

Aside from the fact that Republican presidential frontrunner Donald Trump actually agrees with Ryan in terms of giving many of the undocumented currently in the country “the ability to get right with the law, to come in and earn a legal status,” Rivas’ characterization of Ryan being out of step with what most other Republicans say on the matter is also actually quite far off, and he is simply parrotting the standard liberal line on the subject.

Multiple scores of GOP senators and members of Congress support immigration reform and always have. They have found an untrustworthy and uncooperative partner, however, in the Obama administration, which has been systematically and unilaterally nullifying standing federal immigration statutes and law enforcement.

Paul Ryan's pro-legalization position is actually not at all unusual. According to several reputable polls, it's a position held by a majority of Republicans. 50% of all Republicans favor a path to citizenship while 56% of Republicans say undocumented immigrants currently living in the U.S. should be allowed to stay in this country legally if they meet certain requirements.

Ultimately, there is a policy difference between Republicans and Democrats on what final reform would look like, but reliably left-leaning media outlets like Fusion seem to only want to create the impression that Democrats and their allies are the only ones who get to define what immigration reform is.

What is under-reported in this one-sided pattern is that Senator Hillary Clinton once said "I am adamantly against illegal immigrants", that it was 5 incumbent Democrat Senators who asked President Obama to delay his 2014 executive actions on DAPA because it would hurt their re-election chances, and two other Democrat Senate candidates who attacked GOP rivals for their support of amnesty, Gunderson-Grimes and Mary Landrieu.  But of course, all this does not fit Fusion’s anti-Republican narrative, so it is swept under the rug.

Below are relevant excerpts from the April 28, 2016 Fusion article “Top Republican says some shockingly reasonable things about undocumented immigrants.”

JORGE RIVAS, WRITER, FUSION: Speaker Ryan, a descendant of Irish immigrants, discussed immigration in a more positive tone than his party’s presidential candidates, saying immigration is a “beautiful story that needs to continue in this country.” Unlike the majority of Republicans, who use the dehumanizing term “illegal immigrants,” Ryan opted for the phrase “undocumented immigrants.”

The only problem with Speaker Ryan’s more inclusive vision of the Republican Party is that the two leading GOP presidential hopefuls, Donald Trump and Sen. Ted Cruz, disagree with his views. That, and the speaker himself has refused to the address immigration reform while President Obama is still in office.