Seeking to make sense of what motivated Dylann Roof to shoot innocent worshipers at a historic black church in Charleston, S.C., to death, MSNBC contributor Eugene Robinson and MSNBC Hardball host Chris Matthews agreed that there was some mystical role that the "atmosphere" of hate in the Palmetto State played.

For his part, Matthews likened it to JFK's assassination in November 1963, insisting that although he was a leftist politically, Lee Harvey Oswald was affected by the climate of "right-wing" antipathy towards the president.

Oh, and of course Matthews and Robinson worked in the requisite liberal talking point about the need to pass more gun control laws. Here's the relevant transcript (emphasis mine): 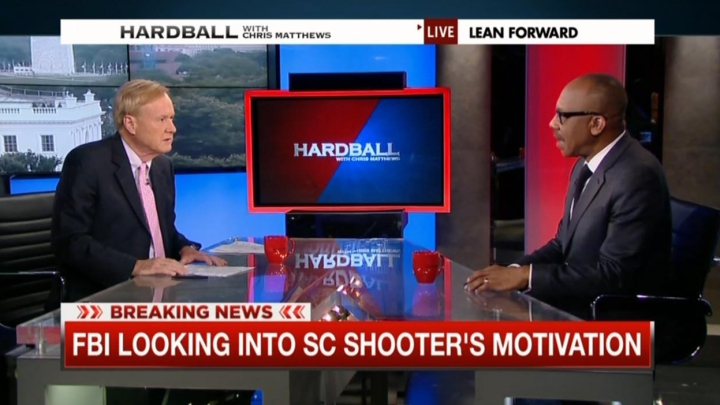 EUGENE ROBINSON: Look, I would consider it a crime of terrorism. I consider it, just, an abomination. And I think it is right that Charleston is so resilient and it's inspiring and we should look forward, but I'm not past the angry yet.  And the anger at him and those around him. I mean, there's more than a whiff of white supremacy in the air. It's still a stench. It's fainter than it used to be, but it's there. And somehow he breathed it in. He was in an environment in which, um, you know, this became meaningful to him. And so how did that happen? And how did he get the gun? You know, I've seen it reported that he was given the gun by a parent, a father perhaps, someone gave him a gun, knowing that he was a troubled kid. So why do you give him a gun? It, you know. You heard president Obama speaking almost with resignation about guns.  So that's what I wrote about for tomorrow's paper. I wrote about guns. It is what all these incidents have in common. I don't know how to stop hatred, I don't know how to stop mental illness, but we do know how to restrict people's ability to get guns. We know how to do that but we won't. We don't.

CHRIS MATTHEWS: Someone was saying today on I think one of the networks, that people should have guns in church so they can defend themselves.

MATTHEWS: What do you, have to holster up, put your gun on to go to church? That's a little odd.

Anyway, I do think you've got something there with the atmospherics and it's not all one person acting alone, it's always about something that gives moral license to certain kind of behavior.

MATTHEWS: I thought when Kennedy was killed down in Dallas that time in '63, I thought it was an atmosphere there--

MATTHEWS: --even though he [Oswald] was a man on the left and that [the city of Dallas] was on the right, it was atmospheric.