Taking a little breather from bashing "clown car" Republicans, MSNBC Hardball host Chris Matthews devoted one segment this evening to a softball interview with Reggie Love, President Obama's former "body man" -- an aide who essentially shadows the chief executive every waking hour of the day. Love was there to promote his new book, Power Forward: My Presidential Education, which serves essentially as a career/life-lesson sort of self-help book.

But Matthews missed an opportunity to ask the former special assistant to the president about the president's actions during the May 2011 bin Laden raid. As AWR Hawkins of Breitbart noted in August 2013, in a sit-down interview, Love essentially painted Obama as bored and disinterested in the former (emphasis mine): 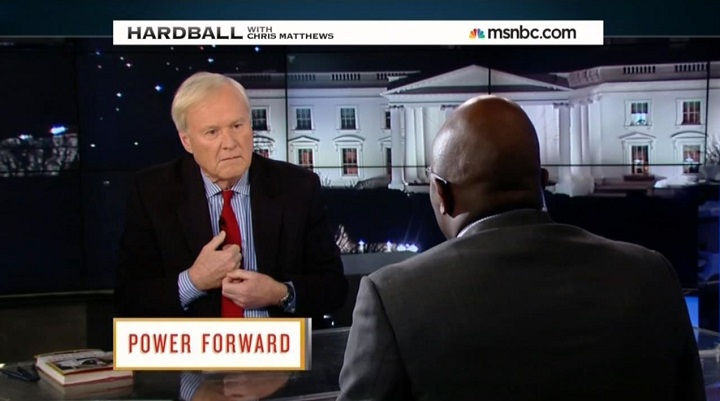 President Barack Obama expressed mainly disinterest on the night of the raid that killed Osama bin Laden, according to a high-level White House staffer.

Regarding May 2, 2011, Love said: “We sat around in the private dining room. Most people were like down in the Situation Room and [Obama] was like, ‘I’m not going to be down there, I can’t watch this entire thing.’ So he, myself, [White House photographer] Pete Souza, and Marvin, we must have played 15 hands, 15 games of spades.”

Love left the Obama White House in 2011, so he wasn't there for the fateful night of the Benghazi terror attacks on September 11, 2012. That said, probing him for what Obama was like during high-stress moments like the bin Laden raid would have been a compelling interview. Instead, Matthews asked questions like:

How 'bout breakfast in bed. Did he like that? Like in Downton Abbey? Did you bring the tray in?

But of course, this segment didn't happen to report news, it was purely an exercise in doing a solid for the president by promoting the memoirs of one of his former loyal staffers. Closing their chat, Matthews gushed (emphasis mine):

Congratulations on the book. By the way, it's gonna be-- This is fun, this is the kind of stuff I call food for junkies. This is good stuff. It's Power Forward -- a great name, a great title -- My Presidential Education. So now we know what it's like to be there, to be there in the room.