In the rush to heap praise on President Obama's move to normalize diplomatic relations with the totalitarian Castro regime in Cuba, a Daily Beast headline writer effused this afternoon, "Obama Smarter Than 10 Presidents on Cuba." 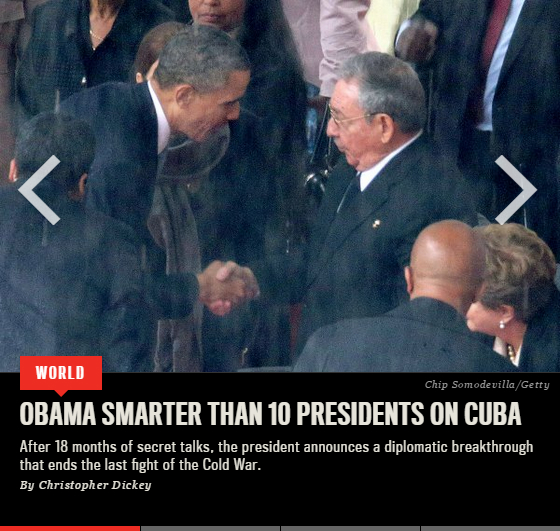 Every other country on the planet has chosen to economically engage Cuba, Dickey reminded his readers. [Of course, that being the case, surely Cuba should have progressed significantly in economic and political liberalization thanks to that trade, no?]

Ultimately time will tell as to the wisdom or folly of President Obama's move today, but it is utterly fatuous to pronounce it an unmitigated success before anything takes effect. What's more, it's also foolish to gloss over legitimate criticisms that President Obama, at the bare minimum, effected a very poor negotiation with Cuba, given the dearth of political and economic reforms that the Marxist regime has agreed to in return for normalized relations.

Obama's timing, additionally, seems incredibly poor, to say the least. Oil prices have been on a months-long downswing, seriously harming socialist Venezuela's economy and with it their ability to prop up the Castro regime's economy with subsidized oil. Opening up trade with the Castro regime effectively offers a much-needed economic shot in the arm when Castro desperately needs it, many would argue.

That being the case, isn't it absurd to close the deal to normalize relations now, with token concessions by the Castro regime to political liberalization, rather than stringing the Cubans along further, sweating them out at the negotiating table with a harder bargain?

These are questions that will be asked by critics, just not, it seems, on the digital pages of the Daily Beast.