On June 3, Miss Piggy received the Elizabeth A. Sackler Center for Feminist Art’s First Award at the Brooklyn Museum and publicly announced, “Moi is a feminist!” In a follow-up interview airing June 6, MSNBC reporter Irin Carmon took the opportunity to ask Miss Piggy, “Are you pro-choice?”

“I am pro – I am pro-everything,” Miss Piggy gushed.

(And would she have answered the same to “Are you pro-life?” But feminist reporters don’t ask that…)

During “The Rundown With José Díaz-Balart,” the host asked Carmon about the “world class exclusive interview” with the “feminist icon.”

Carmon smiled and responded, “All I can is it was a great honor to be flanked by two of my heroes growing up: Gloria Steinem and Miss Piggy.”

While the award was a “controversial decision,” Carmon stressed that “the folks who gave her this award say that [Miss Piggy] just goes for what she wants, she pursues her dreams and she never apologizes.” 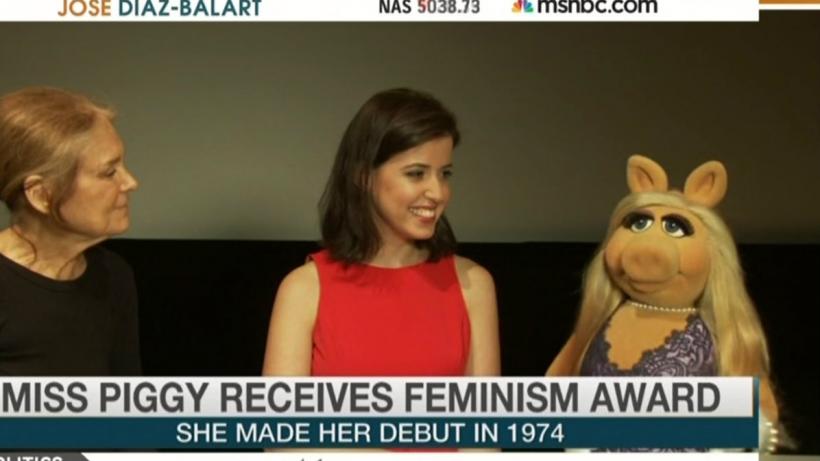 Carmon prompted Miss Piggy with other feminist-oriented questions as well during her interview, including “What’s the definition of feminism to you?” (“I think you’re looking at it”) and “Why not Ms. Piggy?” (“I’ve spent so much money marketing myself as Miss Piggy”).

In early 2004, The Walt Disney Company purchased the Muppets, originally owned by The Jim Henson Company.