The nearly 9 minute interview featured Blackstone heaping praise on the California Democrat while offering no critique of his liberal record in office. Instead, the CBS reporter spun Brown’s tenure as “solid” and “ahead of their time” and suggested that he bring his liberal governing style to Washington to "learn about how political problems have been solved here in California."

Blackstone began his softball interview by promoting how “last November voters rewarded him for leading California back from the brink. Electing him to an unprecedented fourth term as governor.” The CBS reporter eagerly spun the “secret to Jerry Brown’s success” as “raising taxes while cutting spending” even though the California liberal has proposed spending increases averaging 6.8 percent annually over the last three years, more than double the national average of 3.1 percent.

Despite Blackstone’s claim that Brown has been a fiscally responsible governor, the CATO Institute scored him as the worse governor in America, giving him an ‘F’ on their Fiscal Policy Report Card on America’s Governor’s 2014. Instead of fact-checking Brown’s liberal spending record, Blackstone proclaimed him to be a “famously frugal” governor: 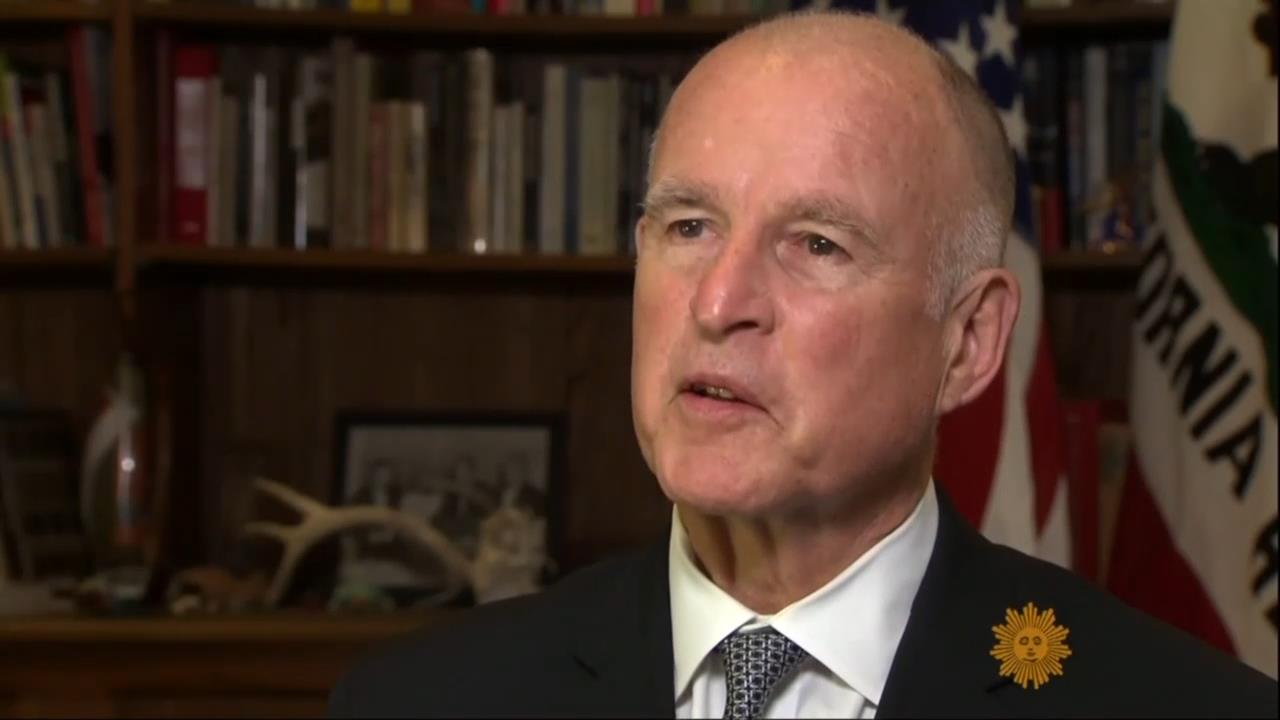 [He] dispensed with the limos and private planes of his predecessor, Ronald Reagan, favoring blue Plymouth sedans..In office, his track record was solid, but Brown also pursued ideas that were ahead of their time. An advocate for the environment and alternative energy, he even wanted the state to launch its own research satellite.

Brown is limited from running for reelection in 2018 but that didn’t stop Blackstone from concluding the interview by speculating about the California Democrat’s future political ambitions:

The long strange journey of Jerry Brown is far from over. And in the man who spent much of his life wielding power, you can still recognize the searching seminarian who 40 years ago found himself at the helm of his state. 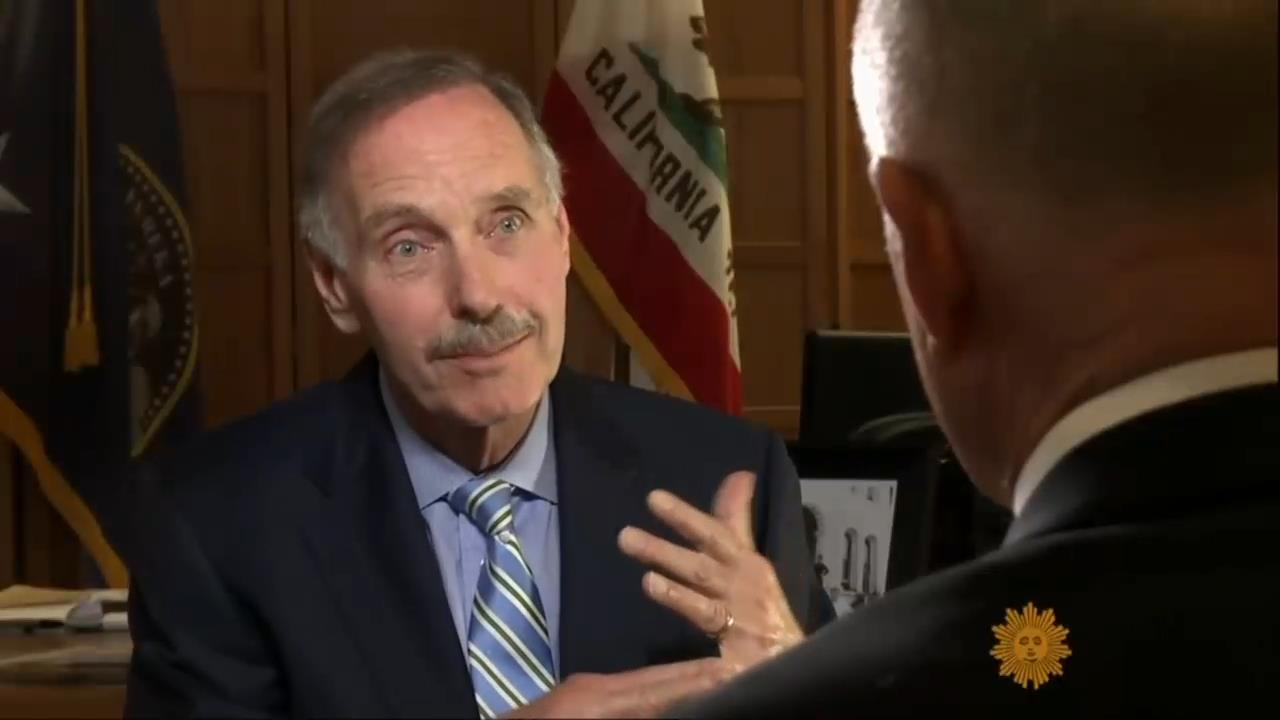 CHARLES OSGOOD: From out of the west came last week that image, Jerry Brown being sworn in for his fourth term as California's governor. The ceremony represented a personal milestone and took place as his state is experiencing a remarkable comeback. John Blackstone will report our cover story.

JOHN BLACKSTONE: Six years ago the sun appeared to be setting on the California dream. Plummeting home prices and soaring debt were robbing the Golden State of its luster. As we reported on "Sunday Morning" back then, plenty of Californians were ready to give up hope. Is the California dream kind of dying?

UNKNOWN PERSON: It's not dying, it's dead.

BLACKSTONE: It was a crisis to be sure, but in politics, crisis is just another word for opportunity.

JERRY BROWN: The state was in massive debt, 27 billion. There was great uncertainty. Over a million people had lost their jobs. Well that was then. Now California is coming back.

BLACKSTONE: Is that your doing?

BROWN: It's in part my doing, certainly.

BLACKSTONE: It's hard to imagine who would have wanted to become governor of a state that was in such a sorry state. But in 2010, Jerry Brown certainly did. And last November voters rewarded him for leading California back from the brink. Electing him to an unprecedented fourth term as governor.

BROWN: Come on in, I think we’re going to sit over here.

BLACKSTONE: The state once again boasts the world's 8th largest economy, bigger than Russia's. And it even posted a budget surplus last year. The governor regularly receives foreign dignitaries, befitting California's status as a hi-tech superpower.

BROWN: To the extent that climate change occurs and it is occurring and droughts, extreme weather, that will accelerate immigration.

BLACKSTONE: The secret to Jerry Brown's success? Raising taxes while cutting spending. Policies that have angered his fellow Democrats nearly as much as Republicans. You had to push Democrats in California to accept a lot of the cuts that you proposed.

BROWN: I still have to push, Democrats and Republicans. There's endless desires. The way I say it is first you have a desire, and then you make it a need, then you make it a right, and pretty soon you got a law. Then as soon as you got a law you got a lawsuit. You got to be able to say no. Because this government is not something you just milk forever. [Clip] Because as you know, I don't like to spend money. But that's not because I'm conservative it's just because I'm cheap.

BLACKSTONE: For decades Jerry Brown has always chartered unique course in politics. His father, Pat Brown, was elected governor of California in 1958. Edmund Brown Jr. was hardly the heir apparent. At the time he was studying to become a Jesuit priest. But politics proved to be his true calling.

BLACKSTONE: And In 1974 Jerry Brown won his father's old job.

BROWN: [CLIP] It is a unique experience at the age of 36 to find myself elected governor of the largest state in the union.

BLACKSTONE: He encountered a political landscape that's all too familiar today.

BROWN: An election is not an end, rather it's a beginning. It’s fair to say that people want a new spirit but they don't want to pay a lot of money for it.

BLACKSTONE: Famously frugal, Brown dispensed with the limos and private planes of his predecessor, Ronald Reagan, favoring Blue Plymouth sedans. He was a creature of the 1970s and the bachelor governor made waves for dating singer Linda Ronstadt. In office, his track record was solid, but Brown also pursued ideas that were ahead of their time. An advocate for the environment and alternative energy, he even wanted the state to launch its own research satellite. Brown's stellar ambitions earned him a long-lasting nickname. Have you finally purged governor moonbeam.

BROWN: That was a little moniker that I had to live with for a while but it was a reflection of the fact that we were trying to do very innovative things that seemed a bit outlandish then.

BLACKSTONE: His presidential ambitions were no less outlandish. He ran three times and each time he found his campaigns at odds with the Democratic establishment.

BROWN: [CLIP] It's a cause they can't buy. A force they can't stop. On Tuesday don't vote for me, vote for yourself.

BLACKSTONE: Today at age 76 Jerry Brown is the establishment. An exemplar of the adage, what goes around comes around. The path back to Sacramento wasn't easy. He served as mayor of Oakland, then attorney general before running a heated race to succeed Arnold Schwarzenegger.

BROWN: People know California is not perfect, we got our problems, but boy what momentum do we now have.

BLACKSTONE: His last re-election was easier. He swept back in to office with 59% of the vote.

BROWN: At this stage everybody pitching in.

BLACKSTONE: He also convinced voters in the drought-stricken state to approve a $7.5 billion plan that includes new reservoirs, dams and water tunnels. And Brown remains committed to building a controversial high speed rail line from San Francisco to Los Angeles.

BROWN: Well If I could use a biblical admonition, “he who perseveres will be saved.” And perseverance is something I learned very early in life And I wouldn't be here as governor these many decades later if I didn't have that habit of sticking to it.

BLACKSTONE:  Is it frustrating to be 40 years later fighting the same battles?

BROWN: Think about the alternative. To be frustrated is a real pleasure.

BLACKSTONE: If Brown has mellowed in recent years, many attribute it to his 2005 marriage to Anne Gust a former executive with the Gap. For both of them it was their first marriage. You got married you said after 15 years of dating, you were pushed, do I understand correctly? You were pushed?

BROWN: Not pushed, no, just due diligence.

BLACKSTONE: You just decided it was time.

BLACKSTONE: They’ve evolved  into a working partnership as well. With Gust-Brown serving without pay as special counsel to the governor.

BLACKSTONE: He gave you the title, counsel?

BLACKSTONE: How do you give that counsel?

GUST: Yes. I try not to do it publicly. Usually I start it with Edmund. When I'm really giving him serious advice I'm usually calling him Edmund. But Jerry, I have to give him a lot of credit because he really listens.

BLACKSTONE: You're always willing to change your mind?
GUST: I didn't say that. I did not say that.

BROWN: Well, I’ve been accused of that. But I'm interested in what’s true, what is the circumstance and that takes a clarity of mind and an openness and some ways maybe some humility but I do strive for that.

BLACKSTONE: Humility is not a term often heard in politics, here in Sacramento and certainly not in our nation's capitol. Does Washington have some things to learn about how political problems have been solved here in California?

BROWN: Well in Washington some of the people are afraid to pass a tax because it affects the economy. Well we created a million jobs with that new temporary tax. But we also cut and we've made cuts that I think even in Washington they have been reluctant to do. They got to get out of their comfort zone, give up the ideological edges and find what it means to be an American at heart.

BLACKSTONE: The long strange journey of Jerry Brown is far from over. And in the man who spent much of his life wielding power, you can still recognize the searching seminarian who 40 years ago found himself at the helm of his state. If you could say something to that 36-year-old now, is there some advice you might give him?

BROWN: You know, I don't know that you can give advice to young men in a hurry. I don't think I would have listened to it if I had heard it then?

BLACKSTONE: Are you still in a hurry?

BROWN: I don't feel quite in a hurry, but I do feel the same zeal, virtually every morning I get up excited about what I'm doing, ready to dig in and I can't even explain to you why. I just love being governor. I like what I'm doing. And I think we're making some progress.